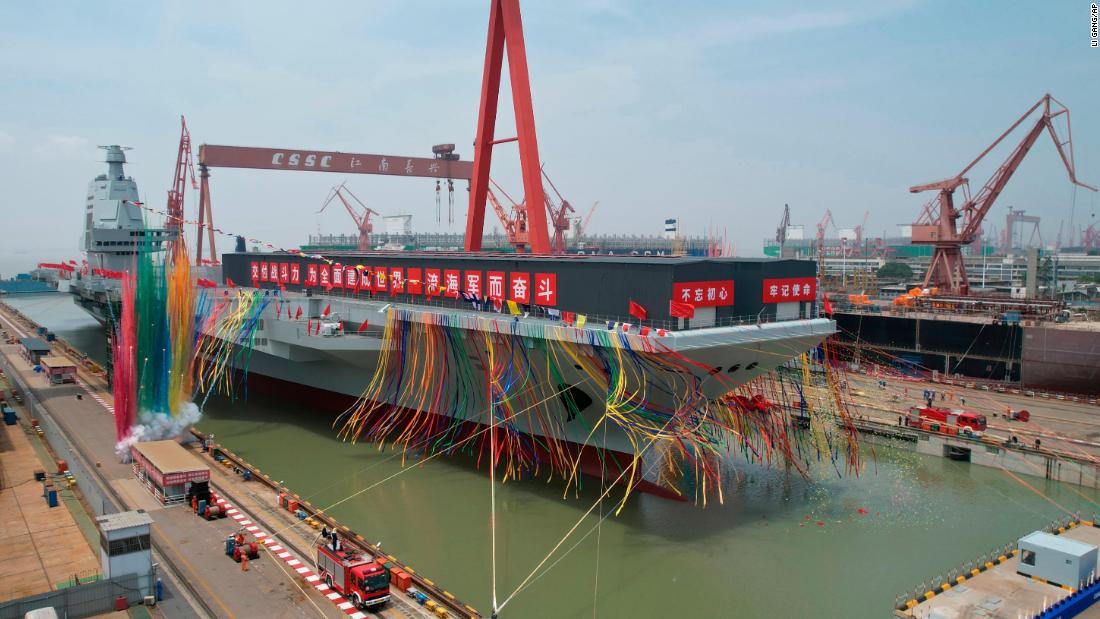 The new system, similar to the ones used by US aircraft carriers, will allow China to launch a wider variety of aircraft from the Fujian faster and with more ammunition.

In addition to the launch system, the Fujian is equipped with blocking devices, and a full-load displacement of more than 80,000 tons, Xinhua reported, adding that the ship will carry out mooring tests and navigation tests after the launch.

Matthew Funaiole, senior fellow at the CSIS’s China Project, told CNN previously that the new ship would be the Chinese military’s “first foray into a modern aircraft carrier.”

“This is a pretty significant step forward,” he said. “They’ve really committed to building out a carrier program, and they continue to push the boundaries of what they’re able to do.”

China names its aircraft carriers after its coastal provinces, with Liaoning in the northeast and Shandong in the east. Fujian, in the southeast, is the closest province to Taiwan, separated by a strait that is less than 80 miles (128 kilometers) wide at its narrowest point.

China’s ruling Communist Party claims sovereignty over the self-ruling democracy of Taiwan, despite having never ruled it. Chinese leader Xi Jinping has repeatedly said that “reunification” between China and Taiwan is inevitable and he refused to rule out the use of force.

China now wields the largest naval force in the world, and aircraft carriers are the core vessels of any major power’s fleet. The massive ships are essentially a mobile airbase, allowing for the rapid, long-term deployment of aircraft and weaponry to a combat theater.

China’s naval buildup comes amid growing geopolitical tensions with the US, which under President Joe Biden is seeking to strengthen ties with allies and partners in the Asia-Pacific region to counter Beijing’s growing economic influence and military might.
Last year, Beijing bristled at a security pact between the US, the UK and Australia named AUKUS, an agreement by which the three nations would exchange military defense information and technology to form a closer partnership in Asia. The naval exercises attended by members of the resuscitated informal dialogue between the US, Japan, Australia and India, known as the Quad, has further unsettled Beijing.

China’s first aircraft carrier, the Liaoning, was an unfinished Soviet-era vessel that Beijing bought from Ukraine in 1998, updated and finally commissioned in 2012.

The Chinese military used the technological knowledge it gained from that vessel to build its first domestically constructed carrier, the Shandong, which entered service in December 2019.

But although China’s two initial aircraft carriers increased its naval power, their capability was still far behind the US, which has a total of 11 of the vessels in service.

In addition, both the Liaoning and the Shandong were based on outdated Soviet technology. Those two carriers used the ski-jump launching system, where planes would simply take off from a slight ramp, while US carriers use a more advanced catapult system to launch their aircraft.

Aircraft launched by catapults can get airborne quicker and with greater quantities of fuel and ammunition, giving them an advantage over planes launched by ski jump, which on their own power when lifting off.

However, despite the advanced launch system, CSIS’ Funaiole said there are still signs the Chinese carrier lags behind its US counterparts, which have more catapults, a larger airway and more elevators to allow for quicker deployment of aircraft.

All US aircraft carriers are also nuclear-powered, while the Fujian is believed to run on conventional steam propulsion, which Funaiole said would limit its reach. “(Although) this may be less of a factor for China right now as many of its interests are in the near seas,” he said.

Following its launch, the Fujian will need to be tested and fully outfitted before it is fit to be commissioned and officially enter service.

Initially the US Department of Defense had estimated the carrier to be ready for active service by 2023, but it has now pushed that date back to 2024.

The Shandong aircraft carrier also took two years from launching in 2017 to when it finally entered service in 2019. Moreover, the Fujian could struggle to operate the electromagnetic launching technology for its catapults.

Even the US has had difficulty utilizing the same system on its latest carrier, the USS Gerald R. Ford, leading to lengthy deployment delays.