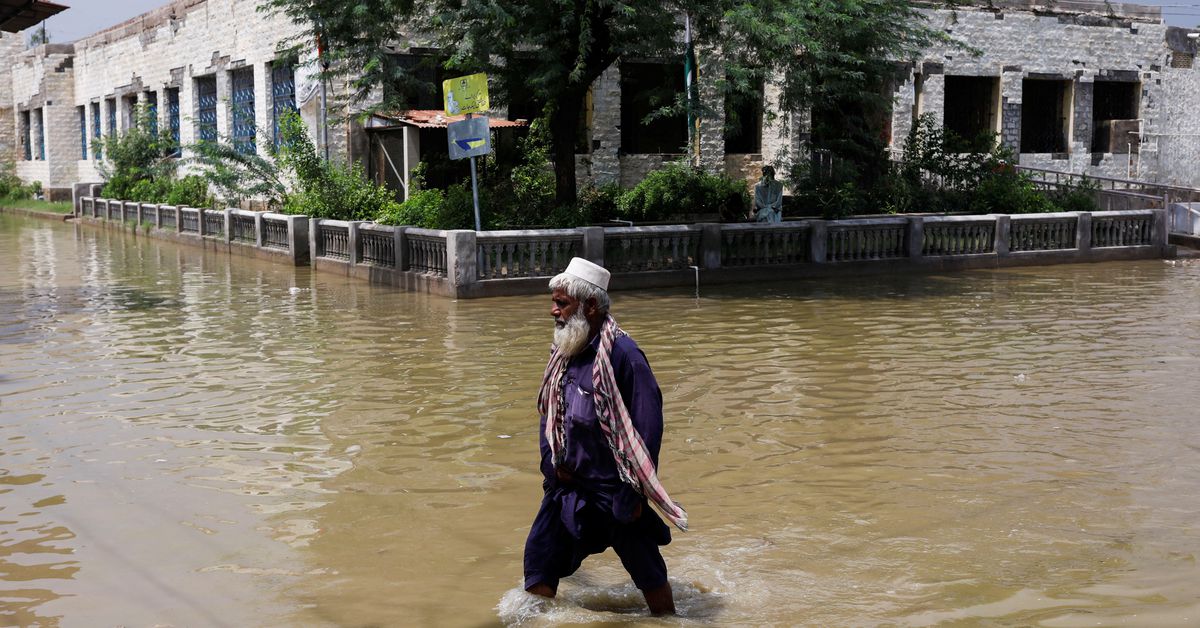 JACOBABAD, Pakistan, Aug 31 (Reuters) – Not long ago, Sara Khan, principal at a school for disadvantaged girls in Jacobabad in southern Pakistan, looked on in alarm as some students passed out from the heat – the city was the world’s hottest at one point in May.

Now, after heavy monsoon rains submerged large parts of the country, her classrooms are flooded and many of the 200 homeless students, struggling to get enough food and caring for injured relatives.

Such extreme weather events in a short space of time have caused havoc across the country, killing hundreds of people, cutting off communities, wrecking homes and infrastructure and raising concerns over health and food security. read more

Jacobabad has not been spared. In May, temperatures topped 50 Celsius, drying up channel beds and causing some residents to collapse from heatstroke. Today, parts of the city are under water, though flooding has receded from its peak. read more

In Khan’s neighborhood in the east of the city, houses have been badly damaged. On Thursday, she said she heard cries from a neighbour’s house when the roof collapsed from water damage, killing their nine-year-old son.

Many of her students are unlikely to return to school for months, having already lost class time during the brutal summer heatwave.

“Jacobabad is the hottest city in the world, there are so many challenges … before people had heatstroke, now people have lost their homes, almost everything (in the flood), they have become homeless,” she told Reuters.

Nineteen people in the city of around 200,000 are confirmed to have died in the flooding, including children, according to the city’s deputy commissioner, while local hospitals reported many more were sick or injured.

More than 40,000 people are living in temporary shelters, mostly in crowded schools with limited access to food.

One of the displaced, 40-year-old Dur Bibi, sat under a tent in the grounds of a school and recalled the moment she fled when water gushed into her home overnight late last week.

“I grabbed my children and hit them out of the house with bare feet,” she said, adding that the only thing they had time to take with them was a copy of the Koran.

Four days later, she has not been able to obtain medicine for her daughter who is suffering from a fever.

“I have nothing besides these kids. All of the belongings in my home have been swept away,” she said.

The level of disruption in Jacobabad, where many people live in poverty, demonstrates some of the challenges extreme weather events linked to climate change can create.

“A manifestation of the more frequent and more climate change of extreme weather events, and this is exactly what we have experienced intense occurrence in Jacobabad as well as elsewhere globally during the past few months,” said Athar Hussain, head of the Center for Climate Research and Development at COMSATS University in Islamabad.

A study earlier this year by the World Weather Attribution group, an international team of scientists, found that the heatwave that hit Pakistan in March and April was made 30 times more likely by climate change.

Global warming likely exacerbated recent flooding as well, said Liz Stephens, a climate scientist at the University of Reading in Britain. That’s because a warmer atmosphere is able to hold more moisture, which is eventually unleashed in the form of heavy rains.

Pakistani Foreign Minister Bilawal Bhutto-Zardari said the country, which is heavily dependent on agriculture, was reeling.

“If you are a farmer in Jacobabad… you couldn’t plant your crops because of water scarcity and the heat during the heatwave and now your crops have been damaged in the monsoons and floods,” he told Reuters in an interview.

Hospitals that set up emergency heatstroke response centers in May are now reporting an influx of people injured in the floods and patients suffering from gastroenteritis and skin conditions amid unsanitary conditions.

Jacobabad Institute of Medical Sciences (JIMS) said it had treated around 70 people in recent days for injuries from debris in floods including deep cuts and broken bones.

More than 800 children were admitted to JIMS for gastroenteritis conditions in August during heavy rains, compared to 380 the previous month, hospital data showed.

At the nearby Civil Hospital, where the grounds are partially underwater, Dr Vijay Kumar said cases of patients suffering from gastroenteritis and other illnesses had at least tripled since the floods.

Rizwan Shaikh, head officer at Jacobabad’s Meteorology Office, recorded a high temperature of 51 degrees in May. Now he is tracking persistent heavy rainfall and notes with alarm that there are two more weeks of the monsoon season to go.

“All the districts are in a very tense situation,” he said.