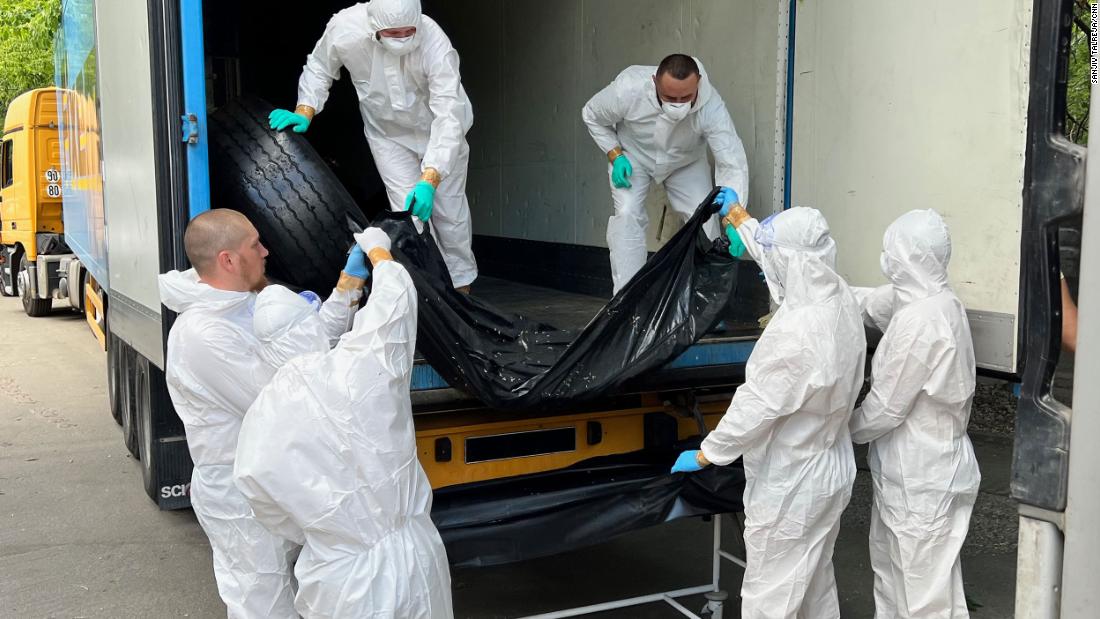 Dressed in full protective suits and masks they lower body bags, one by one, onto gurneys and roll them inside. Investigators stand back, clipboards in hand, waiting to start their grueling work.

Inside each bag is a “John Doe,” a person whose remains have been left in the bad of war for weeks and are so badly decomposed that they are unrecognizable.

“Of course, it’s hard. But this is not an ordinary job. It is a desire to help,” said Olena Tolkachova, chief of family services for the Azov Regiment.

Thousands of Ukraine’s war dead are unidentified. Police, soldiers, investigators, morticians and forensic experts — desperate to return remains to loved ones — are working tirelessly to find out who they are, so their bodies can be laid properly to rest.

In most cases, only DNA analysis can provide the needed answers.

The 64 bodies that arrived the day CNN visited the morgue were retrieved from the Azovstal steel plant, one of the last holdouts for Ukrainian defenders in the port city of Mariupol, where fighters finally surrendered in mid-May.

They were handed over by Russian forces in exchange for 56 of their own dead fighters, Tolkachova said.

The body of Daniil Safonov, a 28-year-old Ukrainian policeman who became popular on social media for posting updates from the frontlines, was believed to be among the remains recovered from Azovstal.

“Holding the line, but it’s very difficult,” he posted on Twitter on April 3. “If I don’t write any more, I’m sorry, we did everything we could. Glory to Ukraine!”

But when Olha Matsala, Safonov’s sister, examined, what were said to be his remains at the Kyiv morgue she she she could not distinguish any of his features. Safonov is believed to have been killed in a mortar attack in early May; his body he had lain in the heat for almost six weeks.

“He was an extremely good man. He gave his life for Ukraine. He told me he accepted he may never return from Mariupol, and I feared that’s what happened,” Matsala said.

But tucked into the pocket of Safonov’s uniform was the evidence needed to identify him: Two small crayon drawings from his 6-year-old son, one of a Christmas tree, the other of a rain cloud, somehow still intact.

“This makes it easier,” Matsala said, crying. “Now, I can bury him, and I will be calmer knowing his grave ele is nearby. I was waiting for him.”

Her relief is rare. In nearly every case, the only hope for identification is through DNA analysis, but it’s a lengthy and complex task.

The process begins inside the morgue, where morticians extract tissue samples from the dead. Because of the bodies’ advanced states of decomposition, often a piece of bone is the only option.

The samples are delivered to a Kyiv laboratory, where analysts work to build DNA profiles.

“If the bone is disintegrating, we must make dozens of attempts to pull a DNA profile. Sometimes it can take months, but we never stop trying,” said Ruslan Abbasov, the head of the DNA laboratory of the Ministry of Internal Affairs.

“We work 24/7 to help Ukrainians find their loved ones. We hope that we will be able to name each victim, identify every serviceman. And to bury them with dignity.”

Using special software, a forensic expert then tries to find a match to the remains by comparing the John Doe’s DNA to a government database of thousands of people searching for their loved ones.

“The more profiles we have, statistically, the more matches we make. It’s obvious we don’t have enough DNA from relatives of the missing persons,” said Stanislav Martynenko, chief forensic expert at the lab.

“It will take years after the war ends to find all the unidentified human bodies.”

Of the 700 unidentified bodies so far catalogued, 200 have been matched to a family so far, according to Abbasov.

Martynenko is behind many of those identifications. “When I make a match, I feel like I’ve done my job,” he told CNN. “And I need to inform everyone about this match starting with the police.”

To widen the government database, authorities have set up a hotline for families to report a missing person and arrange to give a DNA sample at a local police station. About 1,000 people have come forward to do so since Russia invaded Ukraine in late February.

But some of those lost to this war will likely never be returned to their families.

“Some bodies are so damaged it is impossible to extract DNA,” Tolkachova, of the Azov Regiment, explained through tears. “We have parents who tell us: ‘I understand you cannot find my child, but at least bring me some of the dirt they walked on from Mariupol to bury.'”

Her voice conveys the agony felt by those who will never know the fate of their loved one, never receive a body to bury, and perhaps never find closure.

That’s the outcome that Ukraine’s forensic experts are working so hard to avoid. But with more remains arriving day by day, and the war grinding on in Ukraine’s east and south, the task is daunting.

Daria Markina and Yulia Kesaieva contributed to this report.