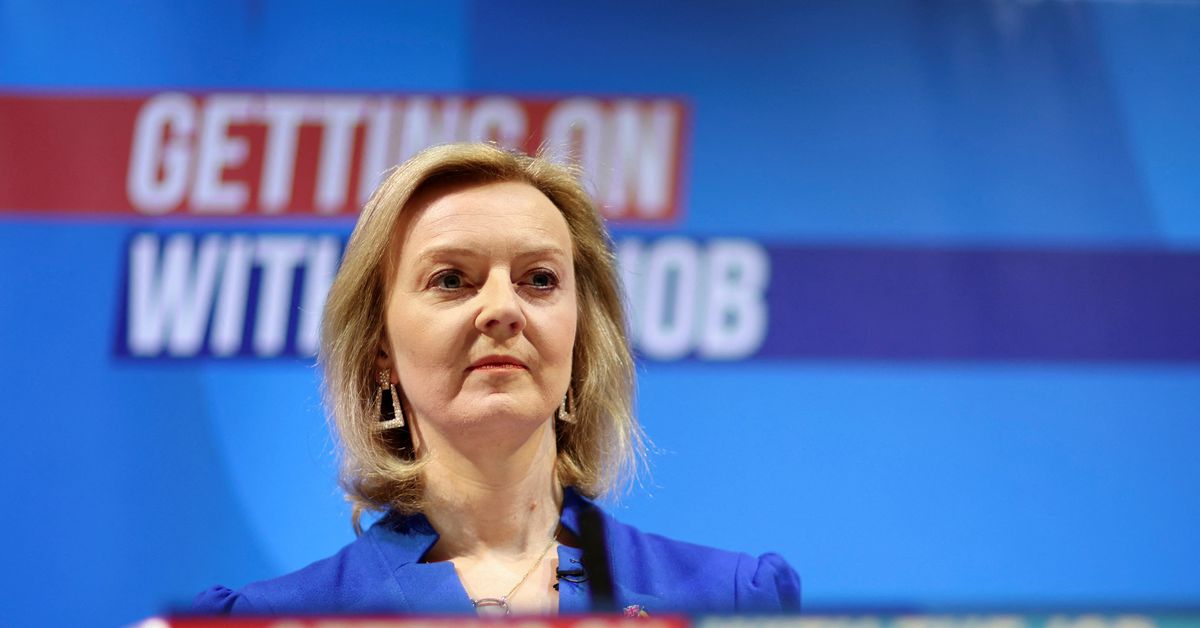 LONDON, July 11 (Reuters) – British Foreign Secretary Liz Truss has entered the race to replace Boris Johnson as prime minister on Monday, taking the number of candidates in an increasingly bitter and unpredictable contest to 11.

Truss, who has held ministerial jobs in a number of government departments including trade, justice and the treasury, said she would cut taxes and maintain a tough line against Russian President Vladimir Putin.

Johnson was forced out last Thursday after his government imploded over a series of scandals.

The contest is for the leadership of the ruling Conservative Party, with the winner then becoming prime minister. The aim is to find a successor by early September.

“I will lead a government committed to core Conservative principles: low taxes, a firm grip on spending, driving growth in the economy, and giving people the opportunity to achieve anything they want to achieve,” she said in a campaign video.

The race followed one of the most remarkable periods in modern British political history, when more than 50 government ministers and aides quit, denouncing Johnson’s character, integrity and inability to tell the truth.

With many lawmakers unhappy with the disgraced Johnson remaining in office until a successor is found, the party is looking to accelerate the election process.

Lawmakers will have to whistle the candidates down to a final two by July 21, before the postal ballot of the Conservative Party’s 200,000 members takes place over the summer.

Bob Blackman, a Conservative lawmaker who sits on the executive of the 1922 Committee which sets the rules, said the process would be finalized on Monday evening. He expected candidates to have to pass a certain level of support by lawmakers initially, before further ballots decide final two.

“(They) will start to have to require 20 MPs (members of parliament) to get on the ballot paper and 36 to get through to the second round,” he told the BBC, referring to stages taking place on Tuesday and Wednesday respectively.

The issue of tax cuts was fast becoming the central battle in the race with nearly all of the promising candidates to cut business or personal taxes.

Setting out her pitch, Truss said she would reverse the recent rise in National Insurance contributions and signaled a cut to corporation tax.

Former finance minister Rishi Sunak is the early front runner, but he is the only candidate who has played down the prospect of imminent tax cuts, saying the adoption of “comforting fairy tales” would leave future generations worse off.

This has prompted his rivals to attack his economic record after the tax burden rose to the highest level since the 1950s. One lawmaker confirmed that the dossier criticizing Sunak’s record had been circulating on lawmaker WhatsApp groups.

Nadhim Zahawi, appointed finance minister in the turmoil of last week, said he was also being targeted by rivals after media reports raised questions about the former businessman’s personal finances and tax record.

Whoever wins the leadership race will be faced with a daunting in-tray.

Britain’s economy is facing rocketing inflation, high debt, and low growth, with people coping with the tightest squeeze on their finances in decades, all set against a backdrop of an energy crunch exacerbated by the war in Ukraine which has felt fuel prices soaring.

On the issue of immigration, all the main leadership candidates have pledged to keep the government’s policy of sending asylum seekers to Rwanda, showing how the party has moved to the right of the political spectrum in recent years.

Other candidates include the attorney general, Suella Braverman, the chair of parliament’s foreign affairs committee Tom Tugendhat, and the transport secretary Grant Shapps.

One Conservative member of parliament said he was astonished by the number of his people entering the leadership contest.

“I shouldn’t be surprised by the ambitions and the delusions of some of my colleagues, but I am,” he said. “I expect we will narrow down the list of candidates very quickly.”

The opposition labor leader Keir Starmer in a speech took aim at an “arms race of fantasy economics” from the Conservative leadership candidates, claiming that more than 200 billion pounds ($239 billion) of commitments made by them over the weekend were unfunded.

Johnson has declined to endorse any of the candidates.