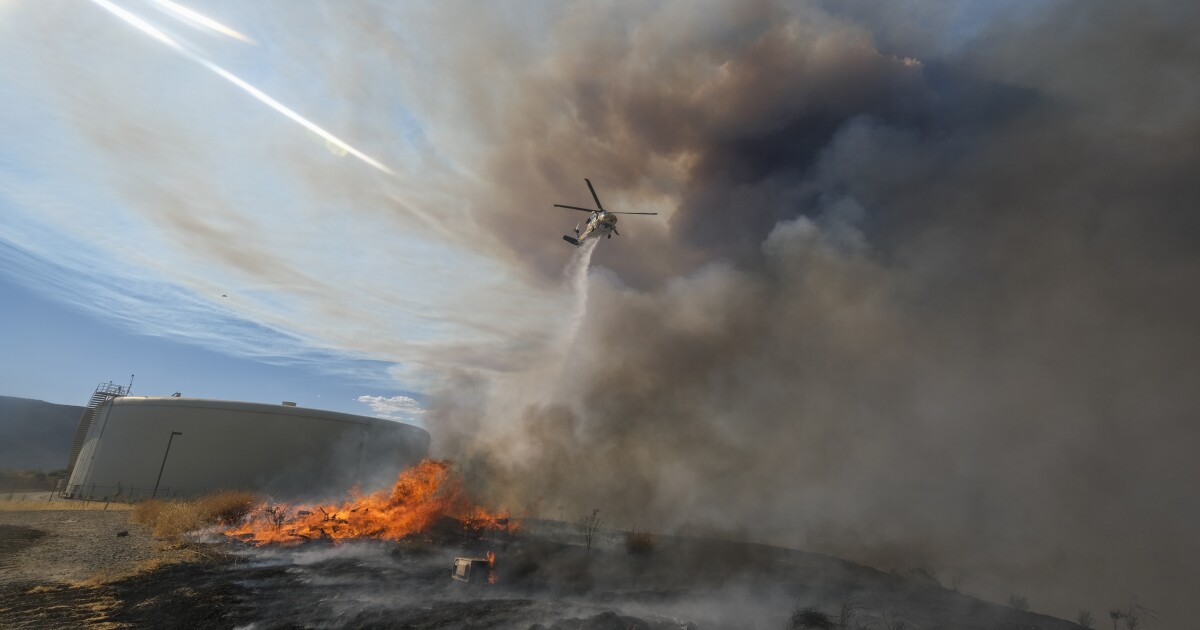 Southern California experienced its most intense heat wave of the year Thursday as firefighters battled large fast-moving blazes that forced evacuations. Meanwhile, the possibility of rolling blackouts loomed over the state after officials announced a Flex Alert because of an extreme power demand.

The heat wave is expected to last into next week, perhaps as late as Wednesday, bringing high temperatures to both inland and coastal areas and heightening fire dangers.

Firefighters made some progress Thursday in their battle against a wildfire near Castaic that had burned more than 5,000 acres overnight, but fire officials said the high temperatures and fire conditions faced by firefighters on the front lines should serve as a warning of the extreme fire risk in the days ahead.

“It should be a wake-up call to us all,” said US Forest Service Fire Chief Robert Garcia. “The days ahead are going to be very challenging.”

The fire, called the Route fire, exploded across 5,208 acres overnight and was 12% contained by Thursday morning, according to an incident update by the Los Angeles County Fire Department.

One home was destroyed, and 550 other structures remained threatened by fast-moving flames that Garcia described as “explosive fire behavior.”

All of the firefighters were treated and released, but the number of injuries also served as a reminder to fire officials of the extreme conditions firefighters are expected to confront on the front lines Thursday and in the coming days as the heat wave, and dangerous fire conditions , linger in the region.

“For our folks that are out there, they don’t have the opportunity to go into an air-conditioned environment,” Ewald said. “They’re on the line, they’re not in the shade. Their No. 1 tool is hydration and preparation.”

Nine helicopters and two fixed-wing planes were used throughout the night to fight the fire. The aircraft were in the air by 6:30 am Thursday, dumping fire retardant and water to put out hot spots and establish a perimeter around the fire.

But the heat wave and extreme fire conditions across the state are also threatened to spread resources thin. Fire officials made sure to launch aircraft early Thursday morning, mindful that they could be amused to a fire threatening homes near the US-Mexico border.

The fire was first reported along the 5 Freeway near Lake Hughes Road just after noon Wednesday, leading to full lane closures in both directions. According to the California Department of Transportation, one northbound lane and two southbound lanes between Lake Hughes Road and Templin Highway remained closed Thursday. There was no timeline on when they might reopen.

The blaze also led to evacuation orders for north of Northlake Hills Elementary School and south of Templin Highway. Evacuation orders for the Paradise Ranch Estates mobile home park — east of the 5 and west of Castaic Lagoon, were lifted by Thursday morning.

Little said the blaze was being driven by fuels patched by years of drought.

Woodland Hills reached 112 degrees, breaking the previous record for the date of 111 degrees set in 1998, according to the National Weather Service in Oxnard.

The temperature could continue climbing “and probably isn’t done yet,” meteorologists said.

Burbank’s high of 112 broke the previous daily record of 108 degrees set in 2017, and Sandberg reached 100 degrees, exceeding the previous high of 98 degrees, also in 2017, the weather service said.

Authorities are worried about power capacity in part because high temperatures are forecast not just across inland regions that typically broil this time of year, but also along many parts of the coast. That could mean many more people turning on their air conditioners during peak hours.

Officials are asking Californians to limit electricity use when possible to minimize strain on the state’s energy providers, otherwise risking rolling blackouts. Losing power during such extreme heat can be highly dangerous, if not deadly, especially for the most vulnerable.

California officials on Wednesday issued a statewide Flex Alert, as most of the state experienced extreme heat. A second Flex Alert was issued for Thursday.

During a Flex Alert, consumers are urged to reduce their electricity use from 4 to 9 pm, when the grid is most stressed because of high demand and less available energy from solar panels.