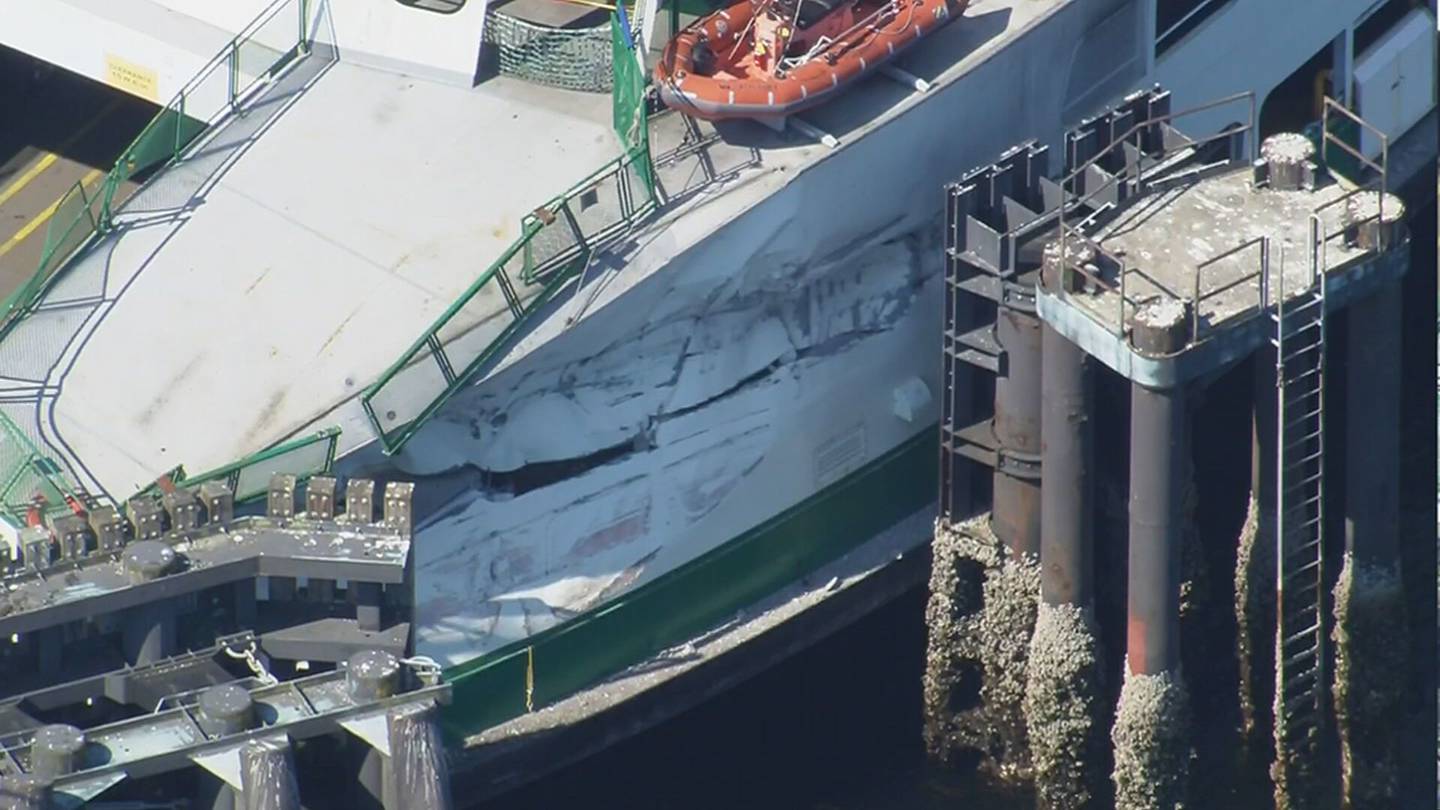 SEATTLE — The Fauntleroy terminal has reopened after the Cathlamet ferry crashed into a “dolphin” at the terminal on Thursday morning, causing damage to cars and significant damage to the ferry.

A “dolphin” is part of the ferry terminal that helps guide the boat into the dock.

At least two cars were crushed upon impact. No injuries were reported, according to Washington State Ferries.

Just past 10 am, the Seattle Police Department started to turn away all traffic at the Fauntleroy terminal.

The terminal reopened after the US Coast Guard investigated what WSF called a “hard landing.” The Cathlamet was moved out of the terminal and made several stops for crewing purposes before heading to the Eagle Harbor maintenance facility for repairs.

The dock structure at the terminal was examined and has been determined to be usable. With service restored, the vessels Issaquah and Kitsap will serve the Fauntleroy/Vashon/Southworth route with no initial set schedule, according to WSF.

Those who need to travel between Vashon Island and the mainland can also use the Point Defiance/Tahlequah route.

When the crash occurred, the Vashon Island School District, or VISD, alerted parents. The school district was aware of the situation and encouraged all VISD commuter families to look out for more information related to the start of the school year, including updates on ferries throughout the month of August.

Those with monthly or multi-ride vehicle/passenger passes for Vashon and Southworth are being permitted to use them at Seattle’s Colman dock for the remainder of the day, said WSF.

According to The Seattle Times archives, this is not the first incident with the Cathlamet in the ferry’s history.

In April 1982, the Cathlamet drifted from the ferry ramp at Mukilteo, causing the car to slip off. There were no injuries.

In September 1986, the Cathlamet’s propulsion system malfunctioned, and the ferry slammed into the Clinton dock, causing $500,000 in damage.

On June 1, 2007, the Cathlamet slammed into the Mukilteo ferry dock around 6 am, damaging a “dolphin,” which collapsed and blocked the ship. According to The Seattle Times, the captain was fired on July 28 of that year for “grossly negligent actions.”

Fauntleroy ferry damaged in crash – Chopper 7 The Cathlamet ferry crashed into a “dolphin” on Thursday morning, causing damage to cars and significant damage to the ferry. 7-28-22

Well, looks like the MV Cathlamet is out of service for a while 🙃 @wsferries hope the bridge crew is ok after such a sudden, strange crash into one of the dolphins at Fauntleroy! It looked like the passengers in the two crunched cars were okay though pic.twitter.com/ZyEyVJ7qPS