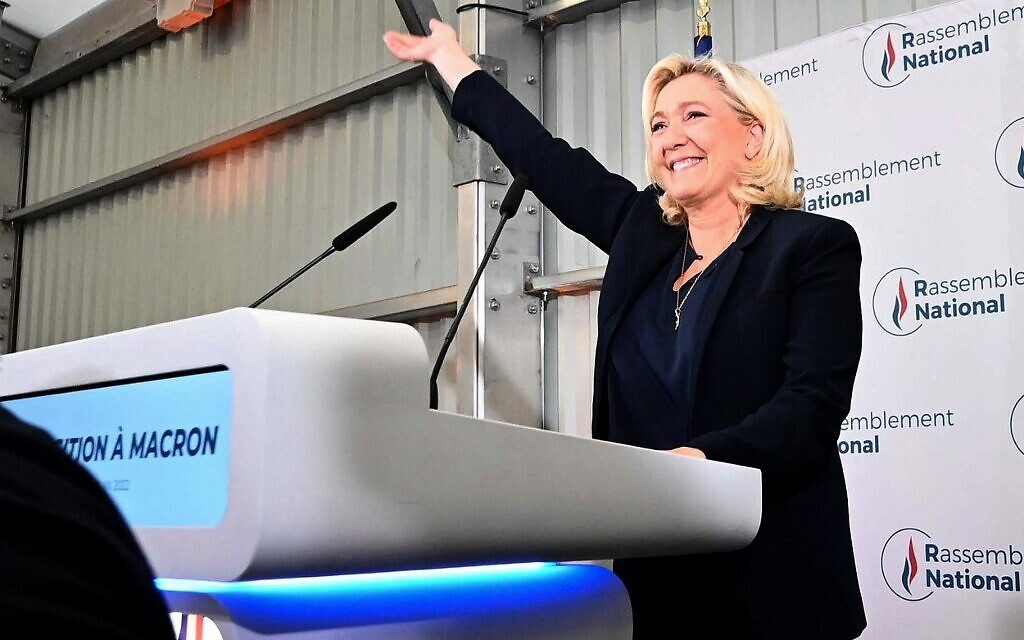 PARIS — French President Emmanuel Macron on Monday lost his parliamentary after major election gains by a newly formed majority left-wing alliance and a surge from the far right, in a stunning blow to his plans for major second-term reform.

The result from Sunday’s second round poll threw French politics into turmoil, raising the prospect of a paralyzed legislature or messy coalitions with Macron forced to reach out to new allies.

Macron, 44, now also risks being distracted by domestic problems as he seeks to play a prominent role in putting an end to Russia’s invasion of Ukraine and as a key statesman in the EU.

Macron’s “Together” coalition will still be the biggest party in the next National Assembly. But with 245 seats, according to full interior ministry results announced in the early hours of Monday, it is well short of the 289 seats needed for a majority in the 577-member chamber.

Far-right leader Marine Le Pen’s National Rally party made huge gains and will send 89 MPs to the new parliament, up from eight in the previous parliament, making it the biggest rightwing force in parliament ahead of the traditional right The Republicans (LR).

Le Pen, who lost to Macron in the presidential election, was re-elected as MP in her stronghold of Hénin-Beaumont, in northern France.

“The Macron adventure has reached its end,” Le Pen said. The group of National Rally lawmakers “will be by far the biggest of the history of our political family.” 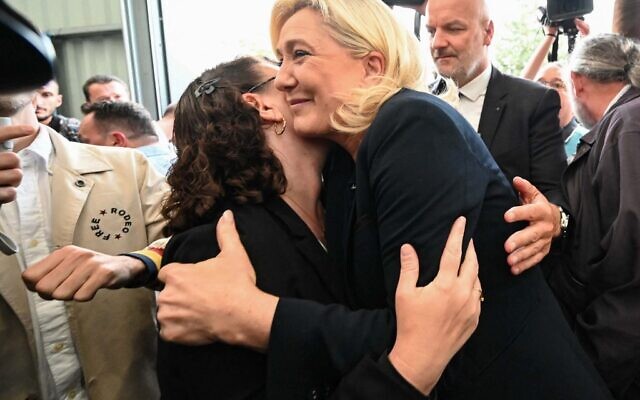 French far-right party Rassemblement National (RN) leader Marine Le Pen embraces a supporter as she arrives to deliver a speech after the first results of the parliamentary elections in Henin-Beaumont, northern France, on June 19, 2022. (Photo by DENIS) CHARLET / AFP)

Acting National Rally president Jordan Bardella compared his party’s showing to a “tsunami.” “Tonight’s message is that the French people made from Emmanuel Macron a minority president,” he said on TF1 television.

Le Pen has for years sought to distance herself from the antisemitic legacy of her political group and her father, with mixed success. In 2017, Le Pen faced criticism for denying that France was responsible for its role in rounding up French Jews for deportation to Nazi death camps.

The National Front has made considerable electoral gains since Le Pen became its leader in 2011, succeeding her father, Jean-Marie Le Pen, a Holocaust revisionist and openly antisemitic nationalist. The party advocates pulling out of the European Union, stopping immigration from Muslim countries and imposing limitations on religious freedoms, as well as harsh punishments for violence and incitement.

Marine Le Pen kicked out her father from the party in 2015 following his conviction for inciting racial hatred against Jews. (He suggested a Jewish singer critical of the party be “put in the oven.”) She has kicked out several party members for antisemitic rhetoric.

The new left-wing coalition NUPES under 70-year-old hard-left figurehead Jean-Luc Melenchon won 135 seats, according to an AFP count based on the results published by the ministry.

The coalition, formed in May after the left splintered for April’s presidential elections, brings together Socialists, the hard left, Communists and greens.

Melenchon called Sunday’s results “above all an electoral failure” for Macron.

“The rout of the presidential party is total and there will be no” in parliament, he told majority cheering supporters in Paris.

A prominent MP from Melenchon’s party, Alexis Corbiere, said the result meant Macron’s plan to raise the French retirement age to 65 had been “sunk.” 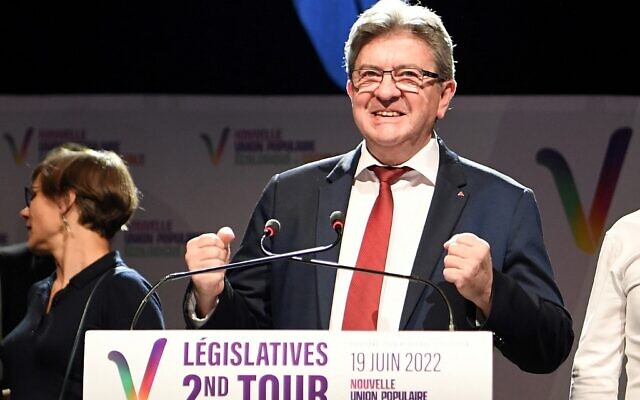 Leader of left-wing coalition NUPES Jean-Luc Melenchon delivers a speech after the first results of the parliamentary elections in Paris, on June 19, 2022. -(Photo by Bertrand GUAY / AFP)

“This situation faced a risk for our country, given the challenges that we have to,” Prime Minister Elisabeth Borne said in a televised statement, vowing: “We will work from tomorrow to build a working majority.”

The outcome severely tarnished Macron’s April presidential election victory when he defeated the far-right to be the first French president to win a second term in over two decades.

“It’s a turning point for his image of invincibility,” said Bruno Cautres, a researcher at the Center for Political Research of Sciences Po.

Le Monde daily headlined on its website: “Macron faces the risk of political paralysis,” while the Le Figaro daily said the results raised the specter of a “stillborn new mandate”.

Macron had hoped to stamp his second term with an ambitious program of tax cuts, welfare reform and raising the retirement age. All that is now in question.

“This will complicate the reforms… It will be much more difficult to govern,” said Dominique Rousseau, professor of law at Paris Pantheon-Sorbonne University.

“The slap,” said the headline in the left-leaning Liberation’s Monday edition, adding the results represented by the “fall” of Macron’s way of governing.

There could now potentially be weeks of political deadlock as the president seeks to reach out to new parties.

The most likely option would be an alliance with the Republicans, the traditional party of the French right, which has 61 MPs.

LR President Christian Jacob made clear there would be no easy partnership, saying his party intended to “stay in opposition however.” 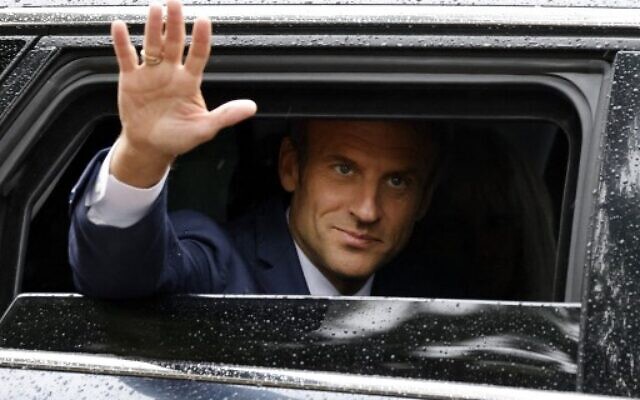 France’s President Emmanuel Macron waves as he leaves after casting his vote in the second stage of French parliamentary elections at a polling station in Le Touquet, northern France on June 19, 2022. (Photo by Ludovic MARIN / AFP)

Economy Minister Bruno Le Maire denied that France would be ungovernable but admitted “a lot of imagination would be needed” from the ruling party in an “unprecedented situation”.

Macron had called on voters to hand his coalition a “solid majority” last week, adding “nothing would be worse than adding French disorder to the world disorder.”

In another blow, key ministers standing for election were set to lose their jobs under a convention that they should resign if they fail to win seats.

Two other close Macron allies, parliament speaker Richard Ferrand and former interior minister Christophe Castaner, both acknowledged in the fight for their seats.

In a rare spot of good news for the president, Europe Minister Clement Beaune and Public Service Minister Stanislas Guerini — both young pillars of his party — won tight battles for their seats.