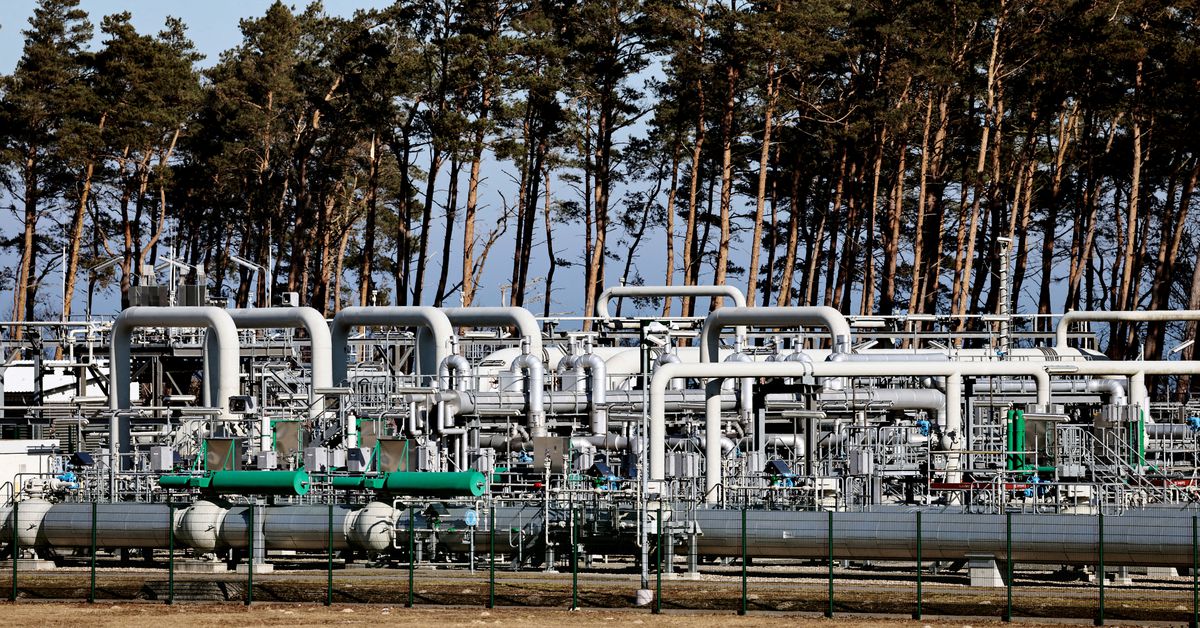 Pipes at the landfall facilities of the ‘Nord Stream 1’ gas pipeline are pictured in Lubmin, Germany, March 8, 2022. REUTERS/Hannibal Hanschke

July 11 (Reuters) – The Nord Stream 1 pipeline that transports gas from Russia to Germany will undergo planned maintenance from Monday, prompting concerns about gas supplies to Europe if the outage is extended. read more

Russian gas flows through Nord Stream 1 have already been cut to 40% of capacity. read more

Ukraine also halted a gas transit route to Europe in May, blaming interference by occupying Russian forces, and several European countries being cut off from Russian gas supply following their non-compliance with a new payment mechanism.

WHAT ARE THE MAIN ROUTES FOR RUSSIAN GAS TO EUROPE?

The Ukraine transit corridor mostly sends gas to Austria, Italy, Slovakia and other east European states. Ukraine has closed the Sokhranovka transit pipeline that runs through Russian-occupied territory in the east of the country.

European countries have been seeking to cut their reliance on Russian gas. Some have already been cut off from Russian supplies after they rejected a Russian demand to pay in rubles.

Others, including Germany, still need Russian gas and are trying to refill depleted gas reserves.

Alternative routes to Europe that do not go via Ukraine include the Yamal-Europe pipeline, which crosses Belarus and Poland to Germany, and Nord Stream 1, which runs under the Baltic Sea to Germany.

The Yamal-Europe pipeline has a 33 billion cubic meter (bcm) capacity, around the sixth of Russian gas exports to Europe. Gas has been flowing eastward through the pipeline from Germany to Poland since the start of this year.

Moscow has placed sanctions on the owner of the Polish part of the Yamal-Europe pipeline that carries Russian gas to Europe. However, Poland can manage without reverse gas flow on the Yamal pipeline, its climate minister has said.

Austria, Germany, Italy, Slovakia and the Czech Republic have been receiving lower volumes through Nord Stream 1.

The Kremlin has said the reduced supplies through Nord Stream 1 were not premeditated, blaming Western sanctions for a delay in the return of equipment sent for maintenance to Canada.

WHERE ELSE CAN EUROPE GET GAS?

Some countries have alternative supply options and Europe’s gas network is linked up so supplies can be shared, although the global gas market was tight even before the Ukraine crisis.

Germany, Europe’s biggest consumer of Russian gas that has halted certification of the new Nord Stream 2 gas pipeline from Russia because of the Ukraine war, could import gas from Britain, Denmark, Norway and the Netherlands via pipelines.

Norway, Europe’s second biggest exporter behind Russia, has been pushing up production to help the European Union towards its target of ending reliance on Russian fossil fuels by 2027.

Britain’s Centrica (CNA.L) has signed a deal with Norway’s Equinor (EQNR.OL) for extra gas supplies to the United Kingdom for the next three winters. Britain does not rely on Russian gas and can also export to Europe via pipelines.

Southern Europe can receive Azeri gas via the Trans Adriatic Pipeline to Italy and the Trans-Anatolian Natural Gas Pipeline (TANAP) through Turkey.

The United States has said it can supply 15 bcm of liquefied natural gas (LNG) to the European Union this year. read more

US LNG plants are producing at full capacity and a blast last month at a major LNG export terminal in Texas will keep it idle until September and it will operate only partially from then until the end of 2022.

Europe’s LNG terminals also have limited capacity for extra imports, although some European countries say they are seeking ways to expand imports and storage.

Germany is among the countries that wants to build new LNG terminals. It plans to build two in just two years.

Poland, which meets about 50% of its gas consumption with Russian gas or around 10 bcm, has said it can source gas via two links with Germany.

In October, a pipeline allowing up to 10 bcm of gas per year to flow between Poland and Norway will be opened.

ARE THERE OTHER OPTIONS TO COPE WITH A GAS SUPPLY CRUNCH?

Several nations could seek to fill any gap in energy supplies by turning to electricity imports via interconnectors from their neighbors or by boosting power generation from nuclear, renewables, hydropower or coal.

Nuclear availability is falling in Belgium, Britain, France and Germany with plants facing outages as they age, are decommissioned or phased out.

Europe has been trying to shift from coal to meet climate targets but some coal plants have been switched back on since mid-2021 because of surging gas prices. read more

Germany has triggered stage two of three of its emergency gas plan and Economy Minister Robert Habeck warned his country was heading for a gas shortage if Russian supplies remained as low as now, and some industries would have to close come winter.

The Dutch energy minister has said its Groningen field could be called upon to help neighboring countries in the event of a complete cut-off in Russian supplies but ramping up production would risk causing earthquakes. read more