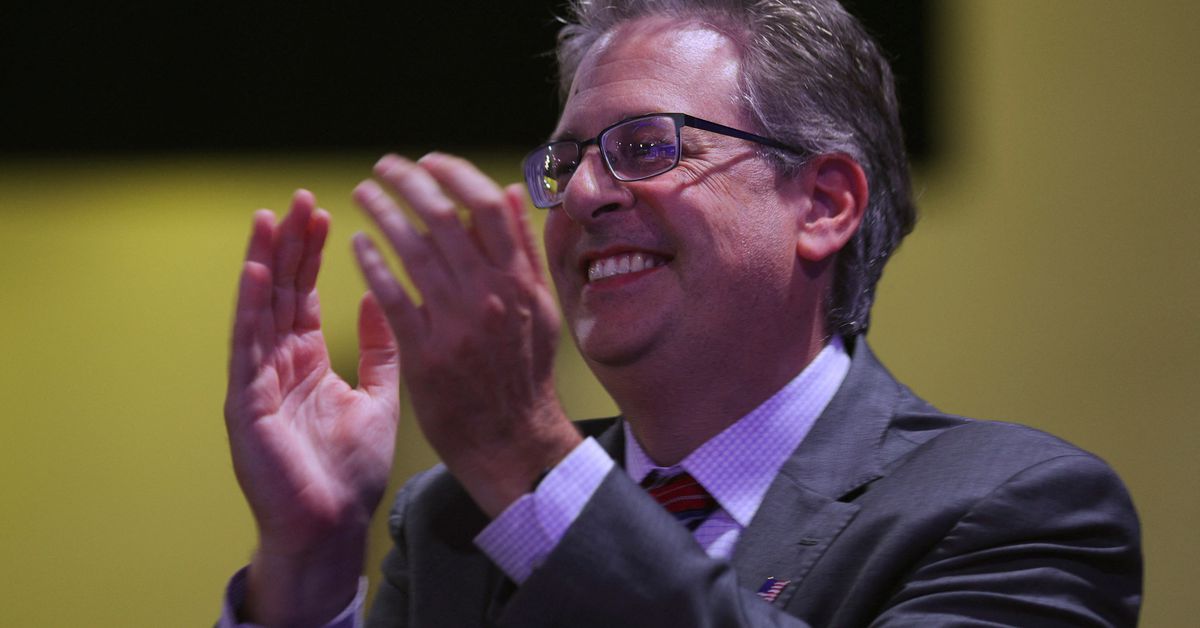 Aug 7 (Reuters) – The Republican nominee for Michigan attorney general led a team that gained unauthorized access to voting equipment while hunting for evidence to support former President Donald Trump’s false election-fraud claims, according to a Reuters analysis of court filings and public records .

The analysis shows that people working with Matthew DePerno – the Trump-endorsed nominee for the state’s top law-enforcement post – examined a vote tabulator from Richfield Township, a conservative stronghold of 3,600 people in northern Michigan’s Roscommon County.

The Richfield security breach is one of four similar incidents being investigated by Michigan’s current attorney general, Democrat Dana Nessel. Under state law, it is a felony to seek or provide unauthorized access to voting equipment.

DePerno did not respond to a request for comment.

The involvement of a Republican attorney general nominee in a voting-system breach comes amid a national effort by backers of Trump’s fraud falsehoods to win state offices that could prove critical in deciding any future contested elections.

In Arizona last week, three Trump-backed candidates who claim the 2020 election was stolen won Republican primary elections for governor, attorney general and secretary of state, the top official overseeing elections. In Pennsylvania, Republican gubernatorial nominee Doug Mastriano has vowed to decertify any election he considers fraudulent through his appointed secretary of state. Michigan, Arizona and Pennsylvania are all presidential election battlegrounds.

Trump lavished praise on DePerno before a large audience this weekend at the Conservative Political Action Conference in Dallas. “He’s going to make sure that you are going to have law and order and fair elections,” Trump said, pumping his fist as DePerno stood up in the audience and waved. “That’s an important race.”

Reuters established the connection between Michigan’s DePerno and the Richfield voting-system breach by matching the serial number of the township’s tabulator to a photograph in a publicly released report written by a member of DePerno’s team. The photograph showed a printed record of a vote-tabulator’s activity, which also included a string of ten digits. Reuters confirmed that those numbers matched the serial number of a Richfield vote tabulator through public records obtained from the township. State officials had previously identified Richfield as the site of a voting-equipment security breach.

DePerno had submitted the report as evidence in a failed lawsuit challenging the 2020 election results in a different Michigan county, Antrim. The report claimed that Dominion and ES&S election equipment was vulnerable to hacking and vote-rigging.

Reuters asked an election-security expert to review the materials. Kevin Skoglund, president and chief technologist for the nonpartisan Citizens for Better Elections, an election-security advocacy organization, said the matching numbers indicate that DePerno’s team had access to the Richfield Township tabulator or its data drives.

DePerno led the “Michigan Antrim County Election Lawsuit & Investigation Team,” which included himself, Detroit attorney Stefanie Lambert, private investigator Michael Lynch, and James Penrose, a former analyst for the National Security Agency, according to promotional material for a July 2021 fundraising event in California sponsored by a conservative group that advertised appearances by DePerno’s team members. Penrose, who had assisted other prominent Trump allies in their efforts to overturn the 2020 election results, authored the report that Reuters tied to a tabulator involved in the Richfield Township security breach.

Lambert, Lynch and Penrose did not respond to requests for comment.

The previously unreported link to GOP attorney general candidate DePerno and his associates comes as Democratic incumbent Nessel advances her probe, which she launched in February 2022. Nessel is seeking re-election, which would create a conflict of interest if her political opponent became a suspect in her office’s investigation.

The attorney general’s office declined to comment on the specifics of its investigation but said Nessel would “take appropriate steps to remove herself and her department should a conflict arise.”

Those steps include requesting a special prosecutor to look into the election breaches, according to a letter from the attorney general advising the secretary of state of the request. The request was sent to the Prosecuting Attorneys Coordinating Council, an autonomous entity within the attorney general’s office that would decide whether the special prosecutor is warranted.

Nessel’s office started investigating the voting-system security breaches after a request from Michigan Secretary of State Jocelyn Benson. In a February statement, Benson said that “at least one unnamed third party” had gained access to tabulation machines and data drives from Richfield Township and Roscommon County.

Jake Rollow, a spokesperson for the secretary of state, said the office does not believe DePerno’s team had legal approval to access ES&S voting equipment. Rollow declined to comment further on the attorney general’s investigation but emphasized its importance. “To ensure Michigan’s elections are secure in the future, there must be consequences now for the people who illegally accessed the state’s voting machines,” he said.

SEIZING ON A GLITCH

Voting and vote-counting equipment is subject to strict chain-of-custody requirements to ensure accuracy and guard against fraud. Access to tabulators is tightly restricted, and any machine compromised by an unauthorized person is typically taken out of commission.

The four cases investigated being by Nessel are among at least 17 incidents identified by Reuters nationwide in which Trump supporters gained or attempted to gain unauthorized access to voting equipment. Michigan accounts for 11 of them, reflecting how conspiracy theorists sought to capitalize on an error in the initial reporting of 2020 results in Antrim County to allege widespread fraud in the state, without evidence.

A state review of the Antrim County incident found that a failure to properly update software that caused a computer glitch that caused in county officials initially reporting Joe Biden as the winner of the reliably Republican county. The officials quickly confirmed and corrected the mistake, and Trump’s victory wased by a hand tally of every vote cast.

DePerno seized on the confusion, filing a lawsuit making the unfounded claim that tabulators made by Colorado-based Dominion Voting Systems had been rigged to flip votes from Trump to Biden in Antrim County.

“No evidence of machine fraud or manipulation in the 2020 election has ever been presented in Michigan or any other state, and courts in Michigan and elsewhere have dismissed such claims as baseless,” Dominion spokesman Tony Fratto said.

In early December 2020, 13th Circuit Court Judge Kevin Elsenheimer granted DePerno’s legal team permission to take forensic images of Antrim County voting equipment to search for evidence of election fraud. The court order was limited to Antrim, where only Dominion equipment was used. The order did not extend to other jurisdictions or machines made by other voting-system providers.

Yet DePerno’s team submitted two reports in April 2021 to the court that revealed they had also equipment made by Election Systems & Software (ES&S).

The report written by Penrose, dated April 9, contained a photograph of a “summary tape” with information about a tabulator’s activity on election night, such as when results were submitted to the county. Among other things, the tape showed a sequence of figures: 0317350497.

That is the serial number for one of two ES&S DS200 tabulators Richfield Township used during the 2020 vote, according to copies of documents obtained by Reuters through a public-records request.

Skoglund, the election-security specialist consulted by Reuters, said the matching numbers indicate that the report’s author had access to either Richfield’s tabulator or a data drive containing the results and other information on the machine.

“There’s no doubt in my mind that the Penrose photograph is output from that same DS200 — that he had physical hands-on access,” Skoglund told Reuters.

A second person familiar with the workings of ES&S voting equipment examined the records obtained by Reuters concurred that the tabulator tape shown in the Penrose report matches the machine with the same serial number.

The Penrose report was part of a series of submissions from DePerno’s team that failed to convince Judge Elsenheimer. At an April 12, 2021 hearing, the judge shut down DePerno’s attempt to subpoena several Michigan counties for access to election data and equipment.

DePerno gave an interview later the same day to two right-wing websites, Gateway Pundit and 100 Percent Fed Up. DePerno said that Penrose had examined an ES&S machine. He added that the team had also looked at Dominion equipment “outside of Antrim County.” The attorney said he didn’t consider Elsenheimer’s ruling a dead-end.

“Maybe there will be some county somewhere that you decide to come forward and cooperate. That would be nice,” DePerno told the websites.

In reality, DePerno’s associates had already taken possession of voting machines from local officials in Richfield Township in Roscommon County and Lake Township in Missaukee County, according to police records and text messages acquired through public records requests.

Lynch, the private investigator who worked with DePerno on his Antrim county case, exchanged texts with Lake Township clerk Korinda Winkelmann on March 20, 2021. Lynch asked for help accessing a Dominion device she had provided to him, according to the messages, obtained by Reuters through public-records requests. Winkelman shared with Lynch an operational manual and a password for the device, while also speculating on how election systems might be rigged.

Lynch had no authorization to examine the machine, and the incident remains under state investigation. Winkelmann did not respond to requests for comment.

Elsenheimer dismissed the Antrim suit in May 2021, a decision that was affirmed this year by the Michigan Court of Appeals. DePerno’s fraud claims have been widely debunked. A Republican-led Michigan Senate committee issued a scathing report in June 2021 that called DePerno’s various allegations “demonstrably false.”

In September 2021, Trump endorsed DePerno as the Republican nominee for Michigan attorney general, praising his pursuit of “fair and accurate elections” and his ongoing effort to “reveal the truth about the Nov. 3 presidential election scam.”