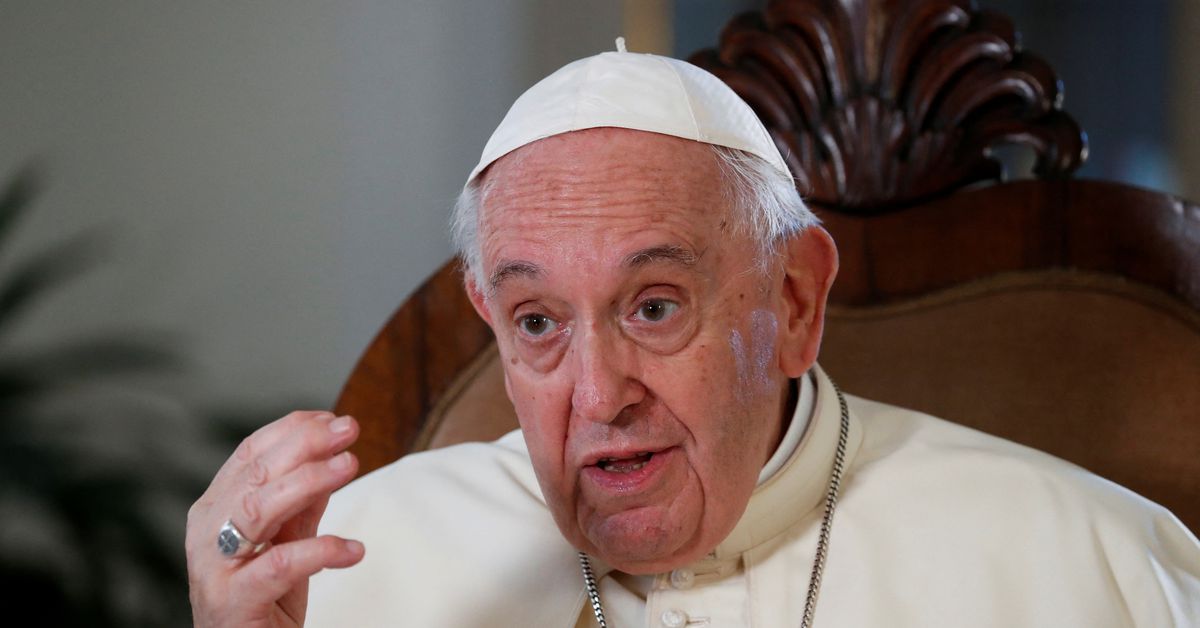 VATICAN CITY, July 4 (Reuters) – Pope Francis has dismissed reports that he plans to resign in the near future, saying he is on track to visit Canada this month and hopes to be able to go to Moscow and Kyiv as soon as possible after that.

In an exclusive interview in his Vatican residence, Francis also denied rumors that he had cancer, joking that his doctors “didn’t tell me anything about it”, and for the first time gave details of the knee condition that has prevented him carrying out add duties.

In a 90-minute conversation on Saturday afternoon, conducted in Italian, with no aids present, the 85-year-old pontiff also repeated his condemnation of abortion following the US Supreme Court ruling last month.

Rumors have swirled in the media that a conjunction of events in late August, including meetings with the world’s cardinals to discuss a new Vatican constitution, a ceremony to induct new cardinals, and a visit to the Italian city of L’Aquila, could foreshadow a resignation announcement.

L’Aquila is associated with Pope Celestine V, who resigned the papacy in 1294. Pope Benedict XVI visited the city four years before he resigned in 2013, the first pope to do so in about 600 years.

But Francis, alert and at throughout the interview as he discussed a wide range of international and Church issues, laughed the idea off.

“All these coincidences made some think that the same ‘liturgy’ would happen,” he said. “But it never entered my mind. For the moment no, for the moment, no. Really!”

Francis did, however, repeat his often stated position that he might resign someday if failing health made it impossible for him to run the Church – something that had been almost unthinkable before Benedict XVI.

Asked when he thought that might be, he said: “We don’t know. God will say.”

The interview took place on the day he was to have left for Democratic Republic of Congo and South Sudan, a trip he had to cancel because doctors said he might also have to miss a trip to Canada from July 24-30 unless he agreed to have 20 more days of therapy and rest for his right knee. read more

He said the decision to cancel the Africa trip had caused him “much suffering”, particularly because he wanted to promote peace in both countries. read more

Francis used a cane as he walked into a reception room on the ground floor of the Santa Marta guest house where he has lived since his election in 2013, eschewing the papal apartment in the Apostolic Palace used by his predecessors.

The room has a copy of one of Francis’ favorite paintings: “Mary, Untier of Knots”, created around 1700 by the German Joachim Schmidtner.

Asked how he was, the pope joked: “I’m still alive!”

He gave details of his ailment for the first time in public, saying he had suffered “a small fracture” in the knee when he took a misstep while a ligament was inflamed.

“I am well, I am slowly getting better,” he said, adding that the fracture was knitting, helped by laser and magnet therapy.

Pope Francis speaks during an exclusive interview with Reuters, at the Vatican, July 2, 2022. REUTERS/Remo Casilli

Francis also dismissed towardsurs that a cancer found a year ago when he had been performed a six-hour operation to remove part of his colon because of diverticulitis, a common condition in the elderly.

“It (the operation) was a great success,” he said, adding with a laugh that “they didn’t tell me anything” about the supposed cancer, which he dismissed as “court gossip”.

But he said he did not want an operation on his knee because the general anesthetic in last year’s surgery had had negative side-effects.

Speaking of the situation in Ukraine, Francis noted that there have been contacts between Vatican Secretary of State Cardinal Pietro Parolin and Russian Foreign Minister Sergei Lavrov about a possible trip to Moscow.

The initial signs were not good. No pope has ever visited Moscow, and Francis has repeatedly condemned Russia’s invasion of Ukraine; last Thursday he implicitly accused it of waging a “cruel and senseless war of”. read more

When the Vatican first asked about a trip several months ago, Francis said Moscow replied that it was not the right time.

But he hinted that something may now have changed.

“I would like to go (to Ukraine), and I wanted to go to Moscow first. We exchanged messages about this because I thought that if the Russian president gave me a small window to serve the cause of peace…

“And now it is possible, after I come back from Canada, it is possible that I manage to go to Ukraine,” he said. “The first thing is to go to Russia to try to help in some way, but I would like to go to both capitals.”

Asked about the US Supreme Court’s ruling overturning the landmark Roe v. Wade ruling establishing a woman’s right to have an abortion, Francis said he respected the decision but did not have enough information to speak about it from a legal point of view. read more

But he strongly condemned abortion, comparing it to “hiring a hit man”. The Catholic Church teaches that life begins at the moment of conception.

“I ask: Is it legitimate, is it right, to eliminate a human life to solve a problem?”

Francis was asked about a debate in the United States over whether a Catholic politician who is personally opposed to abortion but supports others’ right to choose should be allowed to receive the sacrament of communion.

House of Representatives speaker Nancy Pelosi, for example, has been barred by the conservative archbishop of her home diocese of San Francisco from receiving it there, but is regularly given communion at a parish in Washington, DC Last week, she received the sacrament at a Papal Mass in the Vatican. read more