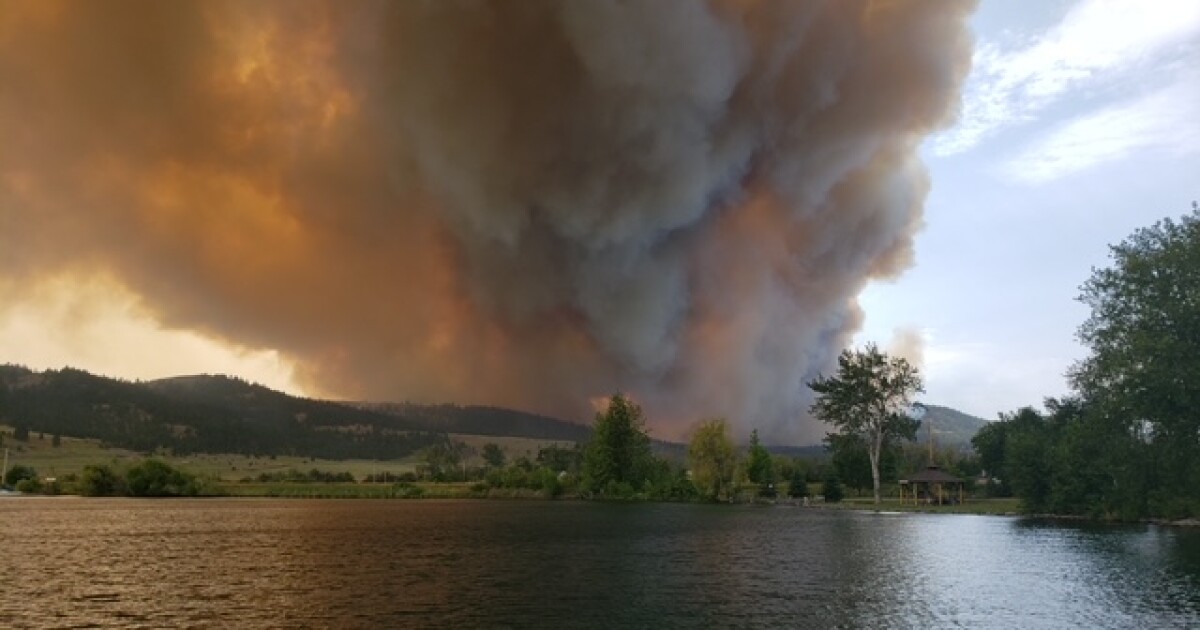 “The fire has turned and is running hard.”

The fire, which started Friday evening and has burned thousands of acres north of Highway 28 between Elmo and Hot Springs, forced dozens more to evacuate Monday, destroyed one structure, and shut down a portion of Highway 93.

The evacuation notices include the Lake Mary Ronan corridor and Chief Cliff Estates near Black Lake Road. That area was in the most danger, according to Bell.

“The houses in the fire line, where the fire is running, those folks are all evacuated,” he said.

Emergency shelters for evacuees have been established at Polson High School and Somers Middle School. You can call 800-272-6668 to request their services.

But it’s not just evacuations. The smoke from the fast-moving Elmo Fire forced officials to close the section of Highway 93 between Elmo and Dayton. Bell was urging drivers to use Highway 35 on the eastern side of Flathead Lake instead.

“This afternoon we had some winds come out of the west pushing the fire east and northeast from what we saw yesterday, and along with those winds we were unable to have our aircraft up at that time so it just sort of created this perfect culmination for some pretty active fire.”

Fire crews are attacking the fire’s edge, Rouse said, utilizing aircraft as the number of personnel working the fire continues to grow.

“Yesterday evening we had 293 people,” she said. “Again, there are more resources rolling in throughout the day so that number will climb up tomorrow morning.”

On Monday night, a lightning holdover in the Mission Mountains started a new fire.

CT Camel with CSKT Division of Fire told MTN the Red Horn Fire is high in the Missions. While the fire is visible from St. Ignatius, it’s about an acre in size and not threatening any structures.

Camel, however, had a message for the public.

“We want people to be safe out there and make sure they’re safe with their outdoors and recreation,” he said. “We’re in very high fire danger. Very close to extreme. We’d like people to be careful.”

The Montana Department of Transportation reports Highway 93 is closed from Elmo to Dayton due to fire activity in the area.

It’s unknown how long the road closure will be in place.

The Team is working with the Montana Department of Transportation on the use of pilot cars on Highway 93 between Elmo to Rollins due to poor visibility.

The fire has turned and is running hard, according to Lake County Sheriff Don Bell.

The new Monday afternoon evacuations include the Lake Mary Ronan area – about 30 to 40 homes.

Sheriff Bell tells MTN News Chief Cliff Estates is the most in danger – about eight homes in the area have been evacuated.

Lake County Sheriff Don Bell confirms they have Lake Mary Ronan Road closed and are doing more evacuation to the NE of the fire.

Residents in this area are strongly encouraged to evacuate.

He says the Elmo fire switched direction and is now burning very fast to the east.

The Montana Department of Transportation reports travelers can expect intermittent blockage until further notice between mile marker 77 and mile marker 81 on US Highway 93 near Dayton.

MDT says no parking is allowed along the highway for fire viewing. The roadway needs to remain open for emergency vehicles.

ELMO- Evacuations have been ordered for areas near the Elmo wildfire Monday afternoon.

Evacuations have been ordered for Black Lake Road to US Highway 93.

The Elmo fire blew up Monday afternoon moving to the east.

The Elmo Fire has grown to nearly 13,000 acres as it burns in the Elmo area. It sparked late Friday night.

Officials say the cause of the fire is under investigation.

This is a developing story. Stay with KPAX for updates.