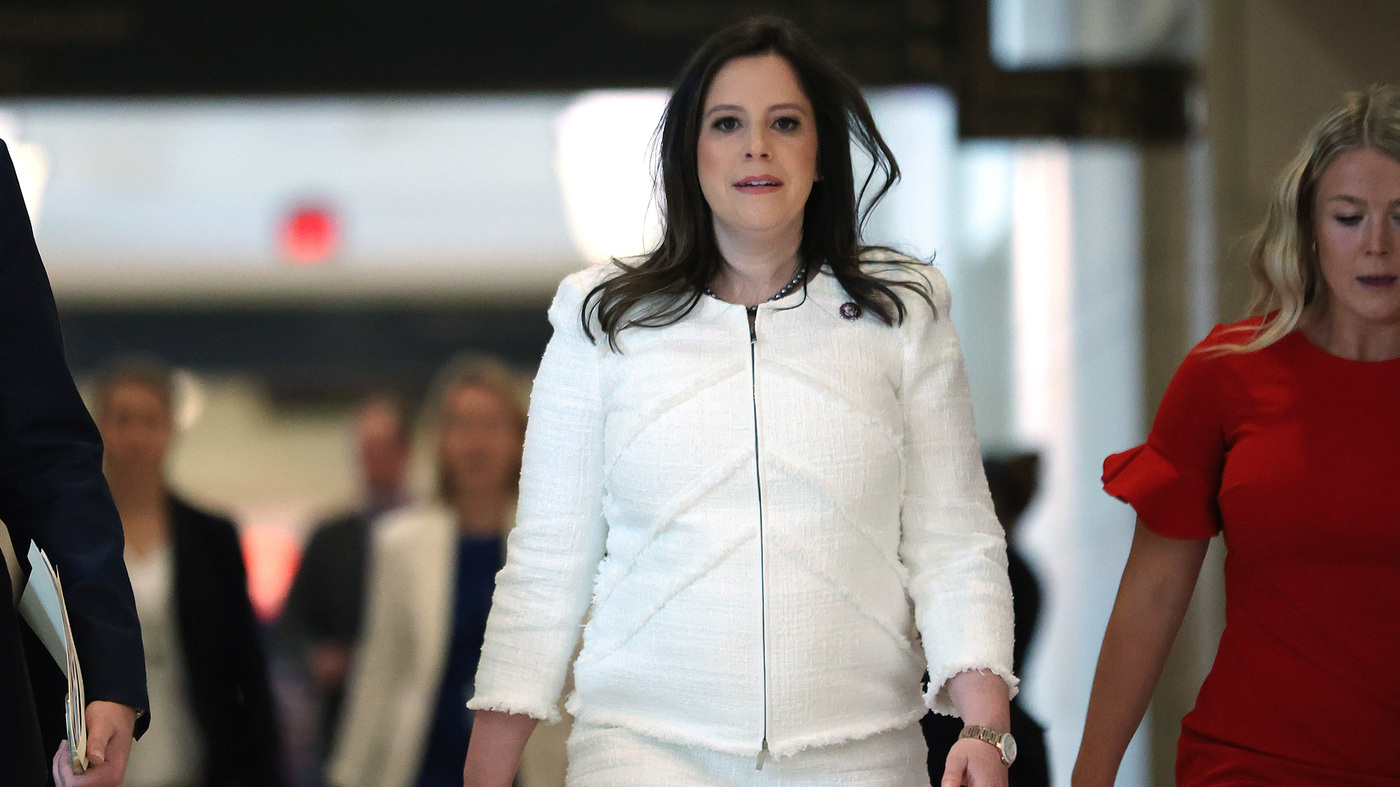 Rep. Elise Stefanik, RN.Y., leaves a meeting where she was elected House Republican Conference chair on May 14, 2021. Stefanik replaced Rep. Liz Cheney, who voted to impeach former President Trump. Stefanik’s loyalty to Trump has roiled a pro-democracy group where she serves on the board.

Rep. Elise Stefanik, RN.Y., leaves a meeting where she was elected House Republican Conference chair on May 14, 2021. Stefanik replaced Rep. Liz Cheney, who voted to impeach former President Trump. Stefanik’s loyalty to Trump has roiled a pro-democracy group where she serves on the board.

“I am honored to present you with the 2021 Democracy Award,” Stefanik said, as the room applauded a group called Nicaragua Não Más.

The event was organized by the National Endowment for Democracy, a congressionally funded pro-democracy group where Stefanik serves on the board of directors.

In her speech, Stefanik talked about Nicaragua’s “consolidation into dictatorship” and the importance of “promoting and strengthening democracy around the world.”

But when it comes to domestic politics, the No. 3 House Republican strikes a different tone.

She voted to overturn the results of the 2020 presidential election. In the weeks before the Endowment’s award ceremony, her campaign published a controversial Facebook ad making an unfounded accusation: that “Radical Democrats” are colluding with immigrants to stage “a PERMANENT ELECTION INSURRECTION.”

This month, she’s been one of Donald Trump’s most vocal defenders – and one of the House Jan. 6 committee’s biggest critics. “We want to make sure that every American knows that this is not a serious investigation. This is a partisan political witch hunt,” Stefanik said in an interview with the conservative outlet Newsmax.

In her defense of Trump, Stefanik regularly spreads election conspiracy theories – some of the same ideas that motivated a violent mob to storm the US Capitol. Her statements and actions have prompted some of the Endowment’s staff to demand her removal from her leadership role. But when her position on the board expired in 2022, she was renewed for another term.

When she won her first term, at age 30, Stefanik was the youngest woman ever elected to Congress. She was known as a principled hard worker – and somebody who worked with Democrats on all kinds of issues. By one index, she was ranked the 13th most bipartisan member of Congress.

Stefanik also spent much of her career working with organizations that defend democratic and civic institutions, including the Foreign Policy Initiative and Harvard’s Institute of Politics.

The National Endowment for Democracy embodies all the values ​​the United States traditionally stands for. Congress appropriates the money, and the Endowment writes grants to help activists and civil society groups in countries with autocratic leaders.

But after Stefanik was chosen for the board in early 2019, her politics changed. Now, some people who work at the Endowment say that she is undermining their mission from her and harming their work from the inside.

Stefanik has never explicitly said that the election was stolen or rigged – her rhetoric is more polished than Trump’s – but she amplifies much of the same mis- and disinformation as the former president.

Election experts say 2020 was the most carefully watched election in American history. Both Republican and Democratic officials across the country oversaw it and never found any evidence of widespread fraud or irregularities.

Stefanik condemned the violence on Jan. 6. But after police had cleared the rioters from the Capitol grounds, she voted against certifying President Biden’s win in Pennsylvania.

Staff were angry about Stefanik’s actions around Jan. 6

At the National Endowment for Democracy, a lot of people on staff were livid about Stefanik’s Jan. 6 vote. One former staffer told NPR that the Endowment’s values ​​were “totally undermined and mocked” by its own board member.

More than 60 people signed an internal letter describing Stefanik’s actions as “upsetting in the extreme.”

“Nothing could be more incompatible with the democratic values ​​which are enshrined in the Endowment and its sacred mission,” the letter read. “It is our desire to know how it could be possible that Representative Stefanik will remain part of the NED board of directors following her abuse of her office in ways that contradict NED’s core values ​​in the starkest terms, and what steps will be taken to resolve this contradiction.”

An image of the letter staff sent to the National Endowment for Democracy’s leadership on Jan. 7, 2021. It was addressed to Andrew Card and Carl Gershman, who are no longer at the organization.

The leadership has kept Stefanik on their board

The letter was the focus of some heated staff meetings.

The organization put out a statement about Jan. 6, saying that the Endowment is “appalled by the violent and seditious assault” on the Capitol. But they decided not to remove Stefanik.

The Endowment declined to do an interview for this story. But NPR spoke with people who were part of the staff discussions at the Endowment after Jan. 6. They didn’t want to give their names because they weren’t authorized to speak to the media and feared they could lose their jobs or face career backlash for doing so.

The staff was told that the Endowment is bipartisan and that it cannot get dragged into domestic politics, the sources said. The organization’s funding has come under threat in the past – most recently during the Trump administration – but it’s had consistent backing from both Republicans and Democrats in Congress, and the leadership wants to keep it that way.

The leadership also argued that Stefanik is supportive of the Endowment’s work abroad and is critically ally in Congress, staffers.

Then conversations about Stefanik died down. Her role on the board of directors did not change.

Some staffers told NPR they hoped the Endowment would quietly let Stefanik go, or put some distance between the organization and the congresswoman. Instead, Stefanik spoke at the 2021 award ceremony. And when her position on the board expired in January of this year, she was renewed for another term.

Meanwhile, Harvard’s Institute of Politics did remove Stefanik from an advisory role after Jan. 6. Stefanik accused the university of “bowing to the woke, far-left mob.”

NPR reached out to Stefanik for this story, but her office did not respond to our request.

However, a spokesperson did comment on a related story in Politico, which first reported on the internal turmoil at the Endowment over Stefanik’s role last year.

The spokesperson told Politico that Stefanik was “proud to have one of the strongest records in the House supporting and leading bipartisan efforts to fund the National Endowment of Democracy and the mission of supporting and strengthening democratic institutions around the world.”

The current and former staffers interviewed for this story argued that the Endowment’s decision not to remove Stefanik was hypocritical. “She participated in an attempt to overturn an election. It’s hard to think of anything more fundamental to the issues we care about,” one person said.

Another source said it’s “embarrassing” that Stefanik is on the board because the Endowment “is supposed to be a leader in this fight for democracy.”

“This was something that transcended partisanship,” a third person said.

A lot of the staffers were sympathetic to the leadership’s point that the Endowment’s funding has been at risk in the past and could easily be jeopardized again if the organization is perceived as choosing sides in political battles.

“We have seen a vindictiveness in some quarters of the Republican Party aimed at efforts to hold them accountable for what one might call counter-democratic actions,” the third source said. “It’s not something to be dismissed out of hand.”

But they wanted more transparency on the decision to embrace Stefanik, they said, and wanted to know how the Endowment would react to attacks on American democracy in the future.

For years, Larry Diamond was co-editor of the Endowment’s Journal of Democracy. In a farewell piece earlier this year, Diamond wrote about the “deterioration of democratic norms and institutions in the United States” and around the world. “This is the darkest moment for freedom in half a century,” he wrote.

Still, he suggested that firing Stefanik would have been a careless move for the organization. “How does that serve democracy or the great work we’re doing around the world to help democrats in desperate need, who need funding for their civil society organizations, funding for independent media, funding and training to resist authoritarian rule?” Diamond told NPR.

He added that in this moment of intense polarization, it’s crucial to have “protected spaces where partisan politics is not going to intrude. And I think it’s important that the National Endowment for Democracy be one of those institutions.”

But as Republican Party leaders increasingly embrace extreme views – like the false notion that the 2020 election was stolen – it may become more difficult for traditionally bipartisan groups to stay out of the fray.

“These are tough issues and I think we’re all trying to figure out, is bipartisanship possible these days?” said Charles Stewart III, the professor of political science at MIT.

“We could be longing for the day when the biggest worry we would have been with a Stefanik on the National Endowment of Democracy board,” Stewart said.

Stefanik is one of 30 board members, and it appears the Endowment believes bipartisanship is still possible. They’ve indicated that they want to include politicians of all stripes as they make decisions and write grants – even someone who votes to overturn an election.