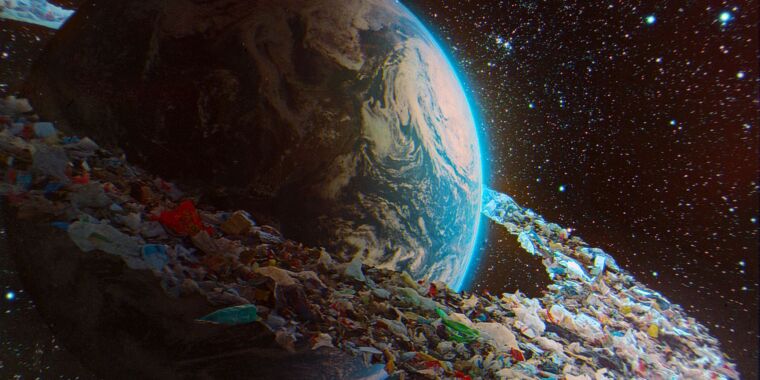 One of the greatest threats to humanity’s ongoing expansion into space is the proliferation of debris in low Earth orbit. During a panel discussion at the Ars Frontiers conference earlier this month, a trio of experts described the problem and outlined potential solutions.

The issue of debris is almost as old as spaceflight, explained Caleb Henry, a senior analyst at Quilty Analytics. During the Space Race in the 1960s, the Soviet Union and the United States often launched rockets without regard for the trajectory of the upper stages.

“When you put things in space, they don’t just disappear, same as with most trash,” Henry said. “Trash that’s in space is not biodegradable. The result is that we have of thousands of large pieces of debris 10 centimeters or above. And then depending on who you ask, there are millions of pieces that are below 10 centimeters in size, a lot of it being in low Earth orbit.”

In recent years, however, nations have become more responsible about the management of their upper stages. So instead of just letting them fly after a launch, fuel is reserved to de-orbit them into Earth’s atmosphere or put them into orbits far from the Earth-Moon system. But the issue of debris has moved beyond spent rocket stages.

A second factor in the creation of space debris is the hundreds to thousands of pieces of debris created by anti-satellite tests. Russia, the United States, China, and India have all conducted ground-to-space missile tests to demonstrate their ability to shoot down the satellites of other nations. Recently, after a flagrant Russian demonstration in November that threatened the International Space Station, the United States vowed to end such tests and encourage other nations to follow suit.

On top of this backdrop of existing debris, there is a new problem. With the rise of broadband Internet from low-Earth orbit—from the existing Starlink and OneWeb constellations and the forthcoming plans from Amazon, Telesat, and other companies—the number of satellites in already crowded orbits is projected to grow by an order of magnitude or more, said Therese Jones, senior director of policy at the Satellite Industry Association.

“We have tens, if not hundreds, of thousands of satellites being launched over the next decade or so.” Jones said. “For reference, right now there are around 5,000 satellites in orbit. So [there will be] an exponential explosion in the number of satellites. And the vast majority of them want to be in a 400 to 600 kilometer range above Earth. So that area is becoming increasingly congested.”

A major challenge of managing the existing debris, and the coming challenge of increasingly congested orbits, is that each nation has its own regulatory environment, and there is little international coordination.

“It’s not just the technical obstacles of removing debris,” said Dave Hebert, vice president of global marketing communications at Astroscale. “There are policy and economic challenges as well. Who’s responsible? Who pays? How much do they pay? How are we going to hold people accountable?”

Nominally, the regulation of space debris falls under the United Nations Committee on the Peaceful Uses of Outer Space. But because this is a consensus-based organization, if Russia, China, or the United States does not agree, nothing happens.

All that exists now are non-binding guidelines focused on long-term sustainability, Jones said. She applauded the Biden Administration for taking a stand on anti-satellite tests and called on the US government to take other steps.

“I think the work really has to be done by the US government on bilateral and multilateral basis, on the coordination and management piece, with like-minded countries to get anywhere,” she said. “And once we start getting other countries to sign up, then it becomes a normal behavior in space that then Russia and China are implicitly bound to, even if they don’t sign off. So I think that’s where we need to go.”