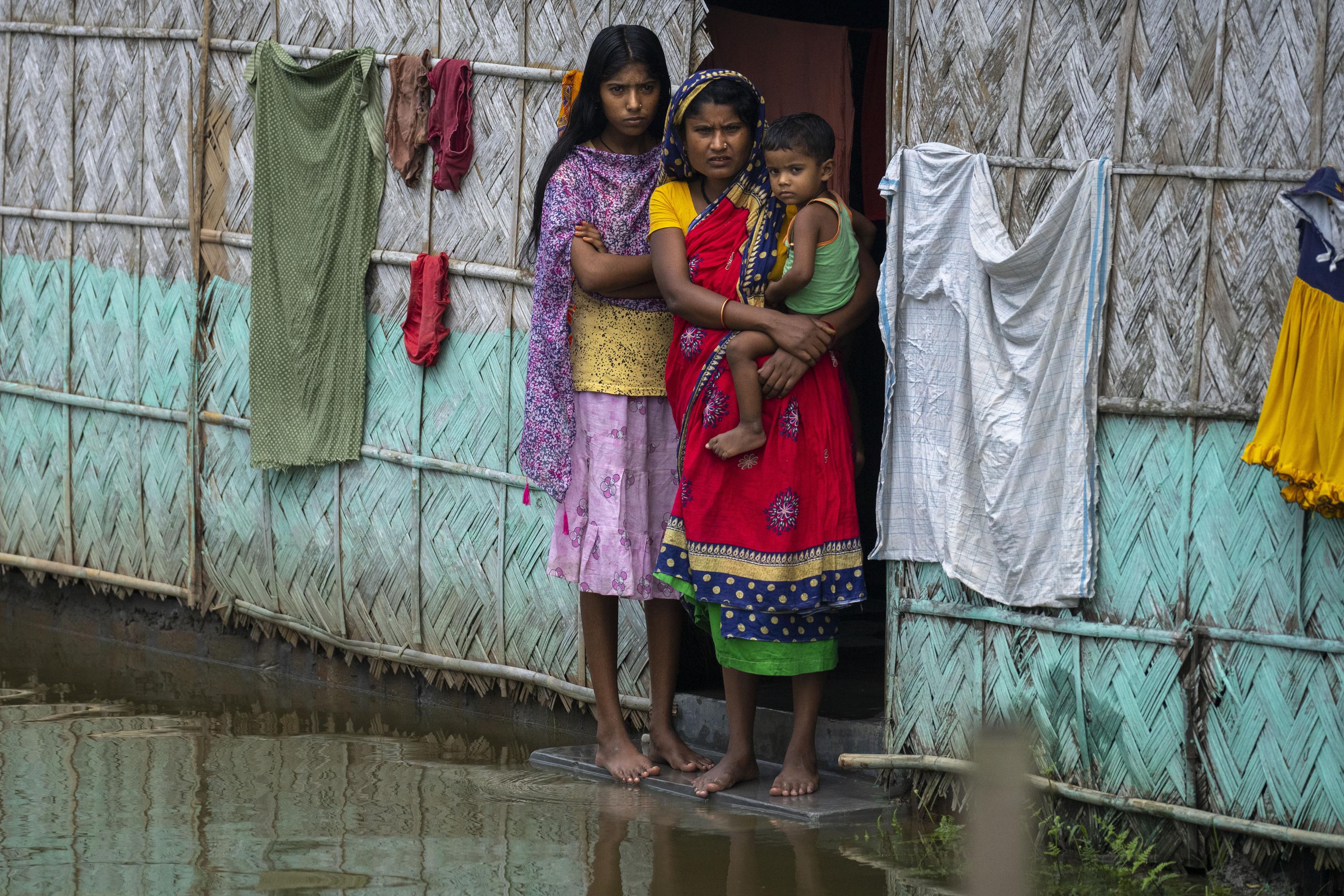 SYLHET, Bangladesh (AP) — Villagers in northeastern Bangladesh makeshift refugee centers and scrambled to meet boats arriving with food and fresh water as massive floods, which have killed dozens of people and displaced hundreds of thousands there and in neighboring India, continued to wreak havoc Tuesday.

In Sylhet, one of the worst-hit areas in the extreme northeast of the country near the border with India, villagers waded, swam and paddled makeshift rafts or small skiffs to a boat delivering aid that had moored to one shelter, its ground floor covered half way to the ceiling with water.

The low-lying village along the Surma River is prone to flooding, but with extreme rainfall at the start of this year’s monsoon season, villager Mehedi Hasan Parvez said he’s never seen anything this bad.

“In some cases even the second story of buildings has been inundated,” the local businessman said, sitting in a small boat as he waited for his turn to receive a package of rice, canned goods and other staples.

“Some people have been without water at home for three days,” he said. “They have no food at home and can’t get to the market to buy supplies.”

Monsoon rains in South Asia typically begin in June. But this year heavy downpours lashed northeastern India and Bangladesh as early as March, triggering floods as early as April in Bangladesh.

With rising global temperatures due to climate change, experts say the monsoon is becoming more variable, meaning that much of the rain that would typically fall in a season is arriving in a shorter period.

Meghalaya, the mountainous region of India to the north of Sylhet, and neighboring Assam state, renowned for its tea plantations, have seen far more rain in June than usual.

In the settlements of Mawsynram and Cherrapunji, some of the world’s wettest areas on the southern fringes of Meghalaya state that overlook Bangladesh’s plains, more than 970 millimeters (38 inches) of rain was recorded on Sunday alone, according to India’s Meteorological Department.

Meghalaya has already received 174% of its total average June rainfall over the first three weeks of the month. Assam is at 97% of its average for the month over the same period.

Bangladesh Prime Minister Sheikh Hasina surveyed many of the flooded areas by helicopter on Tuesday and urged regional leaders to speed up relief efforts at a meeting with them.

So far, reports of fatalities in Bangladesh range between 12 and 32, but the UN children’s agency said about 4 million people have been cut off by the floods in the country’s northeast and are in urgent need of help.

UNICEF said in a report Monday that they include 1.6 million children and that without fresh drinking water, they could be in serious danger of waterborne diseases.

In the Sylhet region, 90% of health facilities have been flooded and thousands of people have taken refuge in overcrowded shelters, the agency said.

At one makeshift shelter, a village woman shared a small room with more than a half dozen others and two of her family’s cattle, saying she had been left with little choice.

“My house has been destroyed by the floodwaters,” said the woman, who identified herself only as Jainabunnesa.

On the other side of the mountain range to the north of Sylhet in India’s Assam state, the torrential rains felt the Brahmaputra River spilling over its banks in many areas, causing destruction and triggering massive landslides.

Assam authorities reported 10 more flood deaths on Tuesday, bringing its total to 64, with 17 others killed in landslides.

The National Disaster Response Force and the Indian Army have evacuated thousands of people in the last week from the roofs of their houses with inflatable boats. They fear some people are still missing.

The Brahmaputra River flows from northern Bangladesh on its way to the Bay of Bengal, and Bangladesh’s Flood Forecast and Warning Center India warned Tuesday of dangerously high waters for the next five days.