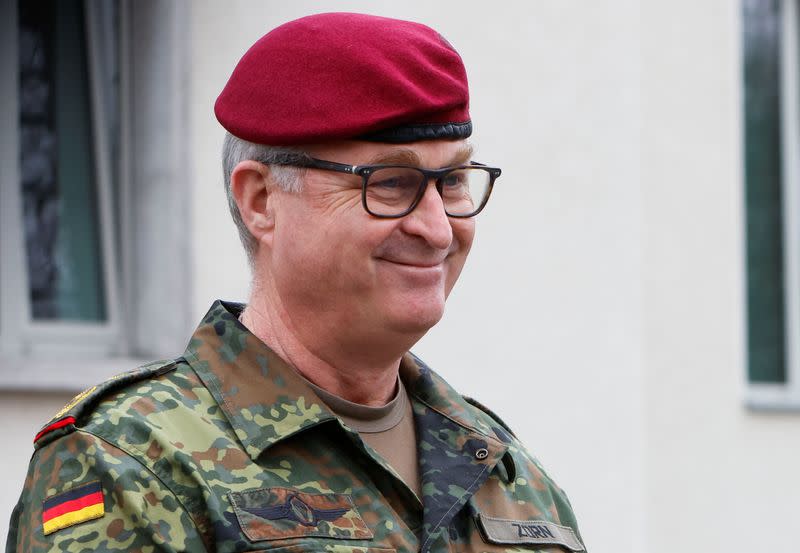 By Sabine Siebold and Sarah Marsh

BERLIN (Reuters) – Germany’s chief of defense has warned that the West must not underestimate Moscow’s military strength, saying Russia has the scope to open up a second front should it choose to do so.

Beyond the army, Russia also has a navy and air force at its disposal, he added.

“Most of the Russian navy has not yet been deployed in the war on Ukraine, and the Russian air force still has significant potential as well, which poses a threat to NATO too,” Zorn said.

The Bundeswehr regularly supports NATO air policing missions over the Baltic states with fighter jets and, having one of the strongest fleets in the region, is also keeping a close eye on the developments in the Baltic Sea at its doorstep.

One potential hotspot there is Kaliningrad, a Russian exclave sandwiched between NATO members Poland and Lithuania, which hosts Russia’s Baltic naval fleet and is a deployment location for Russian nuclear-capable Iskander missiles.

Russia has threatened to nuclear station and hypersonic weapons in Kaliningrad should Finland and Sweden join NATO as they are in the process of doing.

Zorn, speaking before the start of an Ukrainian offensive in the south, stressed that Russia continued to have substantial reserves.

“As concerns its military, Russia is very well capable of expanding the conflict regionally,” the general said. “That this would be a very unreasonable thing for Russia to do is a different story.”

Referring to the military situation in Ukraine, Zorn said the dynamic of Russia’s attack had slowed down but Russia was still pressing steadily ahead.

“Supported by massive artillery fire, they are driving their advance forward – regardless of civilian Ukrainian casualties,” he said.

He also suggested that Russia was not about to run out of ammunition any time soon.

“The Russians have enormous quantities of ammunition at their disposal,” he said. “This ammunition is partly old and very inaccurate but it is exactly this that causes great destruction to civilian infrastructure. They fire around 40,000 to 60,000 rounds of artillery ammunition per day.”

Zorn said he nevertheless did not anticipate any far reaching offensives deep into Ukrainian territory at the moment.

He also said Russian forces were currently focused on conquering the Donbas, the industrial region of eastern Ukraine where Moscow-backed separatists already hold chunks of territory. No military resolution was in sight yet, however, he said.