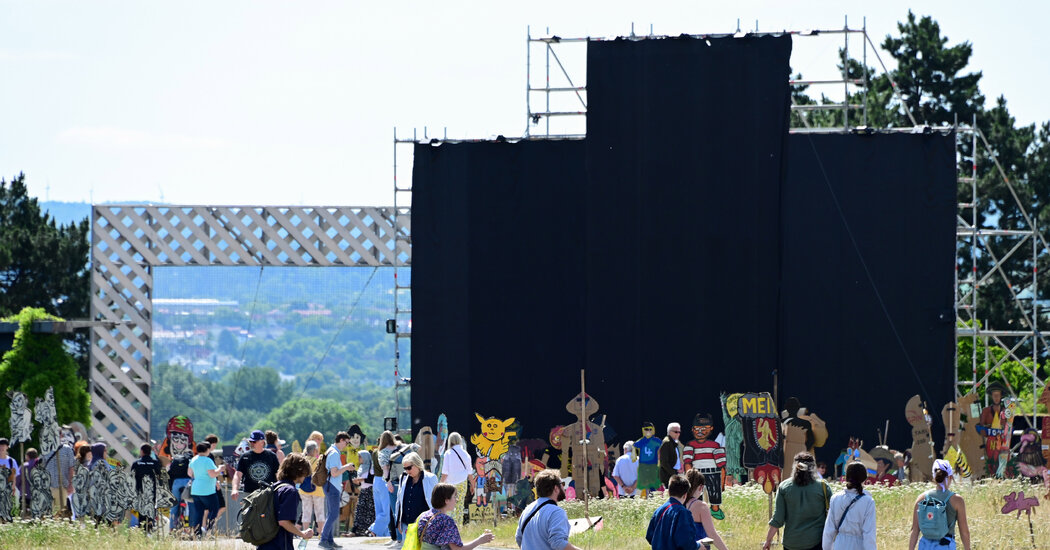 Even before Documenta opened on Saturday in Kassel, Germany, the renowned contemporary art exhibition had roiled with controversy over the inclusion of artists who had criticized Israel. Now, just four days into the 100-day show, which runs through Sept. 16, its organizers said on Tuesday that they would remove a work that “triggers antisemitic readings” after an outcry from lawmakers and diplomats.

That piece, a nearly 60-foot-long painted banner called “People’s Justice,” was created by the Indonesian collective Taring Padi in 2002, when its members included activists who had struggled under Indonesia’s military dictatorship. The banner’s busy, cartoonlike depiction of political resistance involves hundreds of individual figures.

Two of those figures stirred outrage on Monday, after photographs of them circulated on social media. One was a man with side-locks and fangs, wearing a hat emblazoned with a Nazi emblem. The other was a soldier with a pig’s head, wearing a Star of David neckerchief and a helmet with “Mossad,” the name of Israel’s security service, written on it. (Other figures in the work were identified as members of intelligence forces including the British agency MI5 and the KGB)

Israel’s embassy in Germany said in a series of tweets that Documenta was promoting “Goebbels-style propaganda” — a reference to the Nazis’ chief propagandist. Claudia Roth, Germany’s culture minister, said in a statement posted to social media“In my view, this is antisemitic imagery.”

“This is where artistic freedom finds its limits,” she added. Within hours of those comments, Documenta had covered the work with sheets of black fabric.

Taring Padi said in a news release issued by Documenta’s organizers on Monday that the work was “not meant to be related in any way to antisemitism” and it was “saddened that details in this banner are understood differently from its original purpose.” The work was a comment on the “militarism and violence” Indonesians experienced during the 32-year dictatorship of Suharto, which ended in 1998, the collective said. “We apologize for the hurt caused,” Taring Padi added. “There is no record in our work that aims to portray any ethnic groups in a negative way.”

But Documenta’s decision to conceal “People’s Justice” failed to draw a line under the controversy, which swirled throughout Tuesday in social media, on radio and television. The exhibition’s supervisory board, which includes Kassel’s mayor, Christian Geselle, met and decided to remove the artwork, according to a late-afternoon news release from city authorities.

Held every five years, Documenta is widely considered as one of the art world’s most important events, only rivaled by the Venice Biennale. This year’s edition, the 15th, is curated by ruangrupa, another Indonesian art collective. Ruangrupa invited 14 other artist collectives to take part; those groups then invited further collectives to join in. Most of the participating artists are from the Global South, with few participants from Europe and the United States.

In January, a protest group called the Alliance Against Antisemitism Kassel called ruangrupa of supporting the Israel boycott, and also queried the inclusion in the exhibition of a Palestinian art collective The Question of Funding, who the alliance said were also boycott sympathizers. Soon, German newspaper columnists and politicians picked up those concerns.

In May, Felix Klein, the official in Germany’s government in charge of combating antisemitism, criticized the lack of Israeli artists in the Documenta lineup. The same month, intruders sprayed graffiti in the exhibition space that was scheduled to host The Question of Funding’s work.

By the exhibition’s preview days last week, when journalists and art-world insiders take a look at the show, the debate about antisemitism seemed to have receded. But the issue raised its head again at the event’s opening ceremony on Saturday, when President Frank-Walter Steinmeier of Germany mentioned it repeatedly in a speech. “I want to be frank: I wasn’t sure in the past few weeks whether I would be here with you today,” he said. Artistic freedom was at the heart of Germany’s constitution, he added, and criticism of Israel’s government was allowed. But, he added, it was “striking that no Jewish artists from Israel are represented at this important exhibition of contemporary art.”

Steinmeier did not mention “People’s Justice,” which had only been installed on Friday, the final day of the Documenta preview. Yet just two days later it was at the center of the debate.

The pressure on Documenta’s organizers is unlikely to end with the work’s removal. Charlotte Knobloch, the former president of the Central Council of Jews in Germany, said in a telephone interview on Tuesday that “antisemitism was not taken seriously as a problem in the run-up to the event,” and more action was also needed at the exhibition. Sabine Schormann, Documenta’s director general, should resign, Knobloch said, and the wider organization should undertake some “soul searching.”

Documenta’s organizers, ruangrupa and Taring Padi said through a spokeswoman that they were not immediately available for comment.

On Tuesday, Roth, Germany’s culture minister, said in a statement that the painting’s removal was “just the first step,” adding that there must be “further consequences: It must be clarified how it was possible for this mural with antisemitic images to be installed there.”

Documenta’s organizers and curators should “immediately check” that there were no other antisemitic images in any other works on display, Roth added. “The protection of human dignity, the protection against antisemitism, against racism and any form of inhumanity is the basis of our coexistence,” she said.