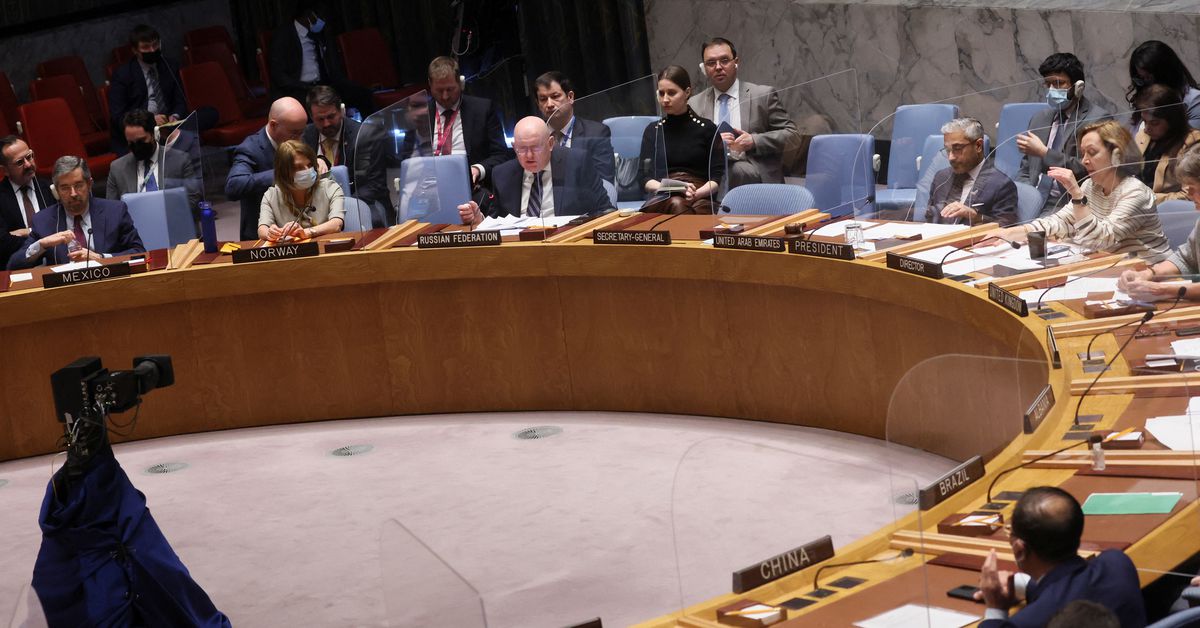 UNITED NATIONS, March 22 (Reuters) – Russia is seeking to blunt Western-led efforts at the United Nations to further isolate Moscow for invading Ukraine, with the Security Council and General Assembly gearing up to vote this week on competing measures on Ukraine’s humanitarian crisis .

A diplomatic tit-for-tat has been escalating at the world body since Russia launched what it calls a “special military operation” on Feb. 24 to destroy Ukraine’s military infrastructure.

The 193-member UN General Assembly is faced with rival draft resolutions – both demanding aid access and the protection of civilians, medical personnel, and aid workers in Ukraine. But only one text, written by Ukraine and its allies and due to be voted on this week, criticizes Russia’s role in creating the crisis.

The second draft from South Africa makes no mention of Russia and it was not immediately clear when it could face a vote. In remarks Reuters accompanying its proposal, argued matters seen by South Africa, it remains crucial to find consensus on humanitarian issues. Diverting the focus on other will lead to divisions and a failure to get agreement on outcomes.”

Britain’s UN Ambassador Barbara Woodward told reporters on Tuesday that discussions were underway with South Africa on how “we can come to a text that would command widespread support across the General Assembly without having to have two votes.”

Ukraine and its allies are looking to improve on the 141 yes cast to adopt a March 2 General Assembly resolution that deplored Russia’s “aggression” against Ukraine and demanded it withdraw. Russia, Belarus, Eritrea, North Korea and Syria voted no, while 35 states – including China – abstained. read more

“We’re still hoping to get the same numbers that isolated Russia the last time around,” US Ambassador to the United Nations, Linda Thomas-Greenfield, told reporters on Tuesday.

Amid the competing draft resolutions, UN spokesman Stephane Dujarric stressed on Tuesday that what would be most useful would be unity: “This organization is at its strongest when it speaks with one voice.”

Russia has asked the Security Council to vote on its draft proposal on Wednesday, but diplomats say it is set to fail, with most of the body likely to abstain because it makes no reference to Russia’s role.

“It is absolutely unconscionable for Russia to think that they can put forward a humanitarian resolution,” said Thomas-Greenfield, describing it as “like the arsonist calling for the neighbors to help him put out the fire that he started.”