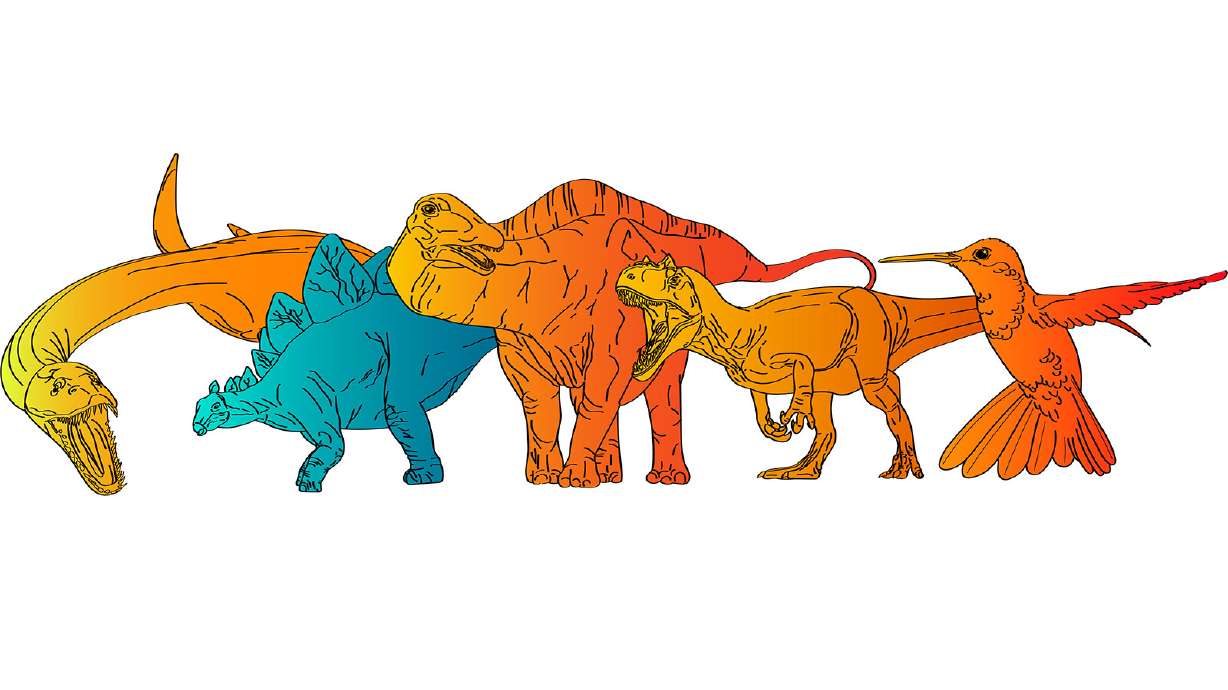 ATLANTA — Fearsome predators like T. rex and towering, telescope-necked dinosaurs, such as brachiosaurus, were warm-blooded creatures in the same way birds and mammals are, according to a groundbreaking new study.

The question of whether the blood that coursed through dinosaurs’ giant frames ran warm or cold, like that of reptiles, is a long-standing one that has vexed paleontologists. Knowing that fundamental piece of information could illuminate the lives of the prehistoric creatures in significant ways.

Warm-blooded animals have a high metabolic rate — they take in lots of oxygen and need many calories to maintain their body temperature, while cold-blooded animals breathe and eat less.

“This is really exciting for us as paleontologists — the question of whether dinosaurs were warm- or cold-blooded is one of the oldest questions in paleontology, and now we think we have a consensus, that most dinosaurs were warm-blooded,” said lead study author Jasmina Wiemann, a postdoctoral researcher at the California Institute of Technology, in a news release.

Previous recent attempts to answer this question have suggested that dinosaurs were warm-blooded, but those findings, which involved analyzing growth rings or chemical isotope signals in bones, were ambiguous because fossilization may change these markers. Plus, those analysis techniques damage fossils, making it harder to build up a large data set.

Wiemann and her colleagues, however, came up with a new—and in their view, more definitive—method to assess a dinosaur’s metabolism.

The researchers looked at the waste products that form when oxygen is inhaled into the body and reacts with proteins, sugars and lipids. The abundance of these waste molecules, which appear as dark-colored patches in fossils, scales in accordance with the amount of oxygen taken in and is an indicator of whether an animal is warm- or cold-blooded.

The molecules are also extremely stable and don’t dissolve in water, which means they are preserved during the fossilization process.

Wiemann and her team analyzed a femur — thigh bone — of 55 different creatures, including 30 extinct and 25 modern animals. Among the samples were bones belonging to dinosaurs, giant flying reptiles called pterosaurs, marine reptiles like the plesiosaurs, and modern birds, mammals and lizards.

The scientists used an approach called infrared spectroscopy, which targets the interactions between molecules and light. This technique allowed them to quantify the number of waste molecules in the fossils. The team then compared those findings with the known metabolic rates of the modern animals and used that data to infer the metabolic rates of the extinct creatures.

Earlier generations of paleontologists had grouped dinosaurs with reptiles, leading to an assumption of a reptilian appearance and lifestyle. Today, most paleontologists agree that dinosaurs were a lot more birdlike after the discovery in the 1990s of feathered fossils, which led to the understanding modern birds are directly descended from dinosaurs.

“With our new evidence for an ancestral avian-level metabolism to all dinosaurs and pterosaurs, all hot-blooded dinosaurs likely had high body temperatures, comparable to those of modern birds,” Wiemann said via email.

However, there were notable exceptions. Dinosaurs classified as ornithischians — an order characterized by hip lizardlikes that includes instantly recognizable creatures such as triceratops and stegosaurus — evolved to have low metabolic rates comparable to those of cold-blooded modern animals.

“Lizards and turtles sit in the sun and bask, and we may have to consider similar ‘behavioral’ thermoregulation in ornithischians with exceptionally low metabolic rates. Cold-blooded dinosaurs also might have had to migrate to warmer climates during the cold season, and climate may have been a selective factor for where some of these dinosaurs could live,” Wieman said.

Having a high metabolic rate has been proposed as one reason why birds survived the mass extinction that wiped out dinosaurs 66 million years ago. However, Wiemann said this study indicated that this was not true: Many dinosaurs with birdlike, exceptional metabolic capacities went extinct.

The research will “drastically change” how the biology and behavior of many extinct animals are interpreted, said Jingmai O’Connor, an associate curator of fossil reptiles at Chicago’s Field Museum. She wasn’t involved in the study.

“I consider these results to be pretty definitive. Wiemann’s methods are meticulous and have been thoroughly tested,” she said.

“Some dinosaurs were warm-blooded, this was the ancestral state, but others secondarily evolved to be ectothermic (cold-blooded). The next question to ask is why and what does this mean about their behavior, ecology, and evolution?”