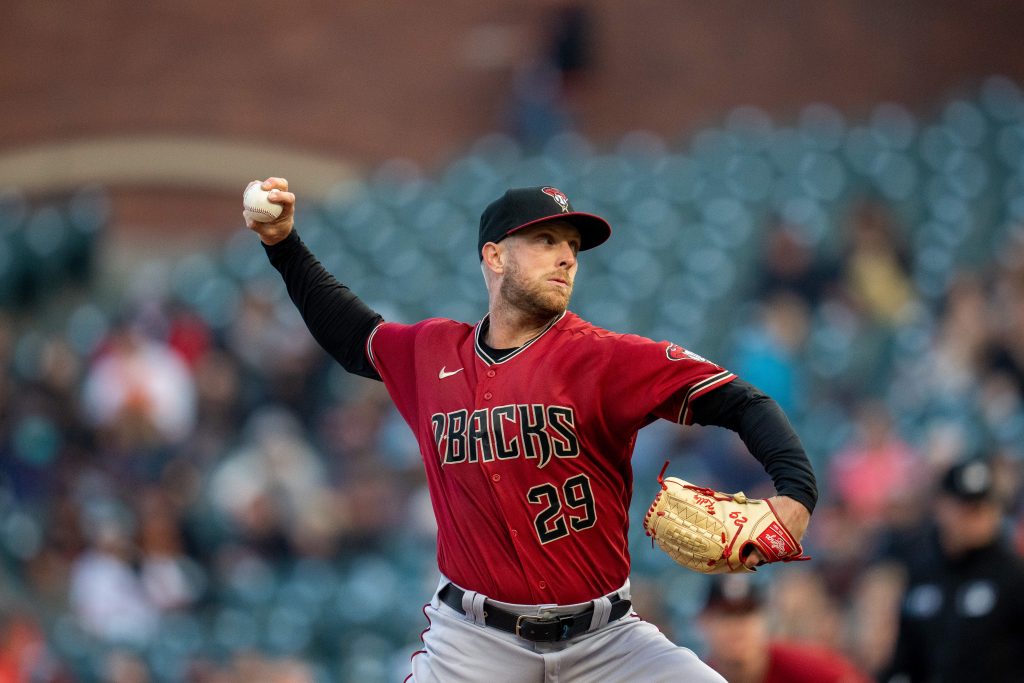 The Diamondbacks announced Friday that they’ve signed right-hander Merrill Kelly to a two-year contract extension, covering the 2023-24 seasons. There’s a club option for the 2025 season as well. ESPN’s Jeff Passan reports that Kelly will be guaranteed $18MM in new money on the contract. Nick Piecoro of the Arizona Republic adds that the right-hander will receive a $1MM signing bonus and earn $8MM in each of the 2023 and 2024 seasons. The 2025 club option is valued at $7MM and comes with a $1MM buyout. Kelly is represented by Apex Baseball.

The new contract for Kelly ought to put any trade speculation to rest for the foreseeable future. Kelly was an oft-mentioned trade candidate prior to the 2021 deadline given his solid production for a noncontending D-backs club and a contract that, prior to today’s announcement, only ran through the 2022 season. Instead, he’ll join recently extended Ketel Marte as a consistent presence for a D-backs team that clearly has no plans to tear down or take a step back despite last year’s poor showing and a stacked division.

Kelly, 33, had been slated to earn $5.25MM this season before reaching free agency for the first time next winter. That $5.25MM salary was locked in after Arizona picked up a club option on Kelly, who originally joined the D-backs on a two-year, $5.5MM deal with a pair of options after a strong run pitching in the Korea Baseball Organization.

Prior to signing in Arizona, Kelly had never thrown a pitch in the Majors. An eighth-round pick of the Rays back in 2010, Kelly never got a look in the Majors with Tampa Bay before being lured to the KBO after a strong run in the upper minors. He spent the 2015-18 seasons pitching for the KBO’s SK Wyverns — now the SSG Landers — where he logged a 3.86 ERA with a 20.6% strikeout rate and a 6.6% walk rate.

That showing was enough to entice the D-backs to bring him back stateside on a guaranteed multi-year deal, and Kelly has rewarded the D-backs with three years of solid performance to date. In 427 2/3 innings, he’s posted at 4.27 ERA with a 20.2% strikeout rate, a 6.6% walk rate and a 43.1% grounder rate. Kelly made 32 starts in his first big league season and another 27 last year. His 2020 campaign was cut short by thoracic outlet surgery, but he was the rare pitcher who immediately bounced back from TOS to produce quality results the following season.

Given the solid nature of Kelly’s work since that big league debut, it’s a rather risk-averse decision to take a reasonably priced extension with free agency just a few months away. That said, given his recent injury and the fact that he did not cash in on his first Major League deal until his age-30 season, it’s quite understandable that he’d opt for the security of a new deal right now. The $18MM in new guarantees will more than double his career earnings, after all. And, in putting pen to paper on this deal, he’ll further establish himself as an aspirational benchmark for little-known players who sign overseas in hopes of eventually cashing in upon a return to the North American ball.

With Kelly now locked into a steady back-of-the-rotation spot, he’ll be counted on alongside Madison Bumgarner, Zac Gallen and Luke Weaver to round out the starting staff both this year and into future seasons. Veteran right-hander Zach Daviessigned to a one-year deal in March, non-roster righty Dan Straily (another KBO returnee), lefty Tyler Gilbert and prospect Corbin Martin are among the other options for the Diamondbacks as they look to rebound from last year’s woeful 52-110 showing.