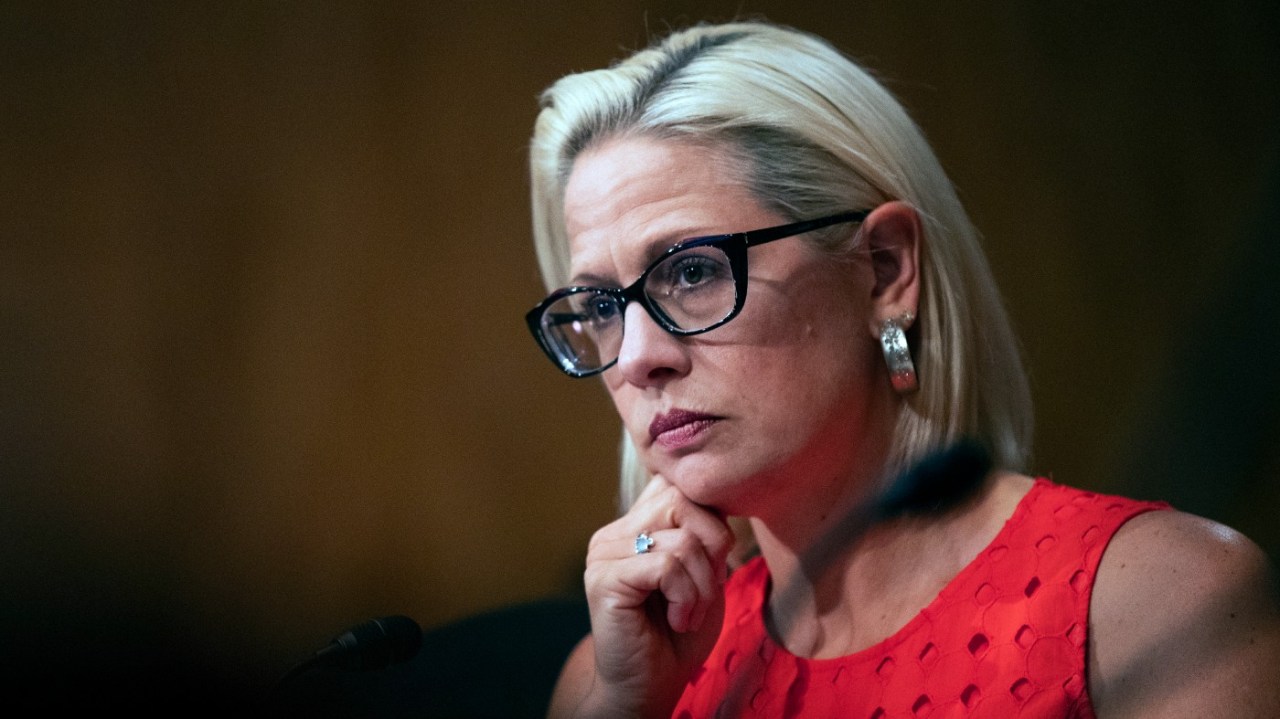 Sinema was left out of the last-stage negotiations between Manchin and Schumer, although she played a large role in crafting the prescription drug reform bill that will be included in a budget reconciliation package along with the tax and climate provisions.

The Arizona senator, who played a central role in crafting the bipartisan infrastructure bill that became law last year as well as the recently passed gun safety legislation, declined to answer questions as she left the Capitol Thursday.

Sinema has already expressed her support for setting a 15 percent corporate minimum tax for companies that earn more than $1 billion in profits, a centerpiece of the deal that would raise $313 billion.

But the bigger question is whether she’ll agree to close the interest tax loophole that allows asset managers to pay only a 20 percent capital gains tax rate on income earned from managing profitable investments. Closing it would raise an estimated $14 billion over 10 years.

Sinema last year opposed doing away with the carried interest tax loophole, and critics were quick to point out how much money in campaign contributions she accepts from people in the private equity industry.

Carried interest language was taken out of a House-passed tax and climate bill last year to avoid provoking a “no” vote from Sinema.

The over how Sinema will vote mystery deepened Thursday when she didn’t attend a special Senate Democratic Caucus meeting where Schumer explained the deal.

A Democratic senator who attended the session noted that it is not unusual for Sinema to miss caucus meetings.

A spokeswoman for Sinema said she’s reviewing the text and will need to see what comes out of the parliamentarian process.

Sinema remained silent as the reporters peppered her with questions while she walked to her car on the East Front of the Capitol. The last shouted question she heard before she closed the door of her vehicle was: “Are you going to sink the bill?”

Sinema has already left her mark on the bill by saying early during last year’s negotiations that she would not support raising marginal tax rates for individuals or raising the corporate tax rate above its current level of 21 percent.

In an effort to appease Sinema, the White House instead proposed a 5 percent gross income surcharge tax on adjusted income more than $10 million, affecting only the 0.02 percent wealthiest Americans.

Schumer appears confident he will have Sinema’s vote for the tax and climate bill, which would raise an estimated $124 billion in new revenue from beefing up IRS enforcement of tax compliance and IRS taxpayer services and operations.

“This Senate Democratic majority will ensure we close tax loopholes and make the wealthiest corporations and individuals pay their fair share,” he announced on the Senate floor Thursday afternoon. “Many in Washington have promised to address these challenges but where previous efforts have fallen short, Senate Democrats and this majority will move swiftly to deliver to the American people.”

When asked about Sinema, Schumer only told reporters that she’s reviewing the bill.

Closing the carried interest loophole has been a priority for some Democrats for more than a decade, but the issue has divided the party.

Since then, sentiment in the Democratic caucus has shifted overwhelmingly in favor of closing the loophole.

“Frankly, a lot of Wall Street has come around to the view that if there were any justification” for taxing the income of asset managers at the capital gains rate, “it’s long gone,” said Sen. Richard Blumenthal (D-Conn.), whose state is home to many asset managers and investment gurus.

Private equity groups and hedge funds are already mobilizing to strike the provision from the budget package, warning Thursday that it would wind up hurting small businesses as well as endowments and pensions funds, according to a Reuters report.

Manchin, however, says he is “adamant” about keeping the carried-interest provision in the bill.

“I’m not prepared to lose” it, he said. “What we have is a good bill that’s fair with everybody. It’s a give-and-take proposition.

“I think the people that have benefited from carried interest for years and years and years knew that they had a good run, it was long overdue to get rid of it and you can’t justify it anymore.”

Senate Democrats, meanwhile, who were surprised last year by Sinema’s unexpected opposition to raising marginal income tax and corporate tax rates are being careful not to venture any predictions about where she’ll land on the issue.

“I don’t speak for Sen. Sinema, but obviously she’s reviewing the bill and she will have something to say about it soon,” Sen. Chris Murphy (D-Conn.) said. “I’m always hopeful.”