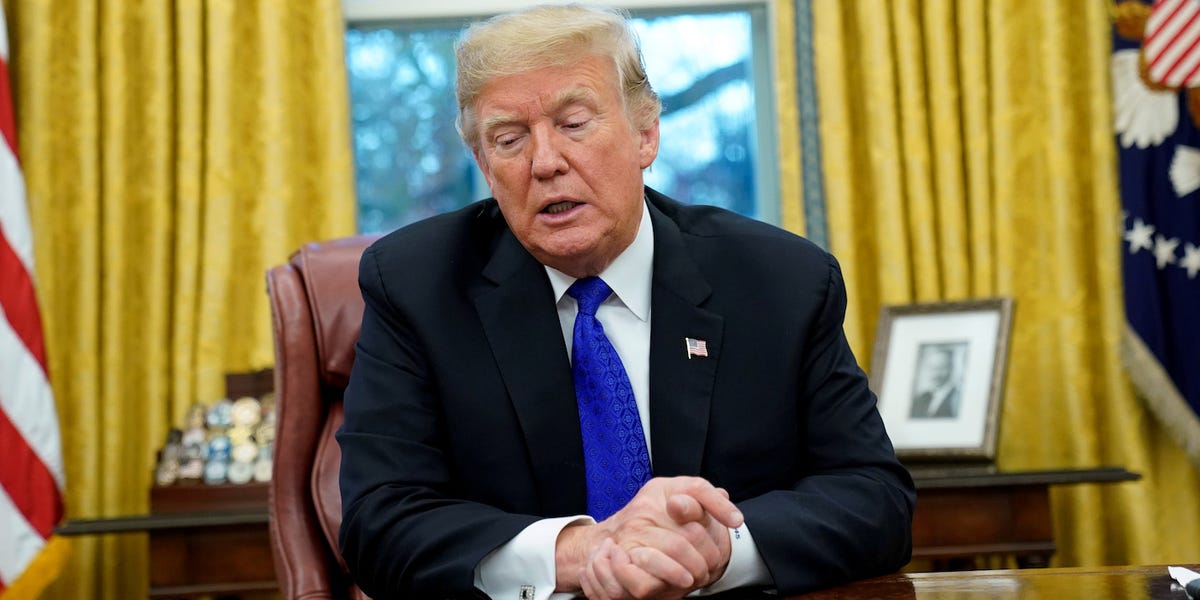 The former Trump White House official said “you knew your day was wrecked” when Ginni Thomas, wife of Supreme Court Justice Clarence Thomas, showed up at the White House to meet with President Donald Trump, according to a new report from the Daily Beast published on Friday.

Ginni Thomas, a longtime, outspoken activist who participated in the Tea Party movement, leveraged her prominence in conservative circles to get Trump’s ear, flatter him, and pitch him on potential hires for the White House and Trump, the Beast and other outlets have reported.

But before lobbying a top White House official on ways to overturn the 2020 election, Thomas was known for dropping by the White House and whipping Trump into a frenzy by dishing on who she believed to be disloyal and a “Never Trumper,” former aides told the Beast.

“We all knew that within minutes after Ginni left her meeting with the president, he would start yelling about firing people for being disloyal,” a former senior-level Trump administration official told the Beast. “When Ginni Thomas showed up, you knew your day was wrecked.”

And Thomas’ lists of who she thought Trump should fire from the administration “were frequently based on pure conjecture, rumor, or score-settling,” even targeting “steadfastly MAGA aides” who had not, in fact, been disloyal, the Beast reported .

Thomas’ lists of suggested hires were reportedly even more problematic.

Politician described the recommended hires on Thomas’ lists as including “friends of the couple, members of her right-wing network of activists and operatives at Groundswell,” Thomas’ grassroots conservative organization, and people Thomas believed would be unfailingly loyal to Trump.”

The Daily Beast further said that the lists also featured “infamous bigots and conspiracy theorists, woefully under-qualified names, and obvious close friends of Thomas,” and selections of names that caused aides to “laugh at them.”

Another official described the “fucking lists” as “insane and unworkable” to the Beast. But administration officials still had to do their due diligence.

Officials working in the White House Presidential Personnel Office, the office tasked with vetting possible hires, would take Thomas’ lists and mark them up with notes as to why the person couldn’t be hired — either because they couldn’t pass a background check , couldn’t obtain a security clearance, had obviously problematic flags in their background, or had already rebuffed a White House job offer.

In one case, the Beast reported, a note on one of Thomas’ recommended hires suggested that one person couldn’t be hired because they may have been a foreign spy.

“She was definitely trying to play a role and have influence,” another Trump White House official told Politico of Thomas. “But on the other hand, I don’t think there were a lot of folks on her list who ended up getting hired.”

In another now-infamous incident, Thomas convened a January 2019 meeting at the White House with conspiracy theorist Frank Gaffney that one former Trump official described to The New York Times Magazine as “the craziest meeting I’ve ever been to.” At the gathering, attendees spewed anti-transgender rhetoric and reportedly argued against women serving in the military.

Thomas is now under scrutiny for highly conspiratorial text messages she exchanged with then-White House chief of staff Mark Meadows after the 2020 election in which she strategized on ways to overturn Trump’s 2020 election loss. The messages were obtained by the House Select Committee investigating the January 6 insurrection and reported on by The Washington Post and CBS.

Since this news broke, more than two dozen Democrats have called on Clarence Thomas to resign from the Supreme Court or, at the very least, refuse himself from January 6-related cases.

Insider has reached out to Ginni Thomas for comment.