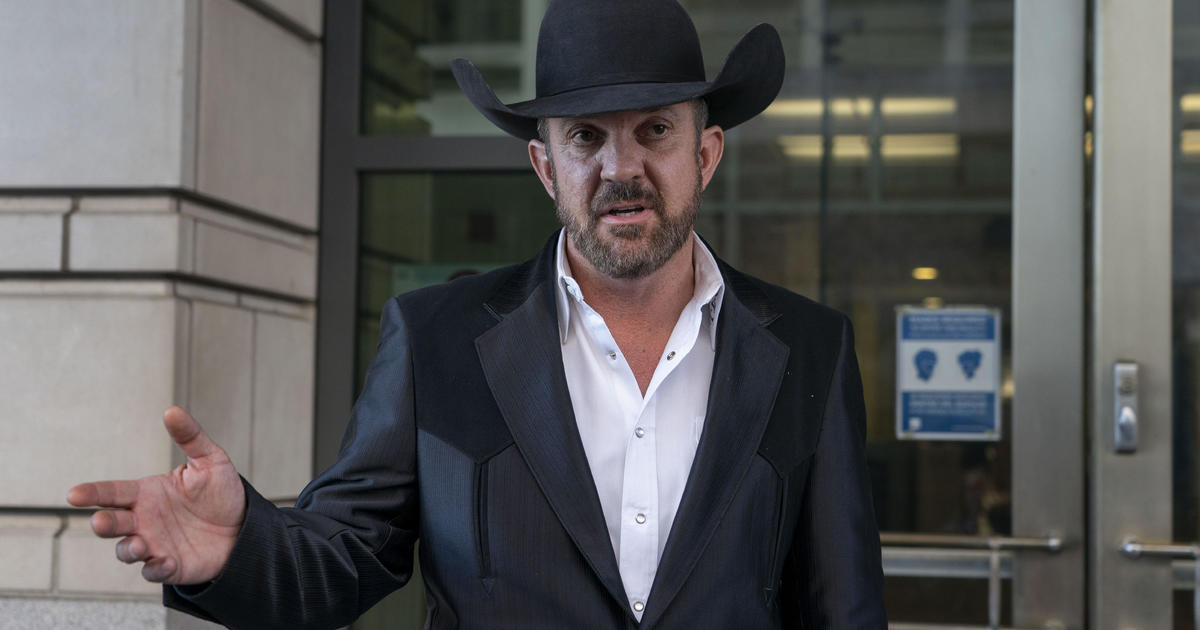 Washington – The founder of the “Cowboys for Trump” organization and Commissioner of Otero County, New Mexico has been found guilty of entering restricted US Capitol grounds on January 6but he was acquitted of another misdemeanor charge of disorderly conduct.

Judge Trevor McFadden ruled from the bench on Tuesday that Couy Griffin is guilty of the charge that amounted to illegally entering Capitol grounds in the vicinity of then-Vice President Mike Pencewho was in the Capitol building to certify the counting of the Electoral College votes and remained in the Capitol complex during the riot.

A United States Secret Service Inspector said Monday Pence was taken to an underground loading dock located underneath the Capitol building as the attack unfolded. Video of Pence’s movements throughout January 6 was released to the Court following a day-long effort that began Monday morning between prosecutors and the United States Capitol Police Board.

But McFadden found Griffin not guilty on the second charge of disorderly conduct, saying Tuesday Griffin’s attempt to get the crowd to pray with him “arguably” was not disorderly, but an attempt to calm the crowd down.

Griffin – who started his two-day trial by pulling up to the courthouse in a truck carrying a horse trailer and wearing a cowboy hat – was not accused of any act of physical violence or even entering the Capitol building at all on January 6, but of being present on the restricted Capitol grounds that law enforcement had cordoned off and closed to the public ahead of the election certification.

He was arrested in the weeks following the attack and held in pretrial detention before his legal team successfully won his court-ordered release. Griffin maintained his innocence from him and he was unaware that Pence was still continually in the area.

Unlike the first trial in the sprawling January 6 investigation in which a jury convicted rioter Guy Reffitt on multiple felony countsGriffin opted for a bench trial in which a federal judge would quickly hear evidence from both sides and decide his fate.

Griffin told CBS News that he would have opted for a jury trial anywhere else but Washington, DC, because he said it would hard to find a fair jury in DC “I wear January 6 as a badge of honor,” he said.”

Griffin, the first official elected to stand trial in the January 6 investigation, did not testify in his defense.

Although the trial lasted longer than expected as it entered its second day on Tuesday, McFadden ruled expeditiously in the split verdict.

Prosecutors’ star witness Monday was Matthew Struck, a videographer and one-time member of Cowboys for Trump who said he traveled with Griffin to Washington, DC ahead of former President Trump’s Save America rally on January 6. Struck was granted legal immunity in exchange for his testimony against his one-time friend.

Struck took iPhone videos documenting the Capitol attack and the government played some of those for the judge in which other members of the mob were seen scaling the walls of the Capitol building. Struck and Griffin were seen walking up a set of stairs to a temporary platform on the building’s west front erected for President Biden’s inauguration.

“I love the smell of napalm in the air,” prosecutors alleged Griffin said in one of the videos as he walked up to the inaugural stage. Struck had to listen to his video from him from the riot a couple of times in court on Monday to decipher what the defendant actually said before he ultimately agreed with prosecutors. The government argued this and other statements made both during and after the riot indicated Griffin knew he on restricted grounds.

The crowd was chanting “stop the steal” as Struck said Griffin, who is also a pastor, attempted to pray over them and acted non-violently.

“We were there to pray. We prayed and then we left,” Struck said of the duo’s presence at the Capitol during cross-examination. He testified that Griffin did not threaten any physical violence or even interact with any law enforcement officers outside the building.

Prosecutors also played for the court videos Struck took of Griffin before and after the riot that they said Struck only recently turned over amid new requests for evidence. The defense said these videos should not be allowed into evidence because the government shared the videos for review too soon before trial and the judge ruled that most should be barred from evidence out of fairness to the defendant. .

“It was just like a huge amazing Trump rally,” Griffin recounted in one of the videos shot on January 7, 2021, “I sat two feet from where Joe Biden or whoever will be inaugurated in as president.”

“We have the defendant’s own statements that he knew this area was restricted,” prosecutor Janani Iyengar in her closing statement on Tuesday that the judge’s attempt to convince the judge against Griffin is a simple one. “The defendant was upset about the election having been certified.”

Also at issue during the bench trial was the contested testimony of United States Secret Service Inspector Lanelle Hawa, who prosecutors called to confirm that then-Vice President Mike Pence was indeed present within the restricted Capitol complex and intended to return to the Capitol building on January 6, the vital component of the charges against Griffin.

The government unsuccessfully sought to limit the types of questions the defense could ask Hawa during cross-examination so as to avoid disclosing potentially sensitive information about Pence’s whereabouts. The judge rejected this attempt, explaining that Pence’s location on January 6 is relevant to the charges in Griffin’s case and it was up to the government to balance proving its case with confidentiality.

Hawa and a Capitol Police inspector who also testified who also said that in anticipation of Pence’s work on Capitol Hill on January 6, the entire Capitol building and the underground Capitol Visitor Center and loading dock were not open to the public. The restricted area, Hawa said, was not unique, but an “agreed-upon a standard boundary” based on a long-standing relationship between the Secret Service and Capitol Police.

As the mob descended upon Capitol grounds, Pence was taken from the Senate floor to his ceremonial office and then ultimately to a secure, underground loading dock located underneath the Capitol building, under the plaza on the Senate side, during the Capitol riot, Hawa said Monday.

Defense attorney Nicholas Smith argued throughout both in pretrial filings and the bench trial that the case was more complex than the government’s presentation. “This case is built on a series of false assumptions and premises,” he said.

His client did not know Pence was in the Capitol complex during the riot, but instead thought the election had already been certified and Pence had left the area, meaning the Capitol complex was no longer restricted. Regardless of what really happened, argued Smith, Griffin’s mind” was that he was not coming anywhere close to the sitting Vice President and thus not breaking the law, an argument that McFadden appeared skeptical about even before convicting Griffin, calling it ” preposterous” in practicality.

“Nobody thinks that random tourists can just waltz up there, right,” the judge asked Smith during Tuesday’s closing arguments, to which the defense attorney quickly shot back that case law makes it clear legal precedent says otherwise. Griffin was praying and speaking to a calm part of the mob, Smith said, “that’s the opposite of incitement.”

The judge agreed with the defense on point, acquitting Griffin of disorderly conduct of what he said was a failed attempt by prosecutors to charge the defendant’s actions as meeting the legal definition of disorderly.

Griffin faces up to a year in prison.

Assault On The US Capitol