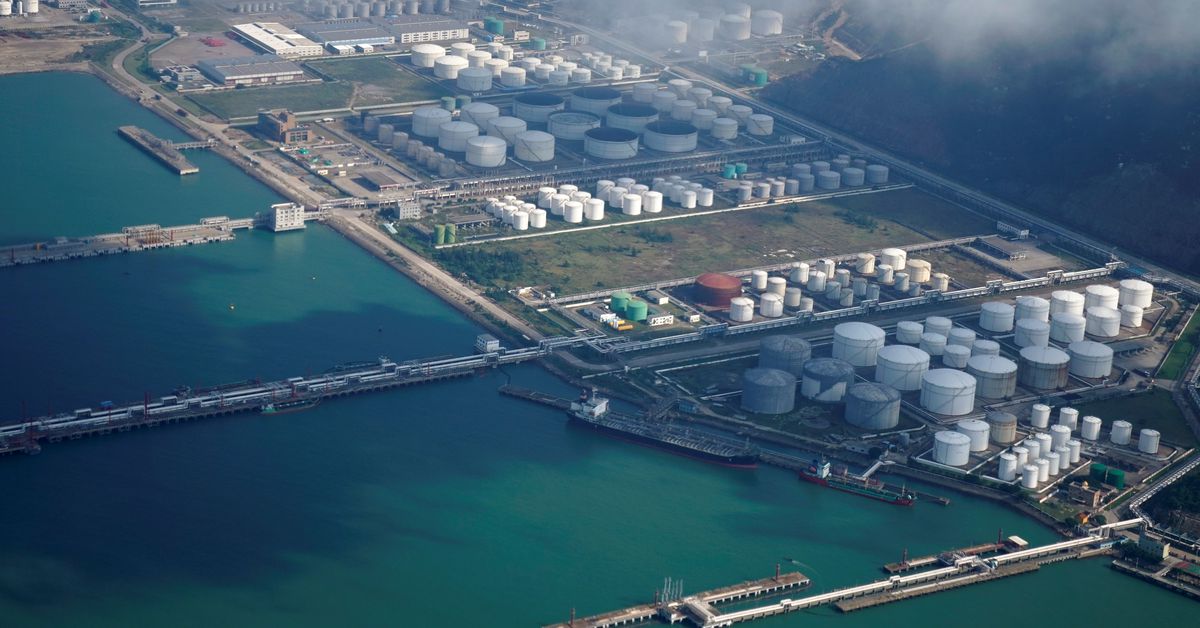 Oil and gas tanks are seen at an oil warehouse at a port in Zhuhai, China October 22, 2018. REUTERS/Aly Song

SINGAPORE, June 20 (Reuters) – China’s crude oil imports from Russia soared 55% from a year earlier to a record level in May, displacing Saudi Arabia as the top supplier, as refiners cashed in on discounted supplies amid sanctions on Moscow over its invasion of Ukraine.

Imports of Russian oil, including supplies pumped via the East Siberia Pacific Ocean pipeline and seaborne shipments from Russia’s European and Far Eastern ports, totaled nearly 8.42 million tonnes, according to data from the Chinese General Administration of Customs.

That’s equivalent to roughly 1.98 million barrels per day (bpd) and up to a quarter from 1.59 million bpd in April.

The data, which shows that Russia took back the top ranking of suppliers to the world’s biggest crude oil importer after a gap of 19 months, indicates that Moscow is able to find buyers for its oil despite western sanctions, though it has had to slash prices .

And while China’s overall crude oil demand has been dampened by COVID-19 curbs and a slowing economy, leading importers, including refining giant Sinopec and trader Zhenhua Oil, have stepped up buying cheaper Russian oil on top of sanctioned supplies from Iran and Venezuela that allows them to scale back competing supplies from West Africa and Brazil. read more

Saudi Arabia trailed as the second-largest supplier, with May volumes up 9% on year to 7.82 million tonnes, or 1.84 million bpd. This was down from April’s 2.17 million bpd.

Despite US sanctions on Iran, China has kept taking Iranian oil, usually passed off as supplies from other countries. The import levels are roughly equivalent to 7% of China’s total crude oil imports. read more

China’s overall crude oil imports rose nearly 12% in May from a low base a year earlier to 10.8 million bpd, versus the 2021 average of 10.3 million bpd. read more

Customs reported zero imports from Venezuela. State oil firms have shunned purchases since late 2019 for fear of falling foul of secondary US sanctions.

Imports from Malaysia, often used as a transfer point in the last two years for oil originating from Iran and Venezuela, amounted to 2.2 million tonnes, steady versus April but more than double the year-earlier level.

Imports from Brazil fell 19% from a year earlier to 2.2 million tonnes, as supplies from the Latin American exporter faced cheaper competition from Iranian and Russian barrels.

For the first five months, imports of Russian LNG – from mostly Sakhalin-2 project in the Far East and Yamal LNG in Russian Arctic – rose 22% on the year to 1.84 million tonnes, according to customs data.

Below is the detailed breakdown of oil imports, with volumes in million tonnes: