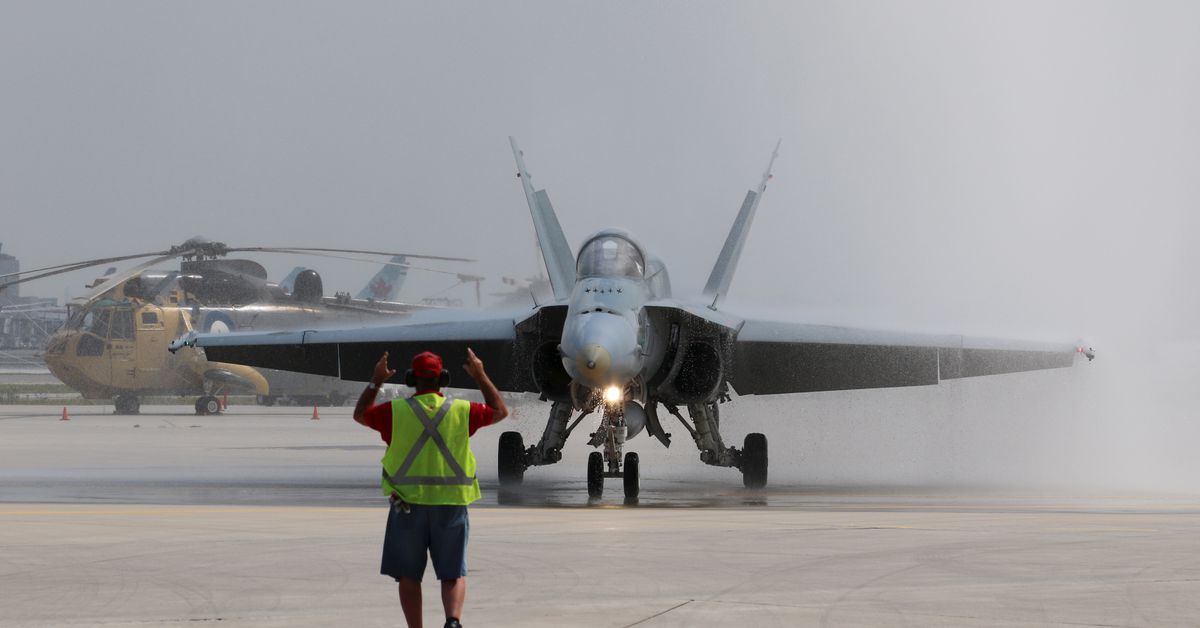 A Canadian CF-188 Hornet is guided under a water salute during media day for the Canadian International Air Show in Toronto, Canada, September 3, 2015. REUTERS/Louis Nastro

BEIJING/OTTAWA, June 6 (Reuters) – Diplomatic tensions between China and Canada are rising again, with each country accusing the other of using their military aircraft flying near North Korea of ​​provocation and harassment.

“The UN Security Council has never authorized any country to carry out military surveillance in the seas and airspace of other countries in the name of enforcing sanctions,” foreign ministry spokesman Zhao Lijian said at a media briefing.

Canadian Prime Minister Justin Trudeau, speaking to reporters in Ottawa, responded that Canadian planes were participating in a UN mission.

China’s actions “are irresponsible and provocative” and “are putting people at risk, while at the same time not respecting decisions by the UN to enforce UN sanctions on North Korea,” Trudeau said.

Wu Qian, a defense ministry spokesman, said the Chinese military took reasonable measures to deal with Canada’s actions and have made “solemn representations” via diplomatic channels.

China’s defense ministry said in a statement that Canadian military jets have stepped up reconnaissance and “provocations” against China “under the pretext” of implementing UN Security Council resolutions, endangering China’s national security.

The rise in tensions between Canada and China follows Ottawa’s decision last month to ban the use of 5G gear from China’s Huawei Technologies Co. due to national security concerns. read more

That decision had been delayed after Canada’s detention of Huawei executive Meng Wanzhou in 2018 on behalf of the United States, and Beijing’s subsequent arrest of two Canadians on spying charges. That standoff ended when all three were released in September after US prosecutors reached a deal with Meng.

Reporting by Beijing Newsroom and Yew Lun Tian in Beijing and Ismail Shakil in Ottawa, writing by Liz Lee and Steve Scherer Editing by Simon Cameron-Moore and Tomasz Janowski