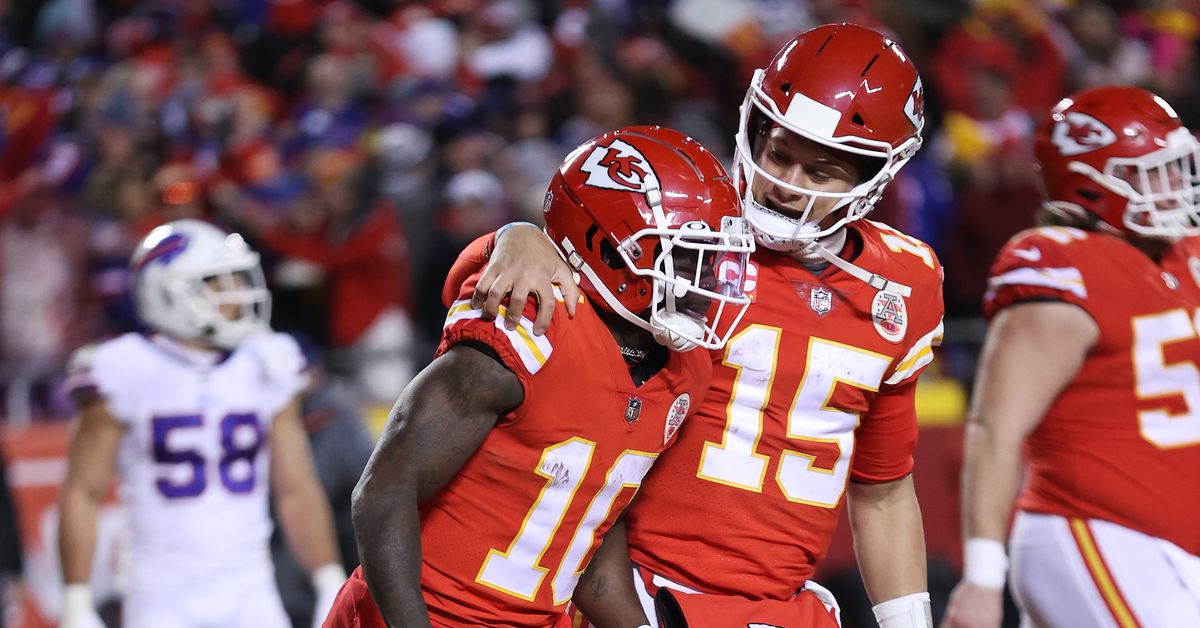 Kansas City Chiefs quarterback Patrick Mahomes appears to be making the offseason rounds this week, first stopping by Yahoo! finance to discuss the changed overtime rule and Tom Brady coming out of retirement.

on Friday, Sports Illustrated’s Albert Breer dropped a column on Mahomes after speaking one-on-one with him via Zoom, and inside were the quarterback’s first words about the blockbuster trade that sent Tyreek Hill to the Miami Dolphins in exchange for five draft picks over the next two years.

“It more surprised me whenever it got to the point where we were really considering trading him,” Mahomes told Breer. “They kept me updated the entire time; I knew the extension talks were going on. And then I knew when he got the permission to seek to get traded. But I mean, still, I played my entire career with Tyreek, so definitely, there was a little bit of shock when he got traded.

“At the same time, they kept me involved the entire process, and I know that we made a tremendous effort to try to keep him in Kansas City. Tyreek, he’s such a tremendous player, he got what he deserved. I’m happy for him. And he’s at a place where he has a home and he’s closer to family and stuff. So I’m very happy for him. We had to move forward.”

From 2016 to 2021, Chiefs fans watched as Hill developed from a return specialist and gadget weapon into one of the best receivers in the NFL. Hill’s first two seasons came with Alex Smith at the helm. With Mahomes as the starter from 2018-21, he compiled more than 5,000 scrimmage yards and 46 total touchdowns.

So it made plenty of sense that general manager Brett Veach and head coach Andy Reid kept Mahomes in the loop when it came to such a significant change to the offense. What maybe was a little more revealing was the quarterback telling Breer that has been the case since his first year as the team’s starter in 2018.

“I’ve been involved pretty much my entire career (as a starter),” said Mahomes. “I mean, I remember when we signed Sammy Watkins. I’m not saying who we need to sign and who we don’t need to sign and all this different type of stuff. But they let me know what they’re thinking and why they’re thinking it, and I think that’s why the relationship that we have in Kansas City is so great with Coach Reid and Veach and everybody, it’s they keep everybody informed of where we ‘re going and what the vision is of the future.

As has been outlined on these pages, while Hill will be difficult to replace, it it hurts offer the Chiefs a silver lining in the fact that much of the offensive tape from previous seasons will prove useless when trying to prepare for the 2022 Chiefs.

While in recent years, opposing defenses knew they would have to prepare for two star players — Hill and tight end Travis Kelce — this year’s offense projects to be a much more balanced attack. Mahomes seems to like that idea.

“I think that’ll be something that will help me a ton this next year because more than having that one guy that we had with Tyreek that’s so dynamic, that can even if he’s double-covered make something happen, I’ll be able to spread the ball around more this year and let these other guys make plays happen… I think it’ll help our offense in a sense where they can’t just focus on Travis and Tyreek, Travis and Tyreek.”

The new pass-catchers include wide receivers JuJu Smith-Schuster and Marquez Valdez-Scantling, who said Mahomes was the first person to call him when word broke that he was simply visiting Kansas City. The two made plans to throw together down in the state of Texas, where he spends his offseasons.

“I actually have a lot of guys coming in the end of this week and we’re going to continue the rest of the offseason and OTAs,” Mahomes said. “We will be together and working. We have a whole new receiving room, so I’m gonna get these guys together as much as possible just to build those relationships, as much as me getting to work with them. So I think by the time we get to the season, we’ll have a tight-knit group with a lot of great playmakers.”

Now a sixth-year veteran (where did the time go?), Mahomes knows that building a rapport with his new weapons will be key to the Chiefs’ success in 2022, and he’s rightly getting a head start. September will be here before we know it.

Read Breer’s full article in which Mahomes discusses the offensive line and more about his offseason by clicking here.