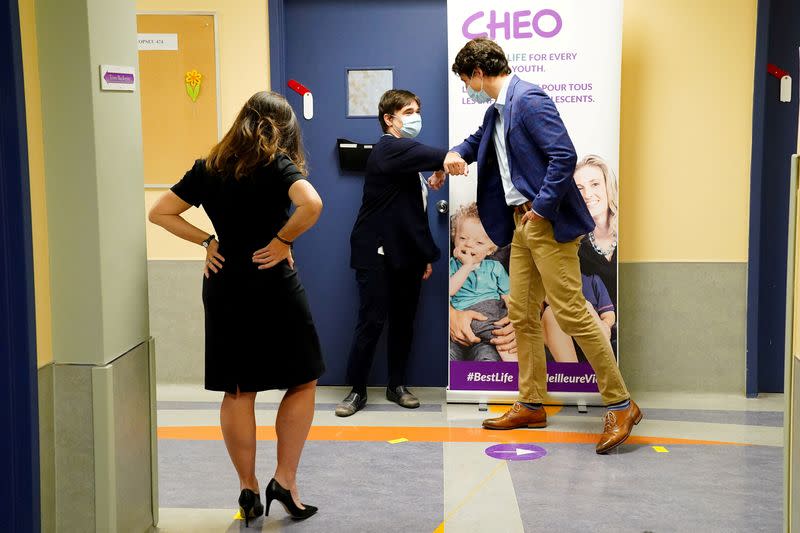 TORONTO (Reuters) – Health authorities across Canada have cut the hours of hospital emergency departments and urgent care clinics in recent weeks, a move that in some cases may extend through the summer, due to a surge in patients and staff shortages.

The situation, clinicians say, is tied to a resurgence of viral infections such as COVID-19 among adults and children and a push by others to seek care delayed by the pandemic, and exacerbated by the high number of healthcare workers who are sick or burned out

The strain has led to scenes of clogged hospital hallways and overflowing clinic waiting rooms, hours-long waits for inpatient care and occupancy rates of more than 100% at children’s hospitals. It has also rekindled debate about systemic problems in the government-funded healthcare system.

On Thursday, the Perth and Smiths Falls District Hospital in eastern Ontario announced that its emergency department in Perth would be closed from Saturday to Thursday due to a COVID-19 outbreak affecting its staffing.

“It’s like the four horsemen of the apocalypse all descending on us in health care at once,” said Alan Drummond, a family and emergency physician based in the town, which is home to about 6,000 people.

Drummond, who spoke with Reuters before the closure was announced, sees patients waiting 20 hours to be admitted, a situation that can lead to deterioration in their condition or even medical errors. He blames the situation on years of inadequate funding of hospital beds and community care.

While hospitals in small towns and cities in Canada do sometimes reduce their hours, it is rarer for regional health hubs to do so.

Ontario’s health ministry would not say how many hospitals in the province, Canada’s most populous, are affected by partial or temporary closures, but said it has taken measures to address the issue, including retaining nurses and other healthcare workers.

“Sometimes hospitals must make the difficult decision to close their emergency departments temporarily so that operations can continue throughout the rest of the hospital,” the spokesperson ministry said.

Hospitals in Quebec, the country’s second-largest province, New Brunswick and Manitoba also have partially shut departments or temporarily cut hours for anywhere from a couple of weeks to a number of months, according to statements from the hospitals.

In Kingston, Ontario, the Hotel Dieu Hospital’s Urgent Care Clinic reduced its hours over the Canada Day long weekend. A spokesperson for the Kingston Health Science Center described the move, which began on Friday, as a planned one-time reduction, but added it was expected that “staffing shortages and the current arises in patient volumes will continue throughout the summer.”

Children have been hard hit by the healthcare crunch as youngsters with no prior exposure to a number of viruses succumbed to illness during the spring as many people abandoned face masks used to prevent the spread of COVID-19.

The Children’s Hospital of Eastern Ontario in Ottawa, the nation’s capital, ran at between 110% and 120% capacity for weeks in May and early June. Occupancy was a record high for the month of May, a spokesperson said.

Low staffing and surging patient loads is “kind of like that perfect storm,” said Katharine Smart, a pediatrician who is the president of the Canadian Medical Association.

Canada has the fourth-lowest number of funded acute care beds per capita among countries in the Organization for Economic Cooperation and Development, according to the OECD https://www.oecd.org/coronavirus/en/data-insights/hospital-beds -acute-care, and the Commonwealth Fund ranked https://www.commonwealthfund.org/publications/fund-reports/2021/aug/mirror-mirror-2021-reflecting-poorly#rank Canada’s health system second-last among 11 rich countries.

Some blame underfunding of the healthcare system dating back to the 1990s, when Canada’s federal government cut spending to get the country’s deficit under control.

Others, such as the right-leaning Fraser Institute https://www.fraserinstitute.org/studies/understanding-universal-health-care-reform-options-cost-sharing-for-patients, say the government-funded system itself is the root cause of the problems, suggesting moving toward a privately-paid model.

Canada may have little time to waste.

Rami Rahal, vice president at the Canadian Partnership Against Cancer, said there is a danger that cancer illness and deaths could worsen in the country due to lengthy periods in which screening was skipped or delayed and postponed treatment.

“We can’t hire our way out of this crisis,” he said. “We have to find innovative ways of delivering care.”