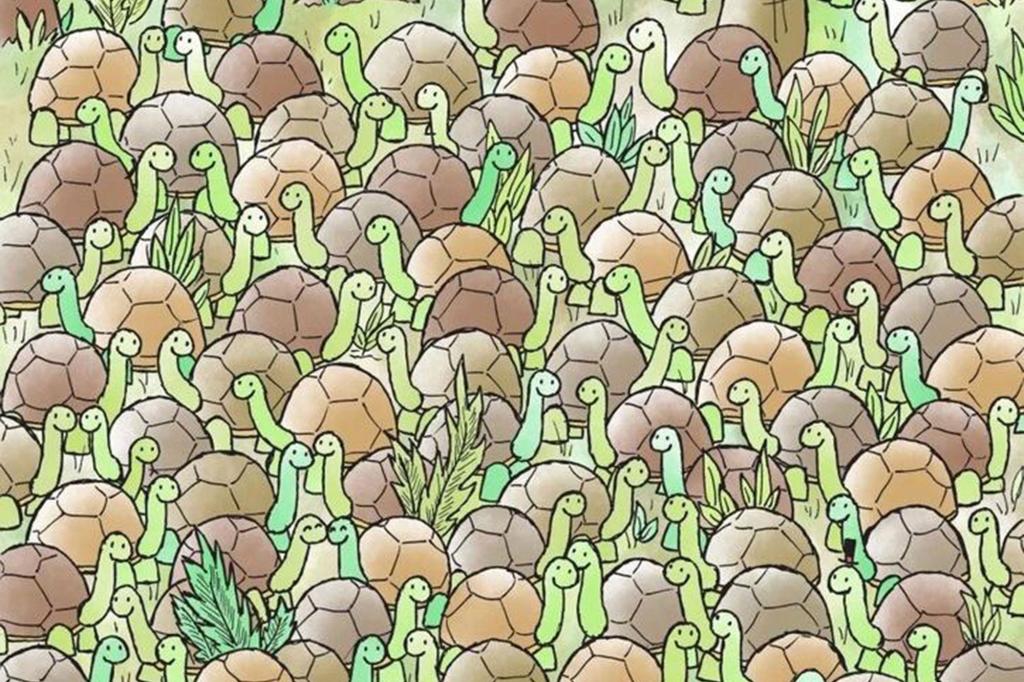 This is an especially ssssssneaky snake.

This time out, viewers are challenged to find the one snake amongst a sea of ​​turtles.

In addition, anyone who spots the serpent in under 15 seconds will reportedly break the world record, according to people who track this sort of success rate.

The herpetological “Where’s Waldo,” created by Hungarian cartoonist and illusion maven Gergely Dudás, shows a gathering of green and brown tortoises in a grassy field with the slitherer seemingly nowhere in sight.

Locating the snake in the grass is particularly tricky given that the snake looks identical to the turtles’ long, green necks.

Fortunately for frazzled puzzlers, Dudás provided a handy spoiler that shows the sneaky snake poking its head from behind a turtle shell in the lower left hand corner. This critter is the one shell-less head and neck popping up in the sea of ​​snakes.

Still can’t spot it? When you give up, scroll to the bottom of this page for the reveal.

This isn’t the time the artist has created a puzzle that strained viewers’ brains to the max.

In another one of his needle-in-a-haystack-esque drawings, viewers are challenged to find the mouse amongst the mushrooms in under a minute.

Meanwhile, another illusion invites puzzle lovers to locate the coconuts in a veritable mosh pit of brown bears.

Full disclosure: Optical illusions such as this are often just intended as a lighthearted diversion from the stresses of modern life — but they also hold legit scientific value for medical professionals. These brain teasers are credited with helping researchers shed light on the complex inner workings of the human mind and how it reacts to its surroundings.

Dr Gustav Kuhn, a psychologist and human perception expert at Goldsmiths University in London, once declared to The Sun that illusions are important to our understanding of the brain: “We typically take perception for granted, and rarely think about the hard work that underpins everyday tasks, such as seeing a cup of coffee in front of you.”