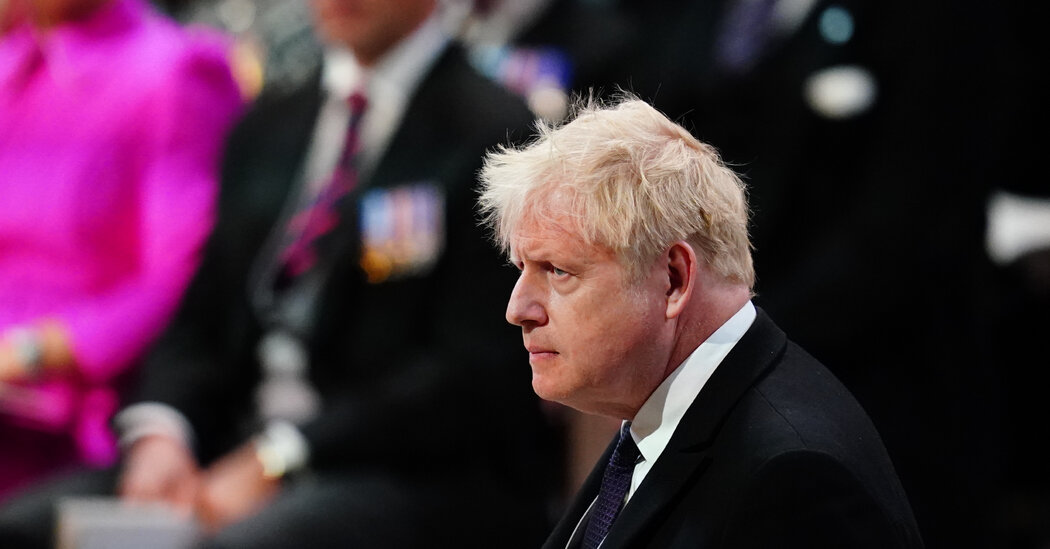 But during the four-day celebration of the queen’s 70 years on the throne, Mr. Johnson’s troubles were on full display, highlighting national discontent with the prime minister, and putting his public persona in stark relief with that of the queen.

Throughout the weekend, as Mr. Johnson took part in the jubilee celebrations, members of the public — and even participants — made their contempt known.

Mr. Johnson and his wife, Carrie Johnson, were booed as they walked up the steps of St. Paul’s Cathedral on Friday ahead of a service of thanksgiving. Videos circulated showing a similar response as they attended a Saturday night concert outside Buckingham Palace. And during the concert two actors, Lee Mack and Stephen Fry, made digs at Mr. Johnson on the national stage.

But it was the revelers who crowded London streets during the long weekend who remarked — unprompted and often — about their distrust of the government, even as they reflected on their admiration for the queen, providing an insight into how the public at large viewed their leader .

Marian Argent, 77, who had gathered with three generations of her family on the Mall outside Buckingham Palace for the Trooping the Color parade on Thursday, remarked that the Queen was a unifying force, “unlike politicians.”

She rolled her eyes as she remarked “Boris,” with a sigh, before quickly shifting her focus back to the festivities.

In Hyde Park on Friday, Marina Burns, 60, said of the celebrations for the Queen: “It’s all apolitical, that’s why it’s so unifying.”

“Meanwhile, politics is a mess,” Ms. Burns added. “It is absolutely dreadful at the minute with Boris and Partygate.”

She said she considered the jubilee celebrations as one of the first post-Covid moments that the nation could actually find joy in, amid the “doom and gloom” of failing leaders, economic hardship and pandemic losses.

A few park benches away, Erwin Kunnen, 60, who was visiting from the Netherlands and waiting to depart for his flight home, also pointed to the “mess with the prime minister” as one of the many difficulties Britain was currently facing, and why so many people were excited for the positivity of the jubilee.

Catherine Cooke, 48, who works for the National Health Service, also tucked an exasperated comment about the failings of the government into an otherwise glowing account of the festivities.

Ms. Cooke, when reflecting on the “great respect” for the Queen because of her sense of duty to the country, adding, “Our politicians, like Boris, not so much.”

The comments on the streets of London may be indicative of a greater national sentiment, with Mr. Johnson’s approval rating in a YouGov poll dropping to just 26 percent by the start of May. On the heels of the Sue Gray report late last month that highlighted the government’s failure of leadership during coronavirus lockdowns, add up to 60 percent of people surveyed by YouGov said that Mr. Johnson should no longer be the leader of the Conservative Party.

A snap poll from Opinion on Monday morning, hours after the vote was announced, found that 28 percent of voters think that Conservative lawmakers should vote to keep Mr. Johnson, while 59 percent believed they should vote to remove him.