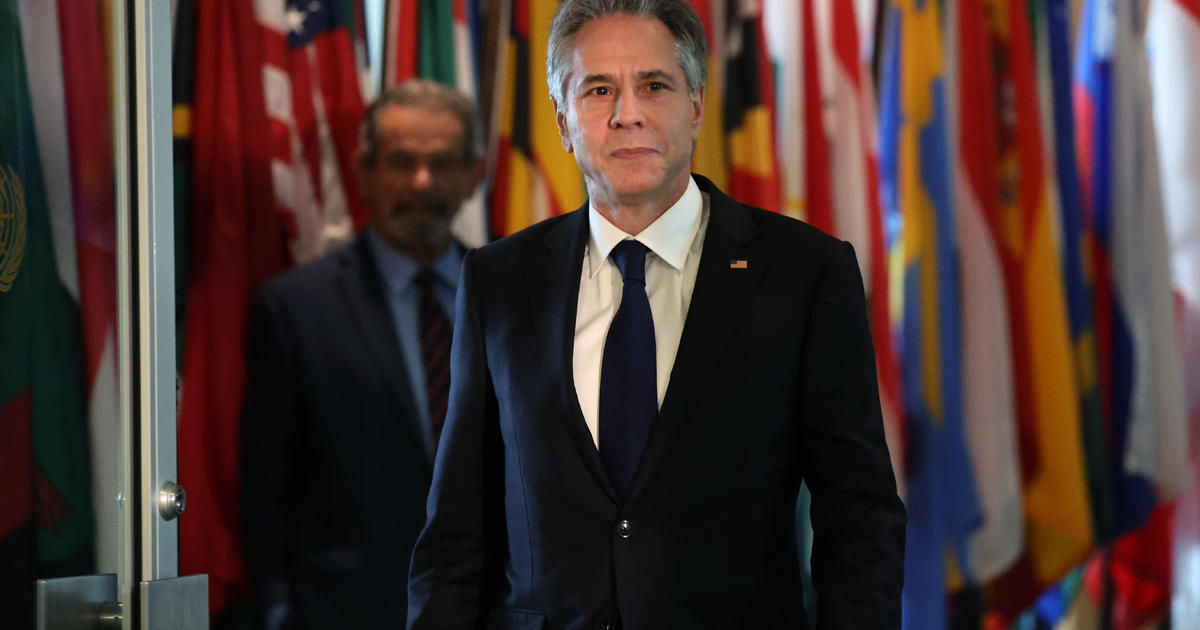 United Nations – Secretary of State Antony Blinken spoke at the United Nations Monday about what he called “a critical moment” in efforts to keep the world safe from nuclear threats.

“There are credible reports, including in the media today, that Russia is using this plant as the equivalent of a human shield, but a nuclear shield in the sense that it’s firing on Ukrainians from around the plant and of course, the Ukrainians cannot and will not fire back lest there be a terrible accident involving a nuclear plant,” Blinken added, saying that it “is the height of irresponsibility.”

International Atomic Energy Agency (IAEA) chief Rafael Grossi and UN Secretary General Antonio Guterres are also at United Nations headquarters in New York for the opening days of the nuclear review conference, which had been postponed since 2020, at a time when nuclear weapons threats and nuclear safety are of rising concern among world leaders.

“Today, humanity is just one misunderstanding, one miscalculation away from nuclear annihilation,” the UN secretary general said.

Grossi, the international watchdog chief, pointed to the war in Ukraine as “so serious that the specter of a potential nuclear confrontation, or accident, has raised its terrifying head again.”

“It is urgent,” he said last week, since the agency has not been able to visit the site since before the conflict began five months ago. On Monday, Grossi was clear about the dangers: “While this war rages on, inaction is unconscionable.”

“If an accident occurs at Zaporizhzhia Nuclear Power Plant, we will not have a natural disaster to blame — we will have only ourselves to answer to,” Grossi said, adding, “We need everyone’s support.”

Blinken told CBS News at a press encounter that “Ukraine had the confidence to give up the (nuclear) weapons that it inherited when the Soviet Union dissolved because of commitments that Russia made to respect and protect its sovereignty, its independence, its structural integrity. ”

“The fact that Russia has now done exactly the opposite, that it’s attacked Ukraine, unprovoked in an effort to erase that sovereignty and independence that sends a terrible message to countries around the world that are making decisions about or not to pursue nuclear weapons, “Blinken said.

He was referring to the 1994 Budapest Memorandum, an agreement in which the United States, Russia and Britain committed “to respect the independence and sovereignty and the existing borders of Ukraine” following the collapse of the Soviet Union, and “to refrain from the threat or use of force against it — assurances that convinced Ukraine to give up “what amounted to the world’s third largest nuclear arsenal, consisting of some 1,900 strategic nuclear warheads,” according to a Brookings analysis.

The Nuclear Nonproliferation Treaty, established in 1968 to prevent the spread of weapons technology, sought to keep the number of nuclear states to a minimum — but keeping the nuclear genie in the bottle has been an uphill battle. Nuclear-armed states at the time were Britain, China, France and Russia (the Soviet Union at the time), and the number of nuclear weapons they hold has decreased since the peak of the Cold War. But in the years since, India, Pakistan and North Korea have developed nuclear weapons and Israel is believed to have a nuclear arsenal, though it has neither confirmed nor denied the existence of a program.

Iran is moving forward with its nuclear program since the US withdrew from the 2015 nuclear pact, but it has not yet produced a weapon. Iran’s atomic energy chief said this week that Iran has the ability to build a nuclear weapon but has no plan to do so.

The UN conference will continue throughout August and the nuclear activities of North Korea and Iran are sure to be discussed daily.

North Korea “continues to expand its unlawful nuclear program and continues its ongoing provocations against the region,” Blinken said. “As we gather today, Pyongyang is preparing to conduct its seventh nuclear test.”

The secretary general’s assessment of nuclear threats was chilling: “The risks of proliferation are growing and guardrails to prevent escalation are weakening.”

Guterres heads to Hiroshima at the end of the week, marking the anniversary of the US nuclear bombing in World War II – an event that is not lost on the speakers at the event. Japan’s Prime Minister Fumio Kishida said that Russia’s indirect warning that it could use nuclear weapons in the Ukraine war has added “to worldwide concern that yet another catastrophe by nuclear weapon use is a real possibility.”

Blinken also made a point of responding to the threats China has made about the possibility of House Speaker Nancy Pelosi visiting Taiwan, a self-governing island that China is determined to reunite with the mainland.

Blinken said: “The speaker will make his own decisions about whether or not to visit Taiwan. Congress is an independent co-equal branch of government — the decision is entirely the speaker’s.”

“If the speaker does decide to visit, and China tries to create some kind of crisis, or otherwise escalate tensions, that would be entirely on Beijing,” Blinken said. “We are looking for them, in the event she decides to visit, to act responsibly and not to engage in any escalation going forward.”

On Monday China’s UN Ambassador Zhang Jun said that China will defend its security and sovereignty if Pelosi visits Taiwan. He called the potential visit “provocative and serious.”

Pamela Falk is the CBS News correspondent covering the United Nations, and an international lawyer.