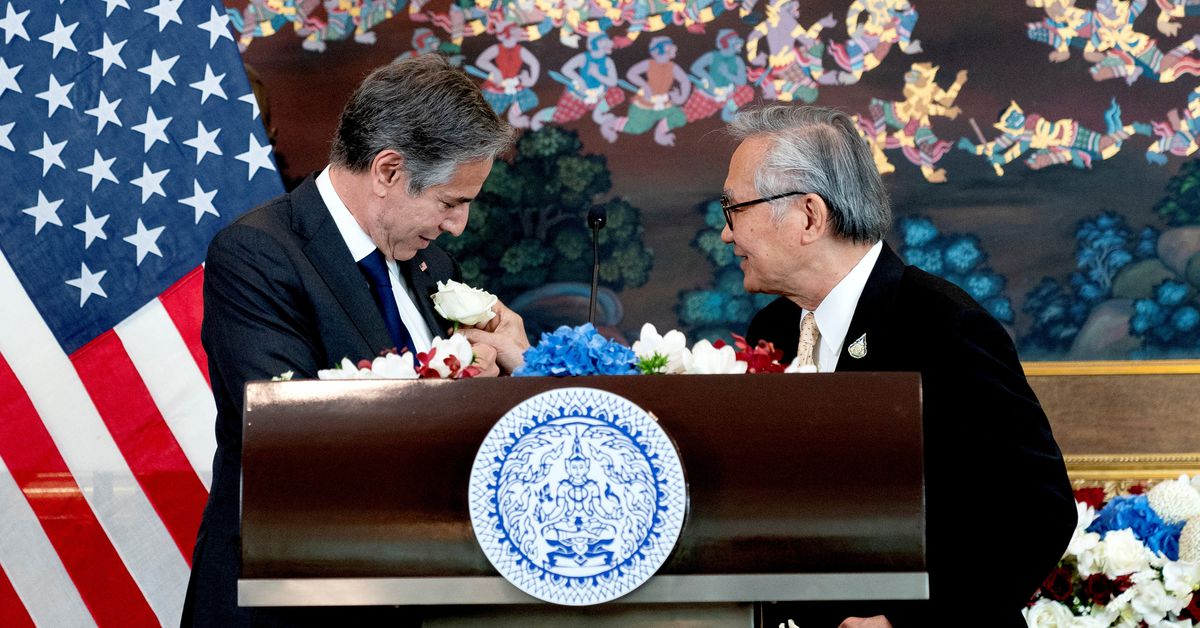 BANGKOK, July 10 (Reuters) – US Secretary of State Antony Blinken on Sunday urged China and members of the Southeast Asian bloc ASEAN to put pressure on Myanmar’s rulers to return to democracy and to hold it accountable to a peace deal agreed with the group.

“It is incumbent on China and in China’s interest to see Burma move back to the path it was on,” Blinken said, using the country’s former name.

Speaking at a news conference in Bangkok during a tour of Asia, Blinken called on members of the Association of Southeast Asian Nations (ASEAN) to hold Myanmar’s government accountable to a “five-point consensus” peace agreement.

“Regional support for the regime’s adherence to the five point consensus developed by ASEAN is critical – that has not happened,” Blinken said.

“The ASEAN countries need to hold the regime accountable for that … continue to demand the cessation of violence and release of prisoners,” he added.

“There has been no positive movement on that.”

Myanmar’s military has increased pressure against ethnic minority armies since a coup last year and is encountering resistance on multiple fronts, including militia groups allied with the bold government.

Thailand’s Foreign Minister Don Pramudwinai places a flower on the jacket of US Secretary of State Antony Blinken following remarks to the press after a Memorandum of Understanding signing ceremony at the Thai Ministry of Foreign Affairs in Bangkok, Thailand, July 10, 2022. Stefani Reynolds/ Pool via REUTERS

The United States and Thailand on Sunday signed agreements to deepen the countries’ already strong ties as Washington steps up its efforts to counter China’s expanding influence in Asia.

China’s Wang has been engaged in intense diplomacy across Asia in recent weeks and met Thai Prime Minister Prayuth Chan-ocha on Tuesday.

Blinken last year postponed a trip to Thailand, the oldest US ally in Asia, after halting a regional tour when a COVID-19 case was found in the press corps monitoring him.

After meeting Blinken, Prayuth said the relationship between the two countries “continue to increase in momentum.”

The Biden administration has sought to shore up ties with a region that had become uncertain about US commitment during a period of perceived neglect under Biden’s predecessor, Donald Trump. At that time, China expanded its influence while pushing investment and trade integration.

After Thailand, he will make a previously unscheduled stop in Tokyo to offer condolences to the Japanese people after the killing of former Prime Minister Shinzo Abe, the State Department said. read more