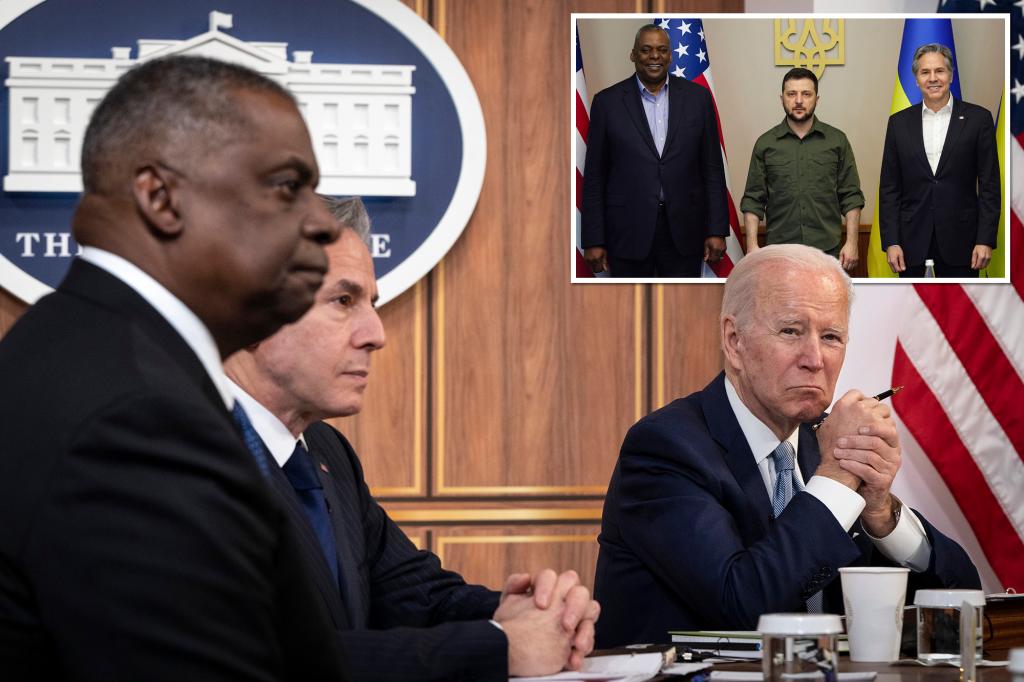 President Biden was reportedly unhappy with his secretaries of defense and state earlier this year after they publicly stated the US wanted Ukraine to defeat Russia in its brutal invasion that had begun months before.

During the trip, where they met with Ukrainian President Volodymyr Zelensky, Austin told reporters, “Ukraine clearly believes that it can win, and so does everyone here.”

Additionally, Austin said the US wants to see “Russia weakened to the degree that it can’t do the kinds of things that it has done in invading Ukraine.”

“I think the secretary said it very well,” Blinken agreed when pressed on the remarks.

Austin’s firm comments appeared to be the first hard stance a top Biden administration official was taking in support of Russia’s defeat — yet to the president, it reportedly went too far.

As the two secretaries traveled home, they were conferenced into a call with Biden, who asked them to tone down the comments, multiple officials told NBC News.

The officials revealed that the president was concerned the comments could set unrealistic expectations about the war and potentially increase the risk of the US becoming directly involved.

During the call, Austin and Blinken reportedly told Biden that the comments had been misunderstood and provided the president with full context.

One official told the outlet that ultimately, Biden did not admonish the two secretaries and that it is still the goal of the US to see Ukraine defeat Russia.

The White House and National Security Council did not immediately respond to The Post’s requests for comment.

Russia began its brutal invasion of Ukraine on Feb. 24 and has repeatedly failed to take key cities such as Kyiv and Odessa. As the war had raged on for nearly four months, some European officials had begun to suggest Zelensky negotiate with the Kremlin.

The US, however, has not wavered in its position that that decision is entirely up to Ukraine.

“We are not pressuring them to make concessions, as some Europeans are. We would never ask them to cede territory,” one US official told NBC News. “We are planning for a long war. We intend to prepare the American people for that, and we are prepared to ask Congress for more money.”

On Wednesday, Biden announced another $1 billion in security assistance and $225 million in humanitarian aid for the Eastern European country after speaking with Zelensky on the phone.

“This morning, I spoke with President Zelensky to discuss Russia’s brutal and ongoing war against Ukraine,” Biden said following the call. “I reaffirmed my commitment that the United States will stand by Ukraine as it defends its democracy and support its sovereignty and territorial integrity in the face of unprovoked Russian aggression.”

Earlier this month, the president told reporters that he will not instruct Ukraine on what it should do to end the horrific war, warned but negotiations might be necessary.

“From the beginning, I’ve said and I’ve been — not everyone has agreed with me — nothing about Ukraine without Ukraine. It’s their territory. I’m not going to tell them what they should and shouldn’t do,” Biden said. “But it appears to me that, at some point along the line, there’s going to have to be a negotiated settlement here. And what that entails, I don’t know.”