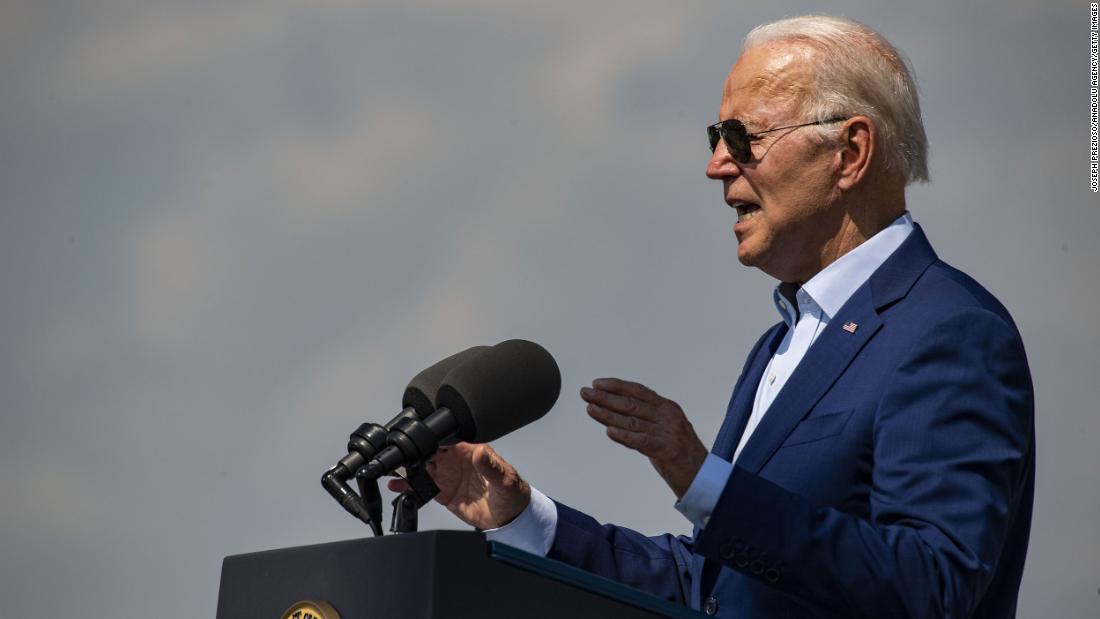 The CHIPS and Science Act will invest more than $200 billion over the next five years in a bid to help the US regain a leading position in semiconductor chip manufacturing. It is aimed at lowering the cost of goods, making the US less reliant on foreign manufacturing and mitigating supply chain disruptions in the wake of the Covid-19 pandemic.

Biden on Tuesday described the law as a “once-in-a-generation investment in America itself.”

“Today America is delivering, delivering, and I honest to God believe that 50, 75, 100 years from now from people who will look back on this week, they’ll know that we met this moment,” Biden said at an event on the White House South Lawn.

The President, who recently emerged from isolation after a rebound case of Covid-19, coughed throughout his speech.

The event was attended by union leaders, industry executives from companies such as HP and Intel, congressional leaders from both sides of the aisle and elected state officials. Senate Majority Leader Chuck Schumer, House Speaker Nancy Pelosi and Secretary of Commerce Gina Raimondo also spoke at the event.

According to the White House, companies this week announced nearly $50 billion in additional investments in American semiconductor manufacturing as a result of the newly passed legislation.

“Micron is announcing a $40 billion investment in memory chip manufacturing, critical for computers and electronic devices, which will create up to 40,000 new jobs” in construction and manufacturing, a White House fact sheet says. “This investment alone will bring the US market share of memory chip production from 2 percent to 10 percent.”

Additionally, Qualcomm and GlobalFoundries are announcing a new partnership that includes $4.2 billion to manufacture chips.

Later on in the day, Biden will sign the ratification of the accession of Sweden and Finland to NATO. The addition of the two traditionally neutral countries to the alliance represented a major foreign policy accomplishment for Biden during a trip to Europe for summits in June.

And on Wednesday, the President will sign the Sergeant First Class Heath Robinson Honoring our Promises to Address Comprehensive Toxics (PACT) Act of 2022 into law. The legislation expands health care benefits for millions of veterans exposed to toxic burn pits during their military service.
The bill widely expands health care resources and benefits to those exposed to burn pits and could provide coverage for up to 3.5 million veterans who qualify. It adds conditions related to burn pit and toxic exposure, including hypertension, to the Department of Veterans Affairs’ list of illnesses that have been caused or exacerbated during military service. Biden has long speculated that burn pits played a role in the cancer that killed his son Beau, in 2015.
The bill signings — along with other related accomplishments like the recent targeted killing of Osama bin Laden’s successor and continued declining gas prices — amount to the possibility that Biden may get the pre-midterms boost Democrats have been hoping for.

With the 2022 midterm elections less than 100 days away, and as Americans have grown discontented through a summer of major economic and political changes, Biden’s political standing among the public has declined.

A CNN poll released in mid-July found that nearly 7 in 10 Americans had said that Biden had not been paying enough attention to the nation’s most pressing problems. The President’s approval rating, in the poll, stood at 38%. And at the end of July, another CNN poll found that 75% of Democratic and Democratic-leaning voters wanted the party to nominate someone other than Biden in the 2024 presidential election.
The events come after the President had been isolating at the White House while dealing with a rebound case of Covid-19. Biden, who is at increased risk for a more severe case of Covid-19 due to his age, was cleared to emerge from isolation on Sunday following a second negative Covid-19 test.

Before the month’s end, Biden could have some other major opportunities to claim political victories.

Biden faces the real prospect of soon signing into law the Inflation Reduction Act — a version of his landmark climate change and health care bill.

The sweeping bill passed in the Senate along party lines and the House is expected to vote on it later this week.

The legislation would represent the largest climate investment in US history and make major changes to health policy by giving Medicare the power for the first time to negotiate the prices of certain prescription drugs and extending expiring health care subsidies for three years. The legislation would reduce the deficit, be paid for through new taxes — including a 15% minimum tax on large corporations and a 1% tax on stock buybacks — and boost the Internal Revenue Service’s ability to collect.

It would raise over $700 billion in government revenue over 10 years and spend over $430 billion to reduce carbon emissions and extend subsidies for health insurance under the Affordable Care Act and use the rest of the new revenue to reduce the deficit.

Before the month’s end, the President will also have to make a decision about whether to extend the nation’s ongoing mass federal student loan forbearance.

The President is also weighing the possibility of canceling some student loans. It’s an issue that’s sharply divided among partisan and generational lines, but one that could act as yet another political boon among some voters as the country continues to grapple with inflation raising the cost of everyday goods and services.