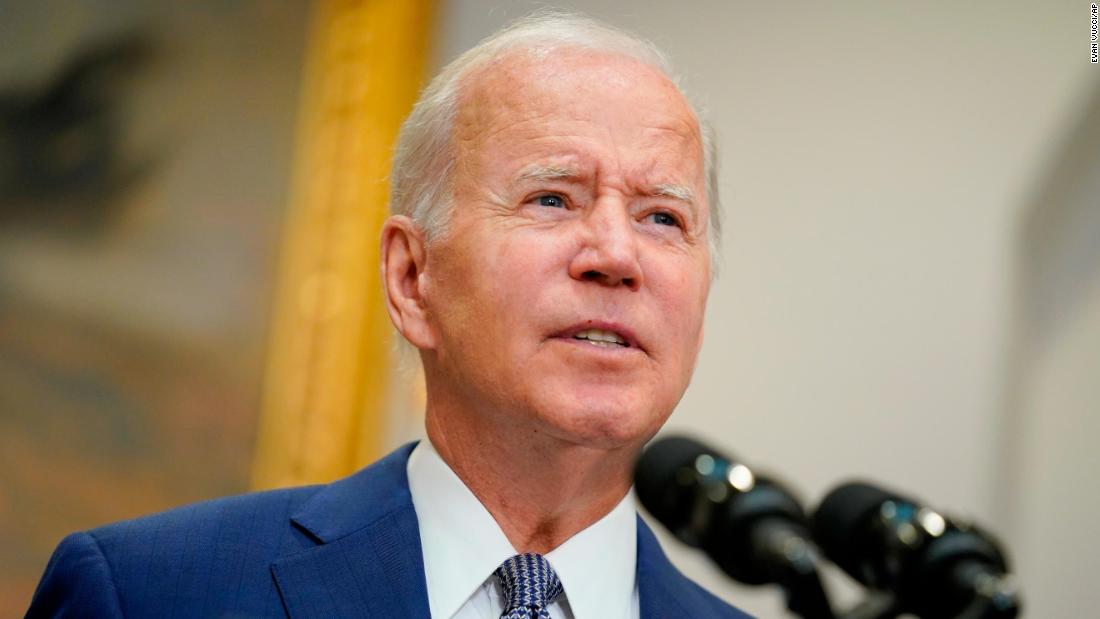 Biden said the package he signed into law represents “an important start,” but more needs to be done to curb the alarming rate of shootings.

The President continued, “That’s what we owe all those families represented here today and all over this country the past many years across our schools, places of worship, workplaces, stores, music festivals, nightclubs and so many other everyday places that have turned into killing fields.”

The President hosted victims of mass shootings from Columbine to Highland Park at a White House event celebrating the federal gun safety legislation he signed into law last month. The new law is the most significant federal legislation to address gun violence since the assault weapons ban of 1994, which expired in 2004.

But the President acknowledged on Monday that the law falls far short of what he and his party had advocated for to stop the alarming frequency of shootings in the US.

“It will not save every life from the epidemic of gun violence, but if this law had been in place years ago, even this last year, lives would have been saved. It matters. It matters. But it’s not enough and we all know that,” the President said.

Biden was interrupted during his remarks by Manuel Oliver, whose son was killed in the 2018 shooting at Marjory Stoneman Douglas High School in Parkland, Florida. Oliver has been critical of the administration’s action on gun violence and has said the new gun safety law doesn’t go far enough.

The President said he has spent so much time with families of shooting victims over the years that he has become “personal friends” with many. He thanked the families for their relentless advocacy to pass more stricter gun measures, “to make sure that other families don’t have to experience the same loss and pain.”

The President said he was determined to ban assault weapons and high-capacity magazines, which face long odds of passing through Congress given Democrats’ razor-thin majorities in both chambers, saying, “I’m not going to stop until we do it. ”

Biden touted the investments the new legislation makes in community violence prevention, including $750 million to help states implement and run crisis intervention programs. The money can be used to implement and manage red flag programs — which through court orders can temporarily prevent individuals in crisis from accessing firearms — and for other crisis intervention programs like mental health courts, drug courts and veterans courts.

It also closes a years-old loophole in domestic violence law, known as the “boyfriend loophole,” which barred individuals who have been convicted of domestic violence crimes against spouses, partners with whom they shared children, or partners with whom they cohabitated, from having guns. Old statutes didn’t include intimate partners who may not live together, be married or share children.

Just before signing the legislation last month, Biden praised the families of gun violence victims with whom he had met. He said their activism in the face of loss had made a difference.

“I especially want to thank the families that Jill and I have (met), many of whom we sat with for hours on end, across the country. There’s so many we’ve gotten to know who’ve lost their soul to an epidemic of gun violence. They’ve lost their child, their husband, their wife,” Biden said.

“Nothing is going to fill that void in their hearts. But they led the way so other families will not have the experience and the pain and trauma they’ve had to live through.”

Titled the Bipartisan Safer Communities Act, the bill had been released by Republican Sens. John Cornyn of Texas and Thom Tillis of North Carolina and Democratic Sens. Chris Murphy of Connecticut and Kyrsten Sinema of Arizona.

It came together in the aftermath of recent mass shootings at a Uvalde, Texas, elementary school and a Buffalo, New York, supermarket that was in a predominantly Black neighborhood.

This story has been updated with additional developments on Monday.