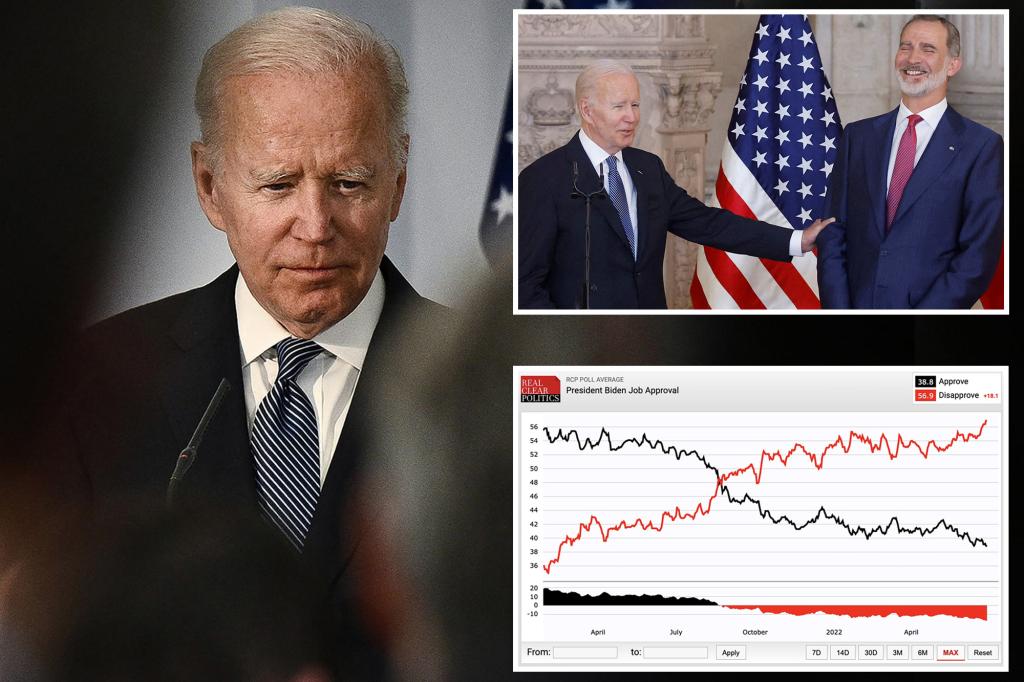 That’s it really kidding though?

President Biden joked Tuesday that he may not return from Spain as his average approval rating hit an all-time low amid the worst inflation since 1981 and record-high gas prices.

Biden made the remark to Spanish King Philip VI in an apparent bid to compliment the beauty of the royal palace in Madrid.

“There’s an old expression in a little town in Delaware called Claymont, Del, a little steel town. And they say, ‘We’re like poor relatives. We show up when we’re invited and we stay longer than we should.’ So be careful. We may not go back,” Biden joked.

At home, Biden’s average approval rating is at a record-low 38.8%, with 56.9% of Americans disapproving of his performance, according to RealClearPolitics. Former President Donald Trump’s approval rating was 43.3% at the same point in his presidency.

Although elected president in 2020 with the most votes in US history, Biden’s popularity plunged during last August’s chaotic Afghanistan withdrawal and has remained low, dragging on Democratic hopes to beat back Republicans in November congressional elections.

Biden, who mistakenly illegally referred to Spanish Prime Minister Pedro Sanchez as the country’s “president” while addressing the king, faces public anger about economic woes as well as disgruntlement a range of other issues including rising violent crime and four-decade-high immigration, according to polls.

A Reuters/Ipsos poll released last week found Biden with just 36% approval overall, with 34% of people rating the economy as their top concern, followed by 10% saying crime and 6% each citing immigration, the environment and inequality.

Biden is attending a meeting of NATO leaders in Madrid to discuss efforts to arm Ukraine to fight off Russia’s more than four-month-old invasion. He arrived in Spain Tuesday after attending the G-7 summit in Germany.