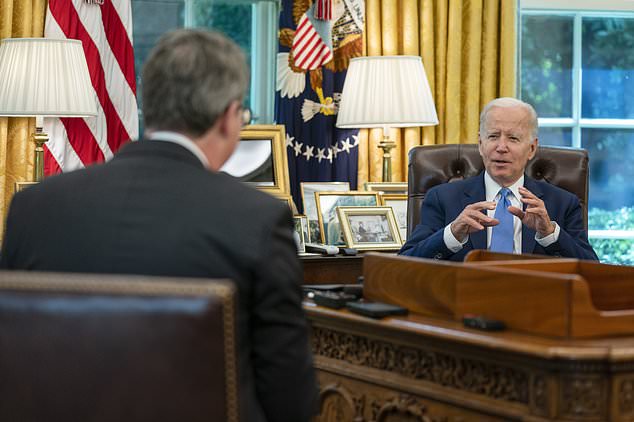 President Joe Biden said the blame for the 41-year high inflation rate could not be placed squarely on him during a sit-down Thursday with The Associated Press.

‘Isn’t it kind of interesting? If it’s my fault, why is it the case in every other major industrial country in the world that inflation is higher? You ask yourself that? I’m not trying to be a wise guy,’ he told AP White House reporter Josh Boak.

Biden pointed out that under his watch the deficit has been reduced and employment has gone up – but the Democratic president acknowledged that Americans are paying vastly more to put food on their table and fuel in their cars and that it was putting a dent in his approval rating. 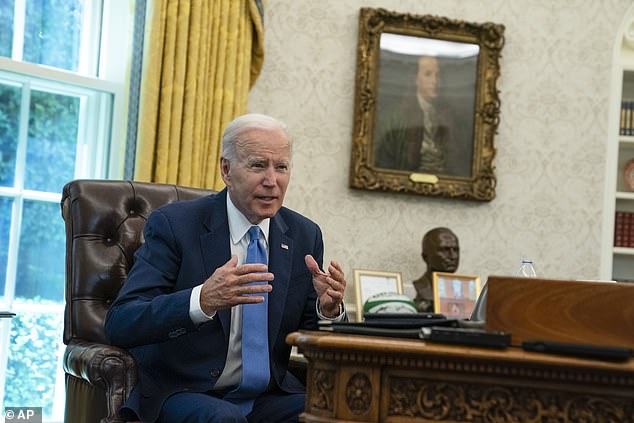 ‘I’m not being a wise guy,’ President Joe Biden said in an Oval Office interview Thursday when asked about inflation 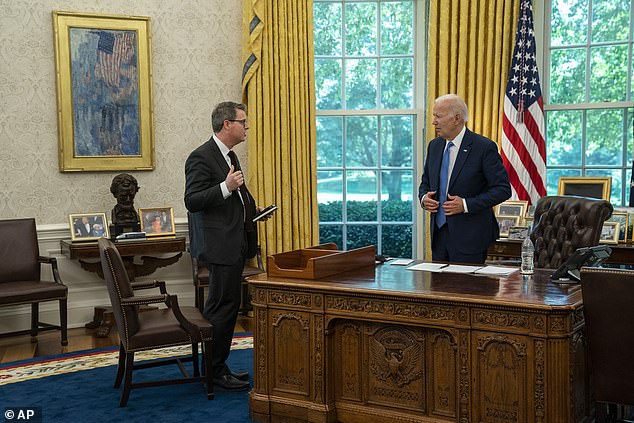 ‘If you want a direct barometer of what people are going to talk about at the kitchen table and the dining room table and whether things are going well, it’s the cost of food and what’s the cost of gasoline at the pump,’ he admitted.

He blamed high gas prices for the nation’s economic pessimism, saying before prices started rising, ‘Things were much more, they were much more optimistic.’

But while Biden said his message to oil companies was ‘Don’t just reward yourselves,’ he has few tools at his disposal to meaningfully bring down prices in the near term.

After more than two years of the COVID-19 pandemic, Biden said the American people are ‘really, really down.’

He emphasized that the need for mental health in America ‘has skyrocketed because people have seen everything upset.’

Biden maintained that he’s optimistic about the country’s future, and that Americans should feel it too – even as the majority of voters say the country is on the wrong track.

‘Be confident, because I am confident we’re better positioned than any country in the world to own the second quarter of the 21st century,’ Biden said. ‘That’s not hyperbole, that’s a fact.’

Still, it wasn’t clear whether Biden’s rhetoric would have a tangible impact on the nation’s glum outlook.

Biden also said he didn’t consider the domestic political impact from US efforts to sanction Russia over its invasion of Ukraine, particularly how it would roil the economy.

Without such action, he said, ‘I fear what would happen next is you´d see chaos in Europe.’ He added: ‘It’s not about my political survival. It´s about what´s best for the country.’

Biden suggested that he’s willing to pay a political price as a result, saying his advice to young people interested in public service is, ‘Unless you know what’s worth losing over, don’t get engaged.’

On the domestic policy front, Biden suggested he still believed a slimmed-down version of the ‘Build Back Better’ bill could pass Congress before the November midterms.

Biden needs all 50 Democrats to support a package in order to get around GOP opposition under the Senate’s budget rules.

‘There’s more than one way to bring down the cost for working folks,’ Biden said. ‘Gasoline may be up to $5 a gallon, but somebody who has a child with stage two diabetes is paying up to 1,000 bucks a month for their insulin. We can reduce it to 35 bucks a month and get it done.’

He added: ‘We have the votes to do it. We’re gonna get that done. I can’t get it all done.’

Biden also suggested there was consensus on providing tax credits for winterizing homes, which would help lower utility bills, and to boost domestic semiconductor manufacturing to address supply chain issues that have driven up prices.

Biden was optimistic about a bipartisan framework to address gun violence by tightening some background check requirements for young firearm purchasers and encouraging states to establish ‘red flag’ laws to keep guns out of the hands of the mentally ill.

As lawmakers draft the legislative text, momentum appears to be building in the Senate after decades of inaction and mass tragedies. Biden acknowledged the progress, albeit limited. 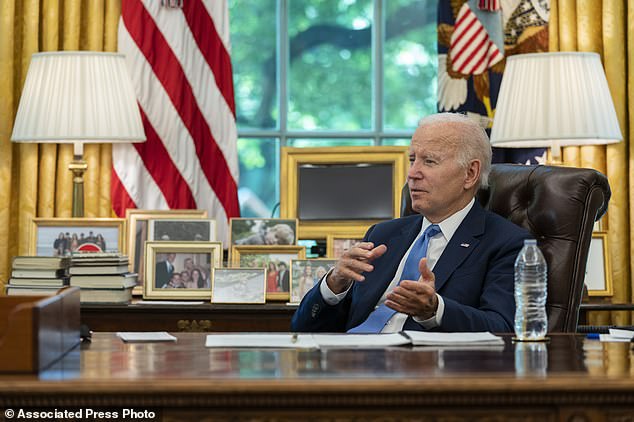 Despite years of political differences, Biden said he still views Senate Minority Leader Mitch McConnell as a Republican he can work with – something he said he considered an endangered species in today’s GOP.

The president said that when he took office, he knew that there ‘were probably, probably 15 sort of traditional, mainstream, conservative Republicans left. And I include in that – and I’m going to get myself in trouble, gonna get him in trouble, probably – the minority leader from Kentucky.’

The president, who has taken to branding other Republicans as ‘ultra-MAGA,’ said examples included Wisconsin Sen. Ron Johnson and Florida Sen. Rick Scott.