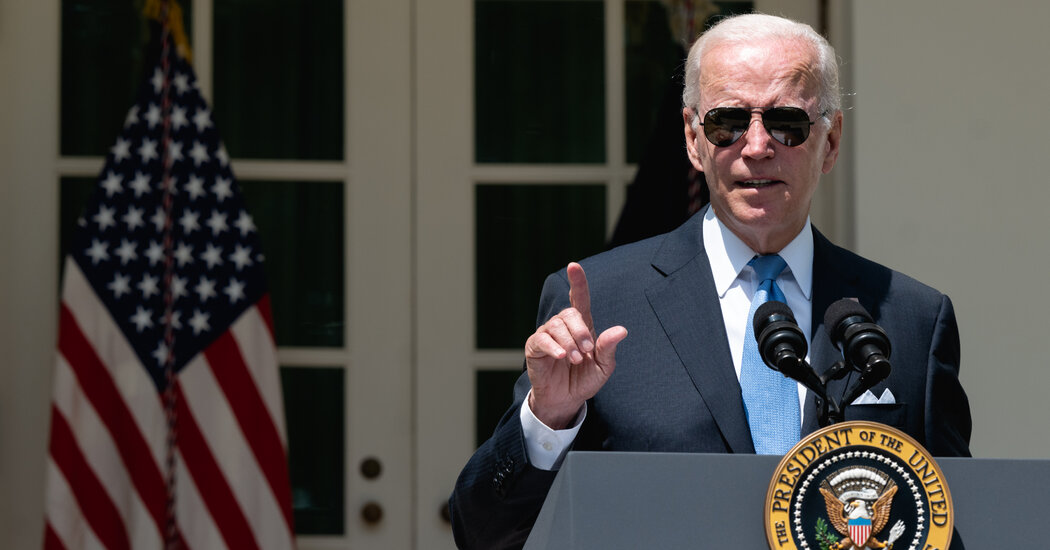 WASHINGTON — President Biden and President Xi Jinping of China confronted each other over Taiwan during a marathon phone call on Thursday, but neither side reported any concrete progress on that longstanding dispute or any of the other issues that have flared between the two powers in recent months .

In their first direct conversation in four months, Mr. Xi sharply warned the United States against intervening in the conflict with Taiwan while Mr. Biden sought to reassure his counterpart that his administration was not seeking to upset the current situation between the two sides and cautioned that neither should either of them.

“President Biden underscored that the United States policy has not changed and that the United States strongly opposes anyone who will change the status quo or undermine peace and stability across the Taiwan Strait,” Karine Jean-Pierre, the White House press secretary, told reporters after the call, which lasted two hours and 17 minutes.

China’s Ministry of Foreign Affairs called it a productive conversation but pushed back against what it considers American provocations without directly mentioning a prospective trip to Taiwan by Speaker Nancy Pelosi that has riled Beijing in recent days.

“Playing with fire will set yourself on fire,” the ministry said in a statement, repeating a metaphor it used in November as well. It said that Mr. Xi told Mr. Biden that China “firmly” opposed “interference by external forces” on Taiwan’s status and that China would “never leave any space for Taiwan independence forces in any form.”

“Public opinion cannot be violated,” the statement added, a reference to China’s position that Taiwan belonged to the government in Beijing. “I hope the US side can see this clearly.”

The call took place as Ms. Pelosi’s possible trip to Taiwan has raised hackles in Beijing, which has made ominous threats of retaliation if she goes through with it. No trip has been officially announced, but Ms. Pelosi has asked other members of Congress to join her next month for what would be the first visit by a House speaker in 25 years to the self-governing island.

The White House has been concerned that the trip would unnecessarily provoke China even as the United States and Europe are consumed with helping Ukraine fight off Russian invaders. Mr. Biden publicly said that the military thought it would be a bad time for Ms. Pelosi to go. And while officially White House officials say it is up to the speaker to decide her own schedule, the unspoken message interpreted on Capitol Hill has been pressure on her to postpone or cancel.

Tensions have been high in the region for months as China has refused to join the American-led effort to isolate Russia, made assertive claims of control over the Taiwan Strait and engaged in several close midair encounters with American, Canadian and Australian aircraft. The war in Ukraine is being watched carefully for implications for Taiwan, another small neighbor coveted by a large and aggressive power.

Mr. Biden vowed in May to use force to defend Taiwan if it is attacked as Ukraine was, the third time he has said so during his brief presidency, even though he and aids later insisted that he was not changing the longstanding American policy of “strategic ambiguity” ” over how it would respond in such a circumstance. The president’s language at the time heartened Taiwan and American hawks even as it drew condemnation in Beijing. His language on Thursday seemed aimed at diminishing the impression that he was taking a more assertive stand than past presidents.

Read More on the Relations Between Asia and the US

China’s aggressive behavior internationally comes as Mr. Xi faces significant troubles at home before a critical November party congress in which he is expected to be confirmed for a third term. China’s “zero Covid” lockdown policies have been deeply unpopular, and the economy has slowed considerably, as youth unemployment is on the rise and mortgage and debt crises are afflicting some regions. Analysts said he wants to show that he can stand up to the United States heading into the congress.

In the lead-up to the Thursday call, Beijing issued louder than usual statements about Ms. Pelosi’s planned trip, implying that China might use military force if the speaker went ahead with her plans. The United States would “bear the consequences” if Ms. Pelosi traveled to Taiwan, a spokesman at the Ministry of Foreign Affairs, Zhao Lijian, said this week.

The strong rhetoric was intended to dissuade Ms. Pelosi from making the trip, but it did not mean China would use force, said Shi Yinhong, a professor of international relations at Renmin University in Beijing. “The Chinese have made clear they want Pelosi’s visit cancelled, but Beijing surely does not want military conflict right now,” he said.

But the atmosphere was “remarkably worse” than in March, when the two leaders last spoke on a call, he added.

In the region, the USS Ronald Reagan carrier group left Singapore on Tuesday and headed north into the South China Sea, in the direction of the Taiwan Strait, which could increase pressure between the two nations.

A spokeswoman for the Seventh Fleet, Cmdr. Hayley Sims, described the movement as the carrier’s “continuing normal, scheduled operations as part of her routine patrol in support of a free and open Indo-Pacific.” She declined to say if or when the carrier would reach the vicinity of Taiwan.

China has supported Russia’s war in Ukraine, buying large amounts of Russian oil and blaming the conflict on NATO’s expansion into Eastern Europe. The Chinese statement issued after Thursday’s call said the leaders “exchanged views” on Ukraine, referring to the war there as a “crisis,” a nod to China’s basic support of Russia that Mr. Biden has often been criticized.

American officials said the two presidents also discussed American tariffs imposed on China by former President Donald J. Trump and that Mr. Biden is considering lifting them, but no agreement was reached during the call.

China seemed sensitive to the industrial bill passed by Congress on Thursday to boost the American semiconductor industry and reduce reliance on China and other foreign manufacturers. “Attempts at decoupling or severe supply chains in defiance of underlying laws would not help boost the US economy,” the Chinese statement said. “They would only make the world economy more vulnerable.”

Ms. Pelosi’s possible visit to Taiwan in early August comes at a particularly sensitive time for the Chinese military. The Communist leader, Mao Zedong, founded the People’s Liberation Army on Aug. 1, 1927, a date that is one of the most important in the army’s calendar.

An integral part of China’s military training is how to stage a future takeover of Taiwan, an island of 23 million people that China claims as its own and has vowed to conquer if necessary.

Ms. Pelosi would travel on a military plane if she makes the trip, as is traditional. One question raised by her planned visit was whether the Chinese air force would attempt to escort Ms. Pelosi’s aircraft, or interfere with it in any way, as it approached Taiwan.

The mood and outcome of the call could influence whether Mr. Biden and Mr. Xi meet in person later in the year in what would be their first in-person encounter since Mr. Biden became president, said Yun Sun, director of the China program at the Stimson Center in Washington.

The two men have known each other since 2011, when they were both vice presidents, and met in China on a “getting to know you” trip by Mr. Biden. They are both likely to attend the Asia-Pacific Economic Cooperation summit, known as APEC, in Bangkok in November.

Peter Baker reported from Washington, and Jane Perlez from Seoul. read you contributed research from Shanghai.