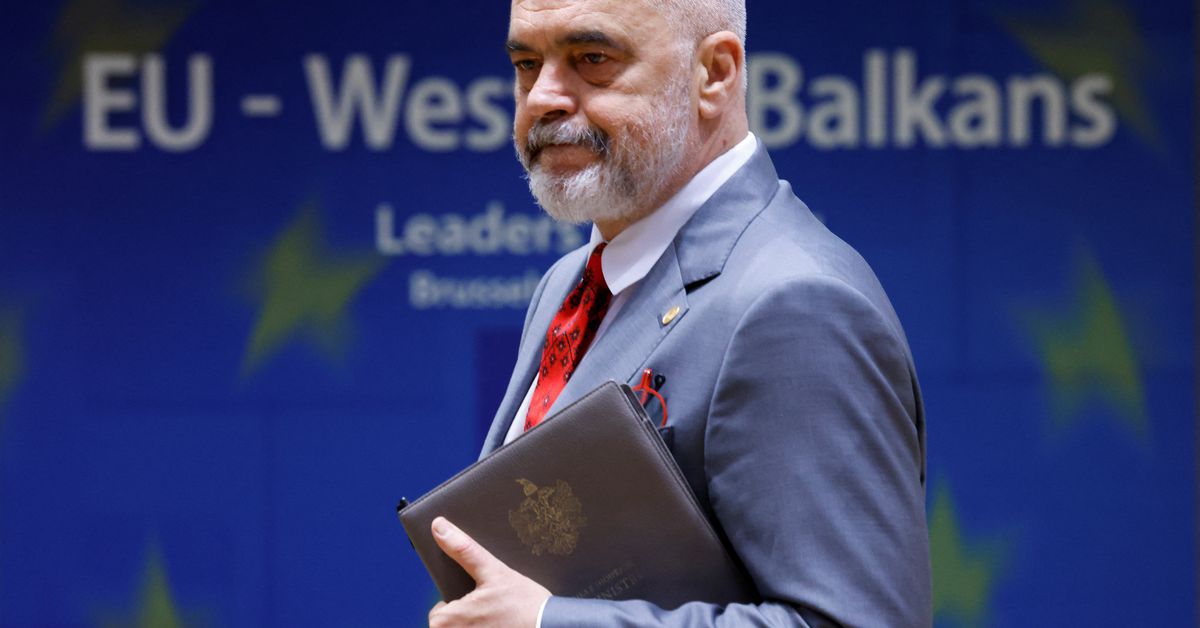 BRUSSELS, June 23 (Reuters) – The summit of European Union and Balkan leaders failed on Thursday to break a deadlock over a stalled EU membership bid by North Macedonia and Albania, even as Ukraine was set to become an official candidate for membership.

Separate from the Ukraine decision later on Thursday, the leaders of the six Balkan countries of Albania, Bosnia, Kosovo, Montenegro, North Macedonia and Serbia expressed disillusion that negotiations have not started or are stalled, years after being promised an eventual EU membership.

“What has happened is a serious blow to the credibility (of) the European Union,” Dimitar Kovacevski, North Macedonia’s prime minister, told a news conference following the Balkan-EU summit, referring to the lack of progress.

At the summit, the EU restated its promise made almost two decades ago to give the Balkan countries membership once they enacted deep economic, judicial and political reforms.

“The meeting clearly and unequivocally reiterated the European perspective of the Western Balkans and the region’s future in the European Union,” an EU official said.

But EU member Bulgaria’s veto has remained in place since 2020, when it blocked accession talks with North Macedonia over a dispute relating to history and language. Albania is also being held back because the EU has linked its progress to that of North Macedonia.

Albanian Prime Minister Edi Rama said that he was a “disgrace” and also accused EU leaders of “impotence” for failing to pressure Sofia into making concessions.

“It’s a disgrace that a NATO country, Bulgaria, kidnaps two other NATO countries, namely Albania and North Macedonia, in the midst of a hot war in Europe’s backyard with 26 other EU countries sitting still in a scary show of impotence,” Rama told reporters, referring to Russia’s invasion of Ukraine.

Rama, who briefly considered not attending the summit, said he made his position clear to leaders in their closed-door session on Thursday. However, the collapse of the Bulgarian government coalition on Wednesday meant there was no possibility of a breakthrough in Brussels. read more

Such EU decisions require unanimity among the 27 states.

“Even a pandemic … a threatening war has been unable to unite them,” Rama said of the EU leaders’ disunity, referring to the Ukraine war.

However, Bulgarian Prime Minister Kiril Petkov, who represented his country soon despite losing a confidence vote on Wednesday, said he hoped for support for North Macedonia in the Bulgarian parliament soon, without giving more details.

Dutch Prime Minister Mark Rutte also said there could be a resolution to the issue next week, referring to hopes that Bulgaria’s parliament would reconvene to support lifting the veto on North Macedonia.

Balkan citizens have long dreamed of joining the EU after the ethnic wars of the 1990s, as Yugoslavia disintegrated.

But northern countries such as France and the Netherlands have stalled the EU’s “enlargement” process, fearing a repeat of the accession of Romania and Bulgaria in 2007 and the poorly managed migration of eastern European workers to Britain that turned many Britons against the EU.