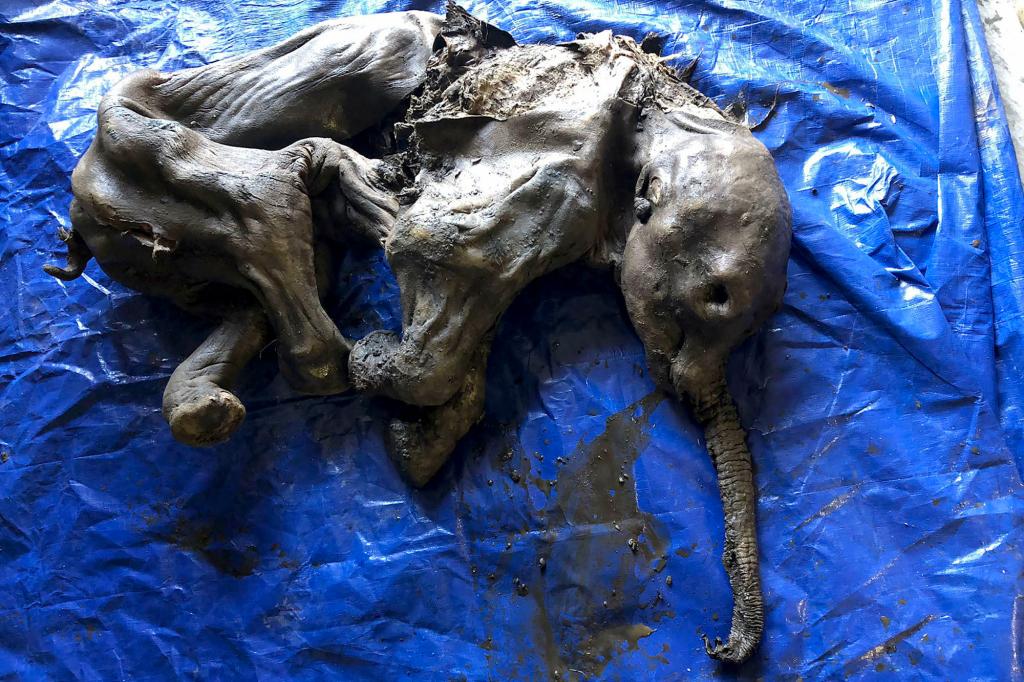 A miner in Canada went looking for gold and found something even rarer – a mummified baby woolly mammoth.

The tiny creature has been named Nun cho ga, which means “big baby animal” in the Hän language, according to the Yukon government.

In creepy-looking pictures released by scientists who helped to recover Nun cho ga, her skin and hair are seen to still be attached – meaning that she was almost perfectly preserved.

Nun cho ga died and was frozen in permafrost at least 30,000 years ago. While she was alive, she would have roamed Canada during the ice age.

Paleontologist Dr. Grant Zazula told The Weather Channel that the baby woolly mammoth was found with grass in her intestines.

Zazula believes that the mammoth, just a little over four and a half feet long, most likely died after getting stuck in the mud.

The paleontologist estimates that Nun cho ga was probably about 30 to 35 days old when she died.

“As an ice age paleontologist, it has been one of my lifelong dreams to come face to face with a real woolly mammoth,” Zazula said.

“That dream came true today. Nun cho ga is beautiful and one of the most incredible mummified ice age animals ever discovered in the world. I am excited to get to know her more.”

Zazula is not alone in his excitement, as other members of the Yukon community have been blown away by the remarkable discovery.

“There will be one thing that stands out in a person’s entire life and I can guarantee you this is my one thing,” Treadstone Mining’s Brian McCaughan said.

Moving forward, the Yukon government plans to work together with the Trʼondëk Hwëchʼin community to preserve and study the mummified creature.

“We look forward to collaborating with the Yukon government on the next steps in the process for moving forward with these remains in a way that honors our traditions, culture, and laws,” said Tr’ondëk Hwëch’in Chief Roberta Joseph.

“We are thankful for the Elders who have been guiding us so far and the name they provided.

“We are committed to respectfully handling Nun cho ga as she has chosen now to reveal herself to all of us.”

This story originally appeared on The Sun and was reproduced here with permission.