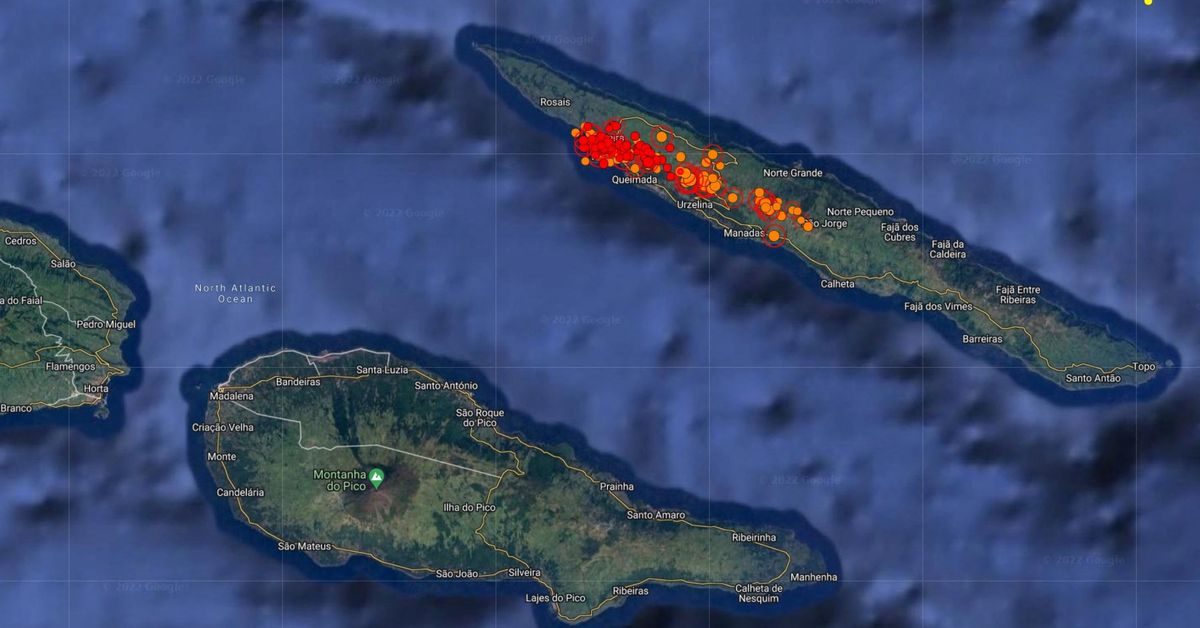 LISBON, March 22 (Reuters) – A series of multiple small earthquakes that have been rattling a mid-Atlantic Portuguese island for three days could trigger a stronger tremor or a volcanic eruption .

The number of earthquakes recorded on the volcanic island of Sao Jorge, in the Azores archipelago, since Saturday afternoon has increased to around 1,800 from an earlier figure of 1,329, said Rui Marques, head of the region’s CIVISA seismo-volcanic surveillance centre.

Only 94 of the 1,800 earthquakes, with a magnitude of between 1.7 to 3.3, registered so far have been felt by the population, Marques told Lusa news agency.

Sao Jorge, one of nine islands which make up the Azores, is home to around 8,400 people and is part of the archipelago’s central group, which includes the popular tourist destinations of Faial and Pico, which are also volcanic.

The series of small quakes, known as a swarm and which have caused no damage so far, were reported along the island’s volcanic fissure of Manadas, which last erupted in 1808.

“All scenarios are on the table,” Marques told Antena 1 radio station. “On one hand, we could see an earthquake of greater magnitude that can cause some destruction. … On the other hand, we have the scenario of an eruption.”

Marques urged inhabitants to remain vigilant, although he said the earthquakes were of tectonic origin, referring to movement of the Earth’s tectonic plates, rather than volcanic.

“We should not treat this as a purely tectonic crisis but as a seismic crisis that is taking place in an active volcanic system,” Marques said.

The Civil Protection authority said earlier on Tuesday it was working with other entities to prepare a response in case a big earthquake or eruption took place.

In a separate statement on Tuesday evening, it advised people to avoid all but essential travel to the lush green island to ensure authorities face no “additional constraints” if they need to help the local population.

The sudden increase in seismic activity is reminiscent of the earthquake swarms detected prior to the eruption of the Cumbre Vieja volcano on Spain’s La Palma island last year, adding 1,400 km (870 miles) southeast of the Azores. read more