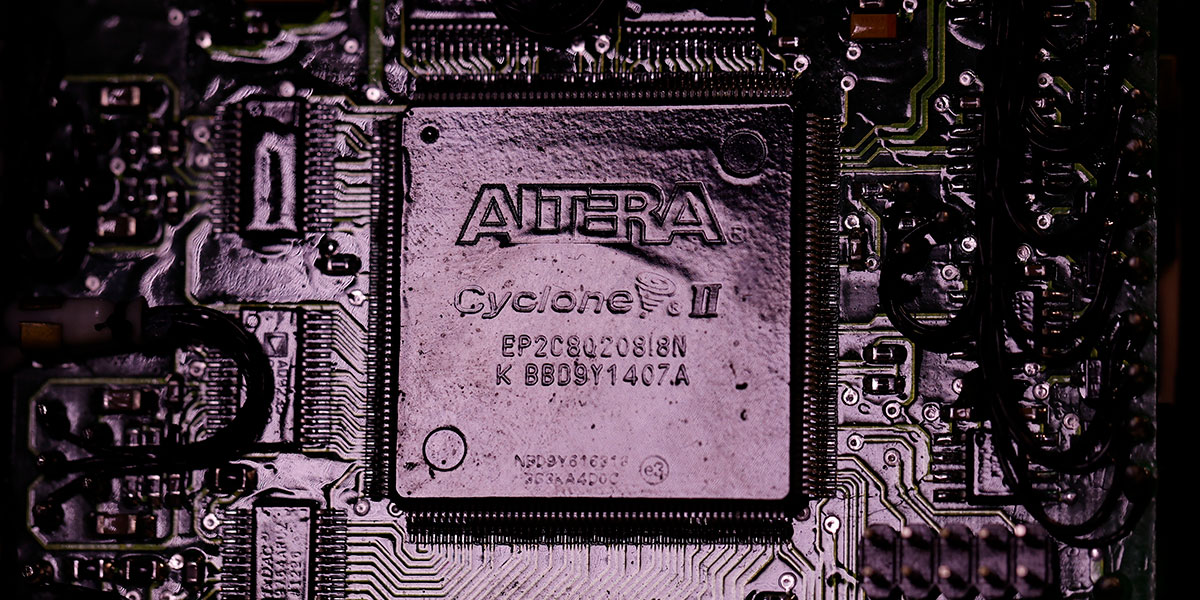 With the tip of a hunting knife, a senior Ukrainian security official removed 18 screws and lifted off the handle of a small black metal box. Inside were four sliding panels packed with scores of computer chips.

This was the electronic brain of an unexploded Russian 9M727 cruise missile — one of the devastating weapons Russia has used to strike Ukraine since it invaded the country on Feb. 24. Russian troops have fired more than 3,650 missiles and guided rockets in the first five months of the war, according to Ukrainian authorities, destroying military targets as well as apartment buildings, shopping centers, and killing hundreds of civilians. On July 14, three cruise missiles struck the city of Vinnytsia, killing 27 people, including a four-year-old girl, Ukrainian authorities say. Russia says it only fires at military targets.

The black metal box, as well as other Russian weaponry shown to Reuters, were collected on the battlefield by Ukraine’s military. They contain Russian electronics bearing Cyrillic markings, sometimes handwritten.

But many of the most important electronic components inside are microcontrollers, programmable chips and signal processors stamped with the names of American chip-makers, including Texas Instruments Inc; Altera, owned by Intel Corp; Xilinx, owned by Advanced Micro Devices Inc (AMD); and Maxim Integrated Products Inc, acquired last year by Analog Devices Inc. Chips made by Cypress Semiconductor, now owned by Germany’s Infineon AG, were also visible.

“It’s quite simple,” said the senior Ukrainian official, who requested anonymity for security reasons. “Without those US chips, Russian missiles and most Russian weapons would not work.”

The Western components in the Russian weapons were examined as part of an investigation by Reuters in collaboration with the Royal United Services Institute (RUSI), a London-based defense think tank, and iStories, a Russia-focused investigative news site.

While some of the more sophisticated Western chips in the Russian weapons have been subject to special export licensing requirements for years, the investigation found that many of the armaments also contain run-of-the-mill computer chips and other components found in consumer products. These are easily obtainable and in many cases are not subject to export restrictions.

After the invasion, the United States and other countries banned high-tech exports to Russia to try to cripple its defense industry and tech companies announced that they had halted all exports to Russia. Yet the reporting team found that the flow of Western brand-name computer parts to Russia hasn’t stopped, with thousands of shipments since the invasion of Ukraine. The shippers were mainly unauthorized suppliers, but they also included some manufacturers.

Reuters provided to AMD, Analog Devices, Infineon, Intel and Texas Instruments data from Russian customs records on shipments of their products to Russia that arrived after the invasion.

Three of the manufacturers – AMD, Analog Devices and Infineon – said they had launched internal investigations after Reuters provided the customs data showing thousands of recent shipments of their products to Russia by third-party sellers. Infineon and Texas Instruments said products that they had shipped were already in transit at the time of the invasion. Intel said goods it shipped were internal company deliveries before it ceased its Russian operations in early April.

Asked about their chips’ use in Russian weapons systems, the companies said they comply with export controls and trade sanctions. Infineon said it was “deeply concerned should our products be used for purposes for which they were not designed.” Intel said it “does not support or tolerate our products being used to violate human rights.”

Russia’s reliance on Western electronics for its weapon systems has been known for years. Moscow has a long history of acquiring smuggled military-grade from the United States, including costly specialized chips for satellites that can withstand radiation in space. On the day of the invasion, the White House announced that the United States and its allies were imposing “Russia-wide restrictions on semiconductors, telecommunication, encryption security, lasers, sensors, navigation, avionics and maritime technologies” that it said would “cut off Russia’s access to cutting edge technology.” Many non-military tech products, however, remain exempt.

Russia defines the conflict as a special military operation meant to disarm Ukraine. Moscow has cast the sanctions as a hostile act and has denied targeting civilians.

A spokesman for the US Department of Commerce, which administers export restrictions, said, “The powerful export controls put in place by the US and 37 allies and partners are severely impacting Russia’s access to items and technologies it needs to sustain its military aggression, including semiconductors. As time goes on and their stockpiles continue to diminish, our controls will bite even harder.”

“We will remain vigilant and engaged with our allies and partners in enforcing our controls,” he said.

The onboard computer system inside the cruise missile’s black metal box shows that Russia doesn’t just rely on state-of-the-art technology for its precision weaponry. For example, stamps on two of the Texas Instruments chips – which process digital signals – showed they were manufactured more than 30 years ago.

“For the most part, it’s the same chips that you find in your car or your microwave,” said a Ukrainian weapons expert with access to recovered Russian military gear.

Gehan Amaratunga, professor of electrical engineering at the University of Cambridge, reviewed a list of more than 600 Western components compiled by RUSI and Reuters that were found in Russian weapons and military systems recovered in Ukraine. “They are mostly standard products which are dated and can be found in many industrial electronic systems,” he said. “As such, they are not specialist military specification products.”

Still, he added, “it is the reality that all standard integrated circuits can be used for both civilian and military purposes.”

“Attention! We are working normally. Our warehouses are ready to supply equipment to customers from the Russian Federation despite EU and US sanctions.”

Despite what the West has described as an unprecedented series of strict sanctions against Russia, many commodity electronic components are still not subject to export controls. And even if they are, there’s a global galaxy of suppliers and traders in East Asia and other countries that are willing to ship them and are often beyond the control of Western manufacturers.

A review by Reuters of Russian customs records identified more than 15,000 shipments of Western electronic components that reached Russia after its Feb. 24 invasion of Ukraine through the end of May. The manufacturers included AMD, Analog Devices, Infineon, Intel and Texas Instruments.

The parts included microprocessors, programmable chips, storage devices and other items, according to the Russian customs data.

Russia itself has made no secret of its desire to continue the flow of imported Western tech products. In June, President Vladimir Putin signed a law to permit Russian companies to import electrical goods and their components without the patent owners’ permission.

One Moscow-based computer retailer, Kvantech, now proclaims at the top of its website in Russian: “Attention! We are working normally. Our warehouses are ready to supply equipment to customers from the Russian Federation despite EU and US sanctions.”

The US Department of Commerce declined to comment. The EU didn’t respond to a request for comment.

The Russian website features the logos of more than a half-dozen top US technology companies. Asked how Kvantech manages to continue looking for Western computer equipment, an official company that gave his name only as Viktor said it was “a commercial secret.”

Reuters obtained the Russian customs records from three commercial providers, including one that had 2022 data. To verify the most recent data, the news agency cross-checked a sample of that provider’s earlier records – including the date, buyer, seller, international product code and other information – with the two other sources and found that they matched.

Andre Tauber, a spokesman for Infineon, said the German company had launched an internal investigation based on Reuters findings, which identified more than 450 shipments to Russia between Feb. 25 and May 30 of products made by Infineon-owned Cypress Semiconductor. Reuters also found nearly 2,500 shipments of Infineon products that arrived in Russia after the invasion.

“We are in the process of reviewing and verifying the information you provided and will take appropriate actions as needed,” Tauber said. “Infineon takes this matter very seriously.”

He added that “Infineon instructed all distribution partners globally to prevent deliveries of Infineon products or services contrary to the sanctions and their spirit.” He said, “Compliance with applicable laws is of utmost importance for Infineon, and we have established robust policies and processes to comply with these laws. It proves difficult to control ongoing sales throughout the entire supply chain.”

A spokesperson for AMD said the firm is investigating Russian customs data shared by Reuters showing that between March 2 and May 31, there were about 200 shipments of AMD components and nearly 700 shipments of Xilinx components to Russia.

“The information shared is concerning,” a spokesperson said. While the company has “not seen any diversion of AMD products into Russia … AMD takes these matters very seriously and we have commenced a thorough review of the data to identify potential issues.”

Reuters shared with Analog Devices Russian customs data showing that since the invasion, there have been more than 7,700 shipments to Russia of its components through the end of May. There have also been nearly 900 shipments of parts made by Maxim Integrated, which Analog Devices owns, the data shown.