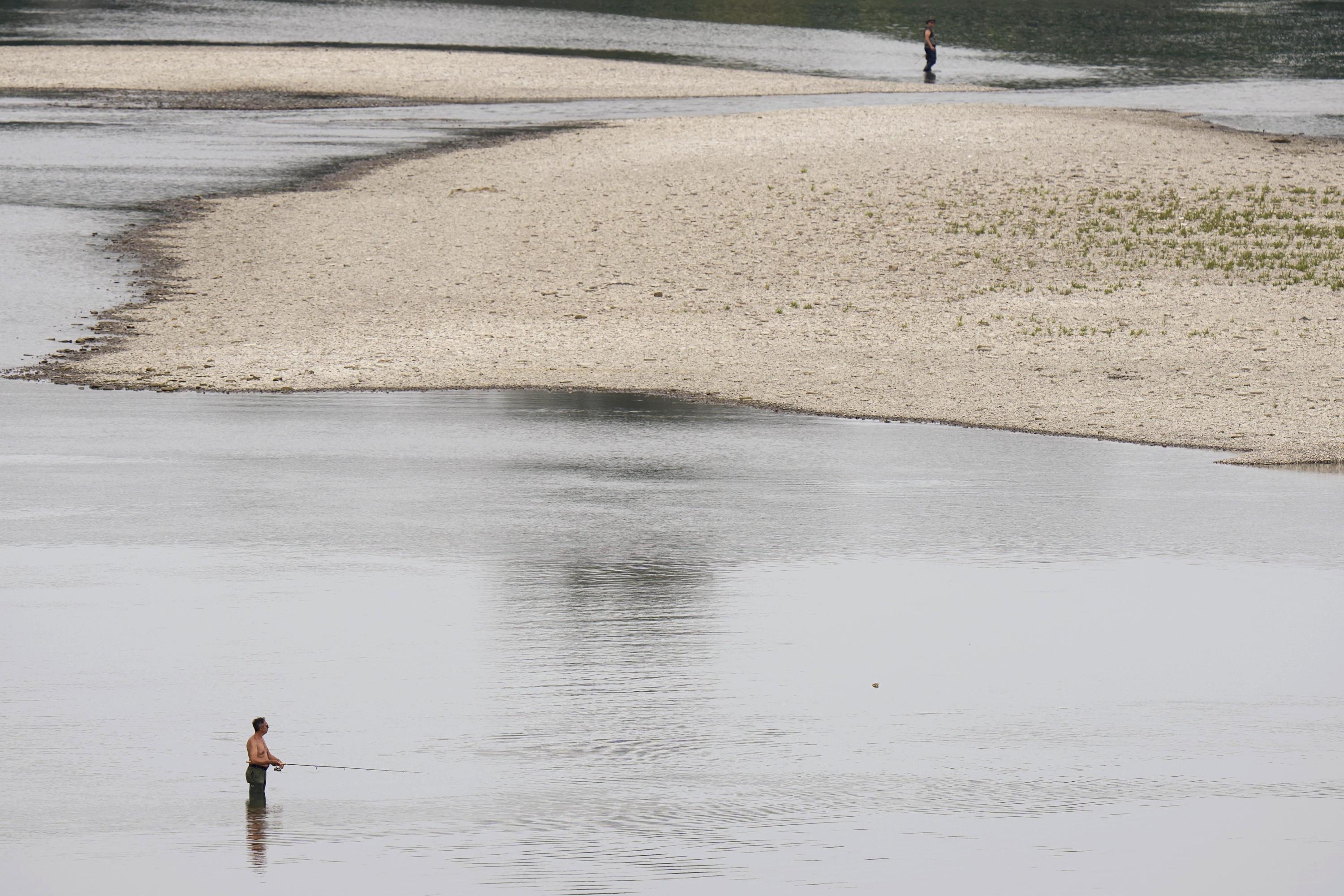 BORETTO, Italy (AP) — Water is so low in large stretches of Italy’s largest river that local residents are walking through the middle of the expanse of sand and shipwrecks are resurfacing.

Authorities fear that if it doesn’t rain soon, there’ll be a serious shortage of water for drinking and irrigation for farmers and local populations across the whole of northern Italy.

In a park near the central northern village of Gualtieri, cyclists and hikers stop in curiosity to observe the Zibello, a 50-meter long (164 feet) barge that transported wood during the second world war but sank in 1943. It is normally covered by the Po’s waters.

“It’s the first time that we can see this barge,” said amateur cyclist Raffaele Vezzali as he got off the pedals to stare at the rusted ship. Vezzali was only partially surprised, though, as he knew that the lack of winter rain caused the river to reach record low levels.

But the curiosities of a resurfaced wartime boat and wide sandy beaches of the little to mask the disruption this will cause for local residents and farmers.

The drying up of the Po, which runs 652 kilometers (405 miles) from the northwestern city of Turin to Venice, is jeopardizing drinking water in Italy’s densely populated and highly industrialized districts and threatening irrigation in the most intensively farmed part of the country, known as the Italian food valley.

Northern Italy hasn’t seen rainfall for more than 110 days and this year’s snowfall is down by 70%. Aquifers, which hold groundwater, are depleted. Temperatures of 2 degrees Celsius (3.6 degrees Fahrenheit) above season average are melting the tiny snowfields and glaciers that were left on the top of the surrounding Alps, leaving the Po basin without its summer water reservoirs.

All these factors are triggering the worst drought in 70 years, according to the Po River Basin Authority.

“We are in a situation where the river flow is approximately 300 cubic meters (80,000 gallons) per second here in (the riverside village of) Boretto, while normally in this area we have almost 1800 (cubic meters, 476,000 gallons),” explained Meuccio Berselli, secretary general of the Po River Basin Authority.

The authority is constantly monitoring the river flow but there is very little hope that weather will help. The downpours that occurred in the month of June were extreme but highly localized and weren’t absorbed by the land and didn’t reach the Po and its aquifers.

Berselli is frantically working on a resiliency plan to guarantee drinking and irrigation water to millions of households and to the Po valley farmers, who produce 40% of Italian food. Parmesan cheese, wheat, and high-quality tomatoes, rice and renowned grapes grow in huge quantities in the area.

The resilience plan includes higher draining from Alpine lakes, less water for hydroelectric plants and rationing of water in the upstream regions.

The Po drought comes at a time when farmers are already pushing both irrigation and watering systems to their maximum to counter the effect of high temperatures and hot winds.

Martina Codeluppi, a 27-year-old farmer from the tiny rural town of Guastalla, says her fields are entirely irrigated with the water coming from the Po and are already suffering due to the lack of winter and spring rain. She said she’s expecting a “disastrous year.”

“With such high temperatures… with no rain, and it seems that there won’t be rain in the coming days, the situation is catastrophic,” said Codeluppi, as she walked through her family’s fields. She’s proudly growing pumpkins, watermelons, wheat, and grapes on farmland passed down through the family, but she’s extremely concerned about what this year’s harvests will yield.

“We believe that there will be a drop in this wheat productivity by at least 20% or more due to the lack of rain and irrigation,” she said. The Italian farmers confederation estimates that wheat yields could drop by 20% to 40% this year. Wheat is a particular concern for farmers as it’s completely reliant on rain and doesn’t get irrigated.

The irrigation system is also at risk. Usually, river water is lifted with diesel fueled electric pumps to upper basins and then flows down into the vast fields of the valley through hundreds of waterways. But now, pumps are at risk of failing to draw water and excavators are frantically working to constantly dredge dedicated waterways to ensure the water necessary for irrigation.

The water shortage won’t just hamper food production, but energy generation, too. If the Po dries up, numerous hydroelectric power plants will be brought to a halt, at a time where the war in Ukraine has already hiked up energy prices across Europe.

According to a state-owned energy service system operator, 55% of the renewable energy coming from hydroelectric plants in Italy comes from the Po and its tributaries. Experts fear that a lack of hydroelectric power will contribute to increased carbon dioxide emissions, as more electricity will have to be produced with natural gas.

“On the top of the critical situation we are creating an additional damaging situation,” said the Po river authority’s Berselli about the likely emergence of greenhouse gas emissions.