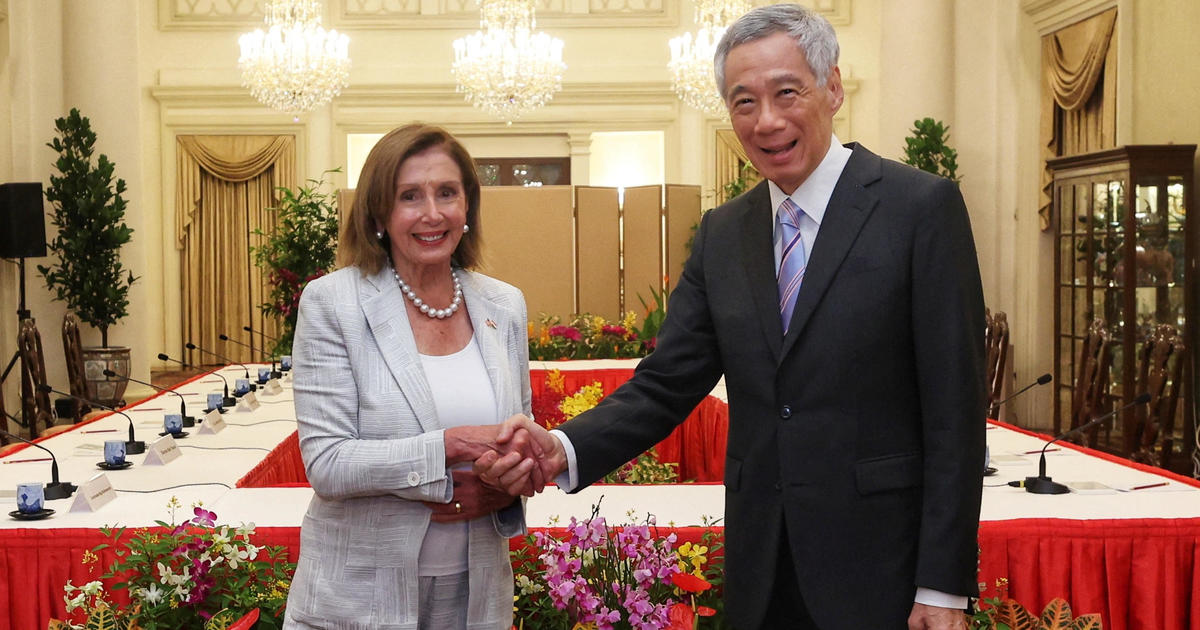 House Speaker Nancy Pelosi kicked off an Asia tour Monday that’s been shrouded in secrecy following an escalation in tensions with China over Taiwan.

With no word on whether Pelosi will visit the island, she stopped first in Singapore, where Prime Minister Lee Hsien Loong urged her at a meeting to strive for “stable” ties with Beijing.

Her itinerary includes Malaysia, South Korea and Japan, but a possible Taiwan visit has also dominated attention in the run-up.

Reports about a plan to visit the island have enraged Beijing and caused unease in the White Housewith President Biden trying to lower the temperature between Washington and Beijing.

Beijing considers self-ruled Taiwan its territory — to be seized one day, by force if necessary — and says it would regard Pelosi as a major provocation.

The Reuters news agency quotes Chinese foreign ministry spokesman Zhao Lijian as saying Monday it would be “a gross interference in China’s internal affairs” if Pelosi were to stop in Taiwan. He warned it would result in “very serious developments and consequences.”

“We would like to tell the United States once again that China is standing by, the Chinese People’s Liberation Army will never sit idly by, and China will take resolute responses and strong countermeasures to defend its sovereignty and territorial integrity,” Zhao told a regular daily briefing.

Pelosi’s office confirmed her Asia trip in a statement Sunday once her plane was in the air, following days of US media speculation and the speaker refusing to confirm her itinerary.

“The trip will focus on mutual security, economic partnership and democratic governance in the Indo-Pacific region,” her office said, referring to the Asia-Pacific.

The statement didn’t mention Taiwan. But visits by US officials there are usually kept secret until delegations land.

A spokesperson for the White House National Security Council said Monday morning that Pelosi “has not confirmed her travel plans,” adding that the national security team has engaged with Pelosi and her team and has given her “thorough briefings.”

Pelosi, the spokesperson said, “will make her own decision because Congress is an independent branch of government.”

Taiwan has been visited by a House speaker before — Newt Gingrich went to Taiwan in 1997. “There is no reason for Beijing to turn a potential visit consistent with longstanding US policy into some sort of crisis or conflict,” the spokesperson said.

The Global Times, China’s state-run tabloid, suggested Pelosi might use “emergency excuses like an aircraft fault or refueling” to land at a Taiwanese airport.

“If she dares to stop in Taiwan, it will be the moment to ignite the powder keg of the situation in the Taiwan Straits,” Hu Xijin, a former Global Times editor who’s now commentator, tweeted.

Taiwan’s 23 million people have long lived with the possibility of an invasion, but the threat has intensified under Chinese President Xi Jinping.

The United States maintains a policy of “strategic ambiguity” over whether it would militarily intervene were China to invade.

While Washington diplomatically recognizes Beijing over Taipei, it also backs Taiwan’s democratic government and opposes any forced change to the island’s status.

American officials often make discreet visits to Taiwan to show support, but Pelosi trip would be higher-profile than any in recent history.

Taiwan’s government has remained silent on the prospect of a Pelosi visit and there’s been minimal local press coverage.

“I really hate what the Chinese are doing,” Hsu Ching-feng, a fruit vendor in Taipei, told Agence France-Presse. “But there’s nothing us common folks can do about it but ignore them. I will just ignore them.”

As House speaker, Pelosi is third in line to the US presidency and one of the country’s most powerful politicians.

Mr. Biden and Xi had a tense phone call last week clouded by disagreements over Taiwan.

Xi issued an oblique warning to the United States not to “play with fire” over the island.

Speculation about Pelosi’s Taiwan plans has coincided with an uptick in military activity across the region.

US officials have sought to downplay the significance of a Pelosi visit, urging calm from Chinese leaders.

Kharis Templeman, a Taiwan expert at the Hoover Institution, said Beijing “misread US politics and screwed their signaling up” with its intense reaction.

“They picked the wrong target. Biden doesn’t control the Speaker or any other member of Congress,” he tweeted Sunday.

“They’ve drawn the line at the Speaker of the House, on a visit rich in symbolism but of limited practical value. And now it will be politically costly for either Pelosi not to go, or Xi not to respond with something dramatic.”

In Taiwan, there have been mixed views about the prospect of Pelosi visiting, but figures from both the ruling party and the main opposition have said the island should not cave to Chinese pressure.

“If Pelosi were to cancel or postpone the trip, it would be a victory for the Chinese government and for Xi as it would show that the pressure it has exerted has achieved some desired effects,” Hung Chin-fu, from Taiwan’s National Cheng Kung University, told AFP.

Sara Cook contributed to this report.