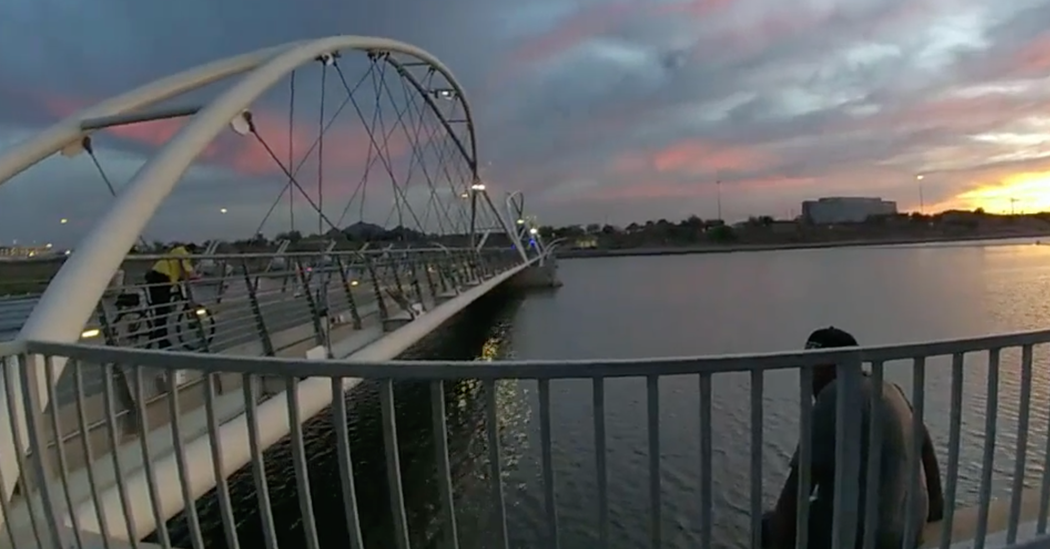 Three Tempe, Ariz., police officers are on paid leave amid an investigation into their response to a man who jumped into a lake and, despite his repeated pleas for help, drowned as the officers watched, newly released video footage and records show.

The episode began shortly after 5 am on May 28, after officers arrived at the Tempe Center for the Arts in response to a reported disturbance between a couple, body camera footage released on Friday shows.

The officers, who were not identified, found Sean Bickings, 34, and his companion, who denied having a physical argument, according to a city news release.

After to the woman, whose name was not released, the officers approached speaking Mr. Bickings. They asked him where he lived. One officer commented on the “skinny jeans” and AC/DC T-shirt that Mr. Bickings was wearing, the video shows.

Mr. Bickings, who city officials said was “unsheltered,” was not being detained, but officers told him they would check for outstanding warrants, the city’s release said. “That check had not yet been completed when Bickings decided to slowly climb over a 4-foot metal fence and enter the water,” he said.

Mr. Bickings apologized to the officers, the video shows, and plunged into Tempe Town Lake, which has a depth of six to 19 feet, near the Elmore Pedestrian Bridge.

“You’re not allowed to swim in the lake,” one officer warned, according to the video.

Footage released by the city shows 12 minutes of the officers’ interactions, though it then cuts off because of the “sensitive nature” of the remaining footage, the Tempe Police Department said.

The transcript released by the city accounts for audio, although it was not immediately clear how much of the officers’ interactions it covered.

“How far do you think he’s going to be able to swim?” an officer asked, according to the video.

An officer asked Mr. Bickings what his plan dele was. Mr. Bickings said twice that he was going to drown, to which an officer responded that he was not and that he should grab onto the bridge’s pylon, according to the transcript.

“I’m not jumping in after you,” another officer told Mr. Bickings.

Mr. Bickings swam about 30 to 40 yards “before the city soon indicating he was in distress,” said, adding that he went underwater and did not resurface.

According to the transcript, his last audible words were, “Can you hear me?”

The woman pleaded repeatedly with the officers to save Mr. Bickings, whom she referred to as her husband, according to the transcript. The officers replied that a colleague was going to get a boat.

“I’m just distraught because he’s drowning right in front of you and you won’t help,” she said, according to the transcript. About six hours later, his body was recovered from the lake.

The city has asked the Department of Public Safety and the Scottsdale police to “examine” the officers’ response to the drowning. Nikki Ripley, a spokeswoman for the city of Tempe, said it was not immediately clear how long that review might take.

She added that the Tempe Police Department had been in contact with Mr. Bickings’s parents. “City Manager Andrew Ching and Police Chief Jeff Glover believe Bickings’ death is a tragedy,” the city said in its release.

The officers have been placed on nondisciplinary paid administrative leave, the city said. The Tempe Officers Association, the city’s police union, did not immediately respond to a request for comment.

The Tempe City Council is meeting Thursday to vote on its annual budget.

“This very week, Tempe will try to give their police more of our public dollar, based on the lie that they are a public good,” Jamaar Williams, an organizer with Black Lives Matter Phoenix Metro, said in a Twitter direct message. “We’re constantly confronted with and reminded of the disparity between what the police promise us and what they do here, contribute to death.”

Joel Cornejo, a spokesman for Semillas Arizona, a Tempe-based human rights advocacy and education organization, said that the death of Mr. Bickings was another reminder of excessive policing in the city. “We don’t need more officers,” he said.