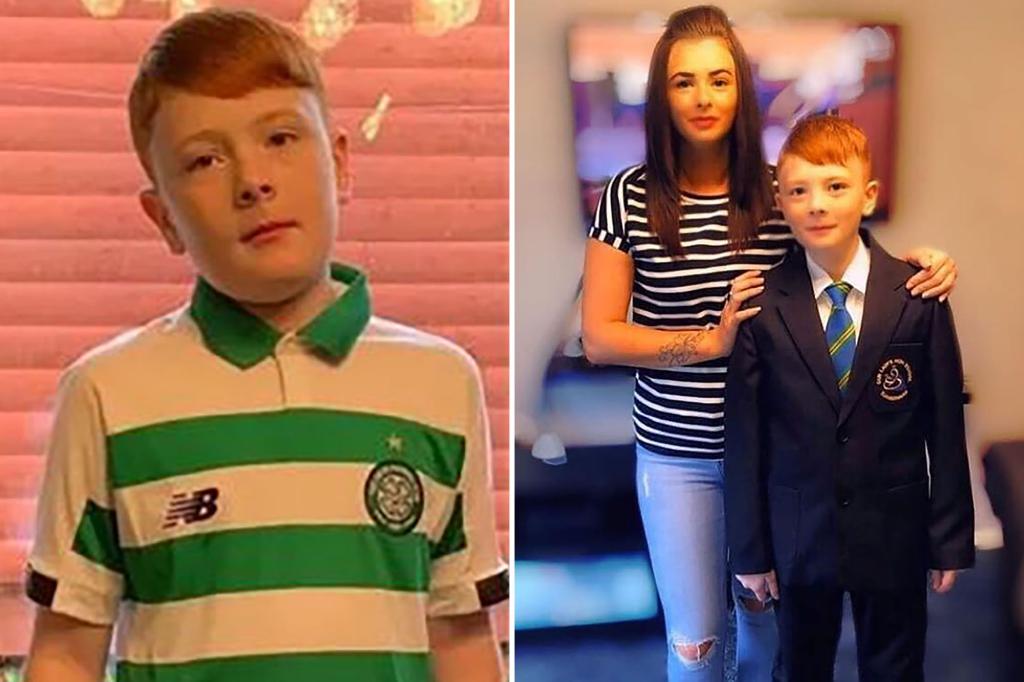 “It went horribly wrong,” Scotland mom Lauryn Keating, 30, told the Daily Record of the horrific incident, which occurred after she found her son Leon unresponsive in his room at their home in Cumbernauld, UK, on ​​Aug. 25.

“We were made aware of the sudden death of a 14-year-old boy at Ochilview Court in Cumbernauld around 8 am on Thursday, 25 August, 2022,” the police spokesperson confirmed in a statement regarding the tragedy. “There are no suspicious circumstances surrounding his death.”

Keating later learned that her son had participated in the viral blackout challenge — one of several fatal fads to circulate via TikTok — which hypes a form of self-strangulation by challenging users to see how long they can go holding their breath. This sometimes dangerous game can restrict oxygen to the brain, potentially resulting in seizures, serious injury or death.

“One of Leon’s friends told me he had been doing the challenge on Facetime with them after seeing it on TikTok,” the distraught mother recalled of the fateful day. “I had heard of this challenge, because of what happened to Archie Battersbee.”

She added, “My Leon thought he would be the one to try it first. Him and his friends probably thought it was a laugh and a joke.”

However, Brown’s attempt was terribly backfired after he fell unconscious and never recovered. “[A friend] said they thought they would wake up,” lamented a devastated Keating. “But Leon didn’t come back around.”

The bereaved parent described her late pride and joy as the “happiest, funniest wee boy ever,” adding that he was “a class clown” who “liked to make people laugh.”

She added, “Everything was always a joke and a carry on to Leon. He was just a wee cheeky boy. But he meant so much to me.”

Now, Keating is using her son’s tragic passing as a cautionary tale to prevent other youngsters from suffering the same fate.

“You just don’t expect your own child to do it,” the Scot said. “Please warn them, these online challenges aren’t worth their lives.”

“They aren’t worth ‘likes’ or whatever they are doing it for,” added Keating, who recently held a farewell ceremony in her son’s honor.

Brown’s friends and family released balloons to celebrate the teen’s memory, while a soccer jersey, signed by his buddies, was mounted on the railing at a local park, the Daily Record reported. Meanwhile, loved ones created a GoFundMe page to help Brown’s family during this difficult time.

Following the horrific incident, TikTok offered its condolences to the Keating family, writing: “Our deepest sympathies go out to Leon Brown’s family during this incredibly difficult time. The safety of our community is our priority and we take any claim about a dangerous challenge very seriously.”

The Chinese-owned video platform added that it currently prohibits content of “this nature” and will remove it if found. Meanwhile, TikTok users are encouraged to flag the challenge by clicking the symbol that says “Report.”

There has also been a string of youth deaths associated with the stunt, including the tragic incident involving Archie Battersbee in August. Just like with Leon, the 12-year-old Brit had been found unconscious at his Essex home in April after allegedly participating in the blackout challenge, the Daily Record reported. Battersbee had reportedly suffered a “catastrophic brain injury” and was placed on life support, but died Aug. 6 after his family his lost a hard-fought legal battle to continue the lifesaving treatment.

Meanwhile, on this side of the pond, TikTok is facing wrongful death lawsuits after two California girls fatally hung themselves after watching “blackout challenge” videos on the platform.

“TikTok has invested billions of dollars to intentionally design and develop its product to encourage, enable, and push content to teens and children that defendants are detrimental to its minor users’ mental health,” the lawsuit read.

TikTok did not respond to request for comment from The Post. But in the past, it has denied responsibility for the issue, saying “choking game” injuries from young people long predate the blackout challenge.