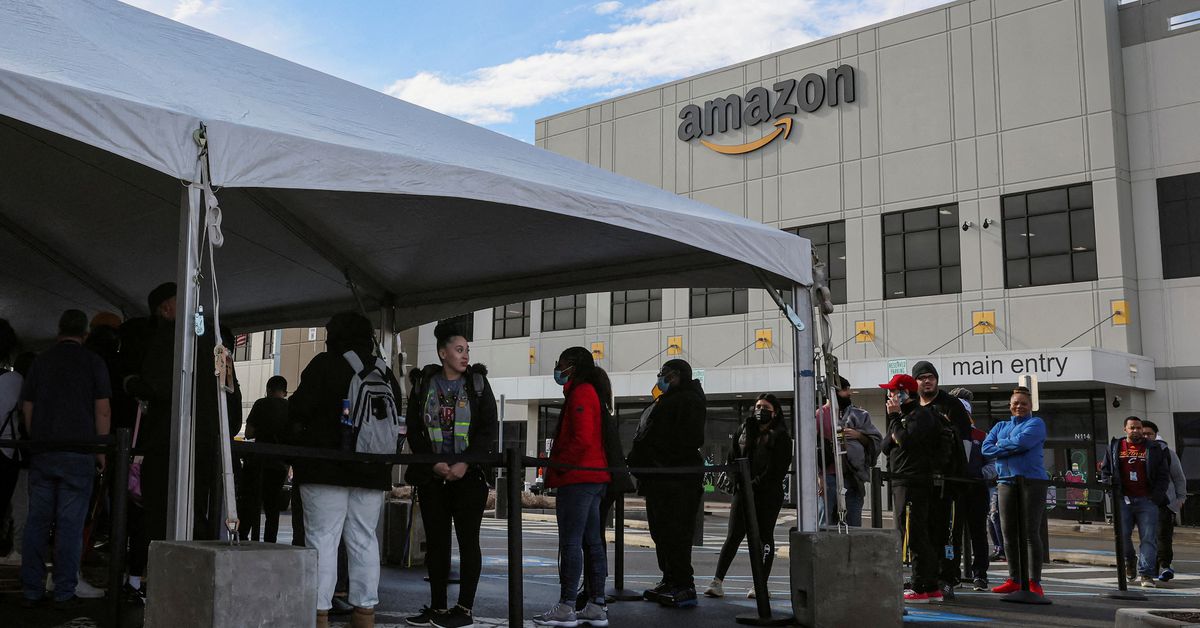 March 31 (Reuters) – Amazon.com Inc (AMZN.O) workers at a warehouse in New York City’s Staten Island have so far voted 57% in favor of unionizing with a final tally due on Friday, a potential landmark victory for organized labor at the second-largest US private employer.

But that win contrasted with 53% of Amazon workers in Alabama rejecting unionization, in a still-not final outcome.

The Alabama contest could hinge on 416 challenged ballots to be adjudicated in the coming weeks, which are sufficient to change the result, said the US National Labor Relations Board (NLRB), which is overseeing the election. The situation is far different from last year when workers sided with Amazon by more than 2-to-1 margin against unionizing.

If final results show either location voted for a union, it would be a historic first for the retailing giant in the United States and a milestone for labor advocates, who for years have considered Amazon’s labor practices a threat to workers.

In fierce campaigns, Amazon has warned about unions in notices in bathroom stalls and held mandatory meetings telling workers that labor groups could force them to strike. It has raised pay and offered bigger signing bonuses in a labor shortage, appealing to staff who have worried organizing means perpetual strife.

At the same time, union drives have picked up momentum. Nine US Starbucks (SBUX.O) stores have voted to organize, with more than 150 more elections seeking. read more Amazon workers responded to more in-person outreach by labor activists as the pandemic subsided, and a second company warehouse in Staten Island, LDJ5, will also vote on whether to unionize starting on April 25.

With nearly 2,700 ballots counted from workers at Amazon’s JFK8 warehouse in Staten Island, about 57% of votes were in favor of a union, according to a Reuters tally of the count overseen by the NLRB and streamed over Zoom. The count will resume on Friday at 9:30 am ET (1330 GMT).

Christian Smalls, a former Amazon employee spearheading the New York union effort, said, “To get to this point, it’s already history.” His group is called the Amazon Labor Union.

A union win in New York “would be a triumph for unconventional organizing campaigns,” said John Logan, a labor professor at San Francisco State University. Smalls’ group made great use of social media during the campaign and diverged from a typical labor playbook, he said.

For Bessemer, Alabama, the tally of roughly 1,900 valid balls concluded on Thursday, but the outcome is far from certain. The NLRB said it will hold a hearing in the next few weeks to determine if any of the 416 challenged ballots should be opened and counted.

Eli Morrison, a 42-year-old Amazon worker who lives in Tuscaloosa, Alabama, said he voted against unionizing and was pleased to see the union trailing. He said he appreciates the flexibility Amazon gives him to pick up extra shifts, a benefit he fears he would lose if workers unionized.

Jennifer Bates, an early backer of the Alabama union campaign, said, “The election is not over until every ballot is counted that’s eligible, and we’ll continue to fight.”

The labor group organizing the effort plans to file objections to Amazon’s conduct around the election as well, said Stuart Appelbaum, president of the Retail, Wholesale and Department Store Union (RWDSU).

Objections previously filed by the RWDSU led to a determination by the NLRB that Amazon had improperly interfered in the original contest in Bessemer, prompting the board to set aside the results and call for this year’s re-run. read more

Amazon did not immediately comment on the RWDSU’s plans to object or on the vote counts Thursday. The company has said it wants its employees’ voices to be heard and that it is focused on continuing to make Amazon a great place to work.

Regarding communications with Amazon staff during the contests, the company has said it was important for workers to know what a union would mean for their day-to-day employment.

A simple majority of votes cast is needed to win. Neither the New York union nor labor board has said how many ballots were received in Staten Island.