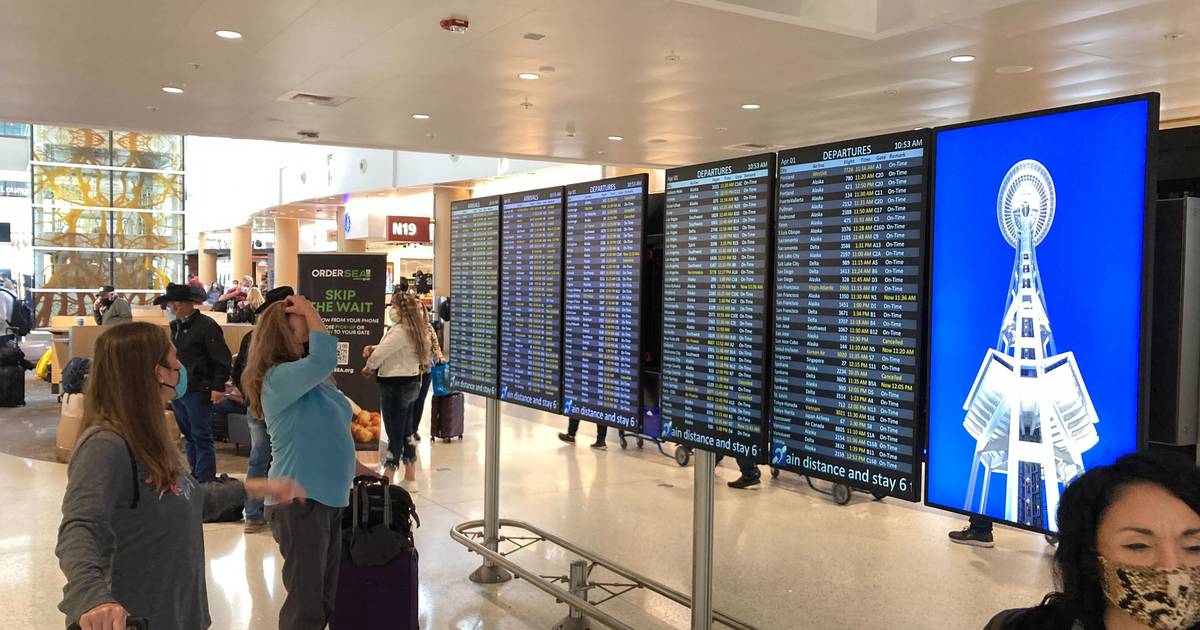 PORTLAND, Ore. — Alaska Airlines canceled dozens of US West Coast flights Friday as off-duty pilots pickedeted in several major cities over an impasse in nearly three years of contract negotiations, and the airline said more cancellations were possible through the weekend.

More than 120 Alaska Airlines flights were canceled — about 9% of its operations — and about 15,300 passengers were affected, the airline said in a statement. Canceled flights included 66 in Seattle; 20 in Portland, Oregon; 10 in Los Angeles; and seven in San Francisco, according to the flight tracking website flightaware.com. More than a dozen flights in Anchorage were also affected, according to Flight Aware.

At the same time, pilots held a rally and picket line in all those cities, according to a union website. Pilots with the Air Lines Pilots Association also protested last week in New York City outside the airline’s Investor Relations Day in a precursor to Friday’s picket. Those on the picket line Friday said they were off-duty and were not to blame for the canceled flights.

“It takes everyone at Alaska to run a successful and reliable operation. Today, we fell short. We’re grateful for all employees who are working hard to get our guests to where they need to go,” the airline said in the statement that did not mention the picking.

The cancellations come as air travel rebounds to pre-pandemic levels and demand is surging as many Americans head off on spring break for long-delayed vacations. Frustrated travelers vented on social media about botched vacation plans and reported that there was up to a 10-hour wait to speak with an airline representative about rescheduling flights. Many said they couldn’t fly out for a day or two.

Robyn Dold, of Battle Ground, Washington, had planned to fly to Missouri on Friday with her husband, daughter and son-in-law to attend her father-in-law’s funeral. The family received an email from Alaska at midnight — six hours before they were to take off — that said their flight was cancelled.

Dold spent hours Friday on hold with the airline, and then in line at Portland International Airport, only to learn Alaska could not get them to the funeral on time — or even to a city within 10 hours’ driving distance.

“We’d go with the flow if it was a vacation, but this is something that has a due date that we can’t change and it’s heartbreaking,” she said in a phone interview. “My husband is beside himself. His father was his very best friend.”

Dold, who was to deliver the eulogy, will instead watch the funeral on a one-way livestream with her husband from home, she said.

“What I think really irritates me the most, honestly, is that we weren’t given any notification ahead of time that this was a possibility. We could have made other arrangements,” said Dold. “That’s what’s really disappointing.”

Pilots on a picket line at Los Angeles International Airport said the cancellations were the result of understaffing by Alaska Airlines, which cut back during the pandemic and reacted too slowly when travel demand summarized.

“We’ve had several pilots leave for other airlines because of the quality-of-life issues at this company.”

Pilots have been in contract negotiations with the airline for nearly three years and the two sides are at an impasse.

The union says Alaska Airlines did not adequately prepare for a return to air travel after the pandemic and didn’t take the necessary steps to retain or attract pilots as demand bounced back. Issues that still need to be resolved include job security, work rules and quality-of-life provisions that provide flexibility and reasonable schedules, it said in a statement, and the current pilot contract falls well behind those at comparable airlines in several key sections.

Alaska Airlines said Friday it values ​​its pilots and respects their right to picket, but it also needs to negotiate a deal that allows the airline to maintain growth and profitability. The airline is working to recover $2.3 billion in losses from the COVID-19 pandemic, it said in a statement.

“A new pilot contract remains a top priority for Alaska,” Jenny Wetzel, vice president of labor relations for Alaska Airlines, said in a statement. “We’ve put a package on the table that’s competitive and addresses the issues most important to our pilots.”

The airline said it offers competitive salaries for its pilots. For example, an Alaska Airlines captain’s average salary is $341,000 per year, the airline said.