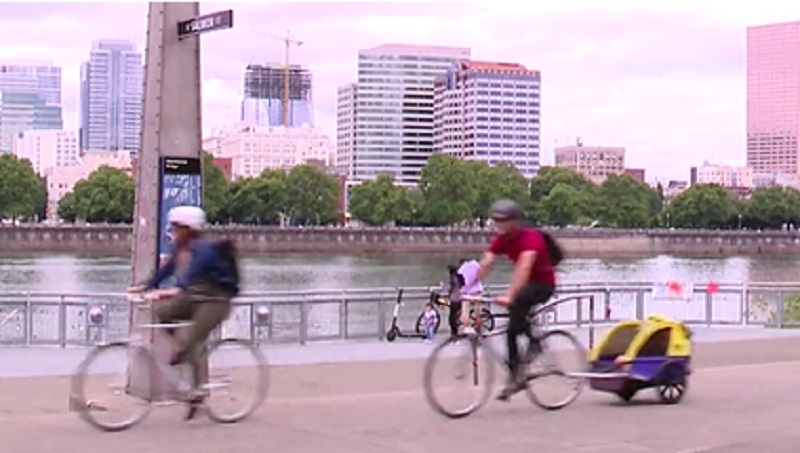 PORTLAND, Ore. (KOIN) — The man booked on bias crime cartoons after an attack on a father and daughter biking on the Eastbank Esplanade was released from jail the same day he was arrested.

The tourists from California — a family of 3, dad, wife, daughter — rented bikes from Kerr Bikes at the Salmon Springs station.

Then around 3:45 pm Saturday, the suspect, identified as Dylan J. Kesterson, allegedly commented on the family were of Japanese descent. He then began hitting the 36-year-old father in the head before repeatedly punching the 5-year-old girl in her bike helmet, police said.

Witnesses reportedly jumped in to intervention, and Kesterson began walking away. Officers found him and arrested him.

Kesterson was booked into the Multnomah County Jail on 1st- and 2nd-degree bias crime charges on Saturday. As of Sunday, however, jail records do not list his name on the roster.

Commissioner Mingus Mapps condemned the incident and said Kesterson was released from jail on the same day. His office released the following statement to KOIN 6 News:

“A bias attack on a father and five year old is horrific and unacceptable. My heart goes out to the family. We have got to bring back public safety in this town. I appreciate the work of the Portland Police Bureau in arresting this individual. I am concerned that he was released from jail the same day he was arrested.”

KOIN 6 News learned Mayor Ted Wheeler has also reached out to the victims. The mayor said he was outraged and disgusted by the incident and said he will ask DA Mike Schmidt to pursue the maximum penalty.

KOIN 6 News reached out for comment on the matter from the DA’s Office but has not yet heard back.

Commissioner Carmen Rubio, who heads the city’s Office of Equity and Human Rights, said everyone should feel welcome here — tourists and Portlanders alike.

Her office released the following statement to KOIN 6 News and on Twitter:

“I’m so sorry our guests were subject to this terrifying event and I want to personally apologize to them. No one should ever have to fear for their safety and security – whether visiting our city or living here. Everyone deserves to feel welcomed and belonging, and encounter a Portland free of racial bias and hate—especially children. Crimes like this are clear indicators of where our work and focus needs to be and why local governments working together to address our shared community issues is important.”

The father and daughter were hurt but didn’t need medical attention, police said.

This incident comes less than a month after the Chinese Consolidated Benevolent Association of Portland held a call to action to shine a light on a recent spike in Asian-targeted crime and hate within the Jade District.

“When crime happens to you, it changes your life,” said City of Portland Chief of Staff Bobby Lee. “You are never the same after you’ve been victimized.”

“Hearing that a child was struck in the face from a person that is just out to cause hate is about as bad as it gets,” Kerr Bikes Co-Manager Miles Dornfeld told KOIN 6 News.

He said when he heard what happened to the family and how emotional they were when they returned their rentals, he said he felt compelled to share kind words with the 5-year-old and let her know they are welcome here in Portland.

“That’s a horrible traumatic experience, right, and that’s probably all that’s on her mind,” Dornfeld said. “So I think that comforting words of affirmation like, ‘People love you, people care about you, no matter what race you are,’ is the main point to hone in on here.”

Kesterson is expected in court July 5 for his arraignment.