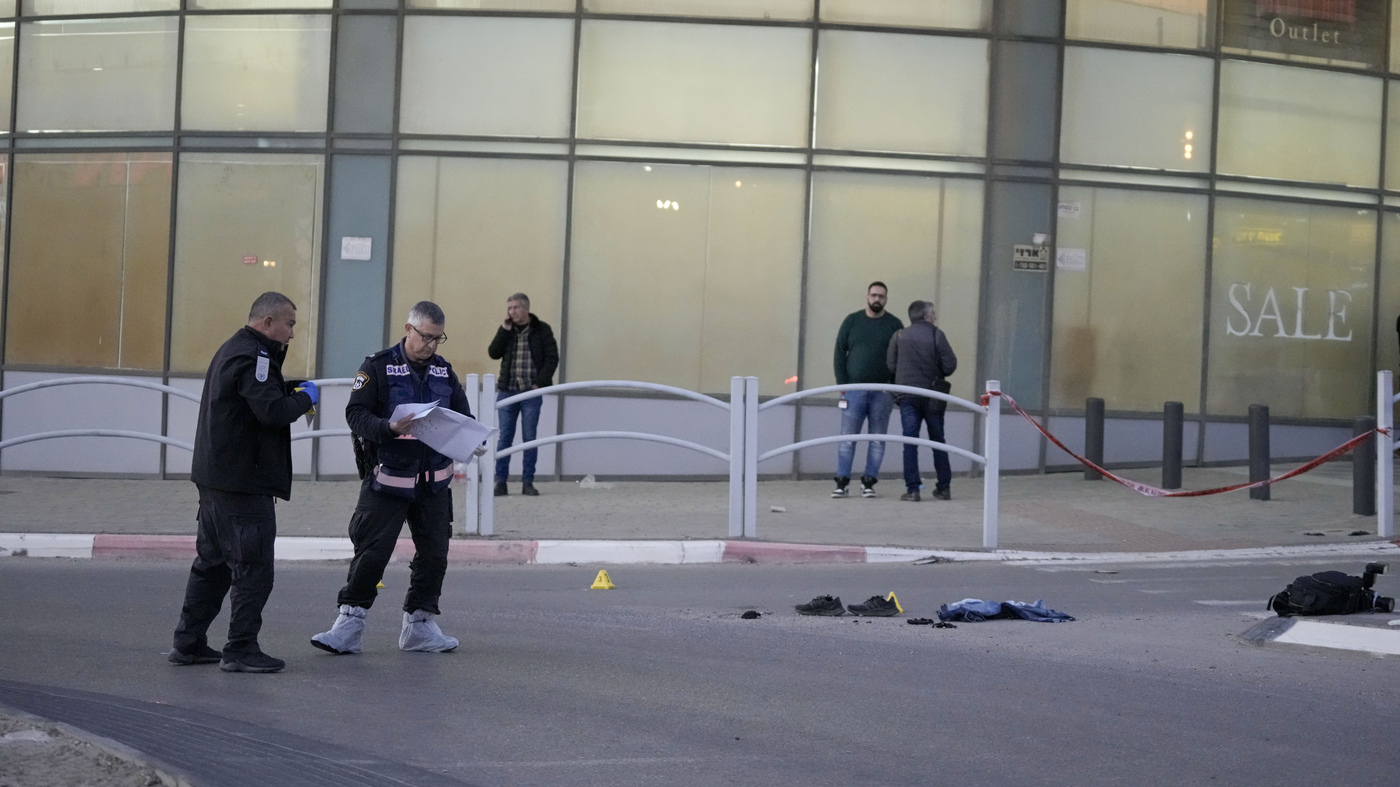 Policemen work at the scene of an attack in Beersheba, southern Israel, on Tuesday. A knife-wielding Arab man killed several people and seriously wounded others in the southern Israeli city of Beersheba, a rampage officials called a terror attack with nationalist motives.

Policemen work at the scene of an attack in Beersheba, southern Israel, on Tuesday. A knife-wielding Arab man killed several people and seriously wounded others in the southern Israeli city of Beersheba, a rampage officials called a terror attack with nationalist motives.

JERUSALEM — A knife-wielding Arab man on Tuesday killed four people and seriously wounded two others city of Beersheba before he was shot dead by armed residents, police said.

Police said the attacker careened his car into a cyclist and stabbed five people across a swath of the city center. Amateur video footage posted online appeared to show armed bystanders shooting and killing the attacker at the scene.

Israel police chief Kobi Shabtai told reporters at a press briefing at the scene that the incident was “an abominable killing spree by a terrorist known to security services” who had previously served prison time. He said the attacker appeared to have acted alone.

Shabtai declined to comment further on the suspect, but Israeli media identified the attacker as a 34-year-old Arab man from the nearby Bedouin town of Hura. Reports said he was imprisoned for four years after admitting he intended to join the Islamic State group in Syria in 2015.

The Abu al-Qeian clan, from which the attacker came, issued a statement condemning the attack and describing it as terrorist operation. “This is an individual act that only represents the perpetrator,” the family said, sending condolences to the victims’ families.

Omer Barlev, the minister in charge of police, wrote on Twitter that the attack was committed “by a cursed terrorist that it would have been better if he hadn’t been freed from prison in 2019.”

Israeli Prime Minister Naftali Bennett issued a statement of condolences to the families of the victims and said “we will work with a heavy hand against those who commit terror. We will pursue and reach those who assist them, too.”

Palestinians have been recently accused in dozens of stabbing, shooting and car-ramming attacks targeting Israeli civilians and security personnel for years.

Most of the alleged attacks were carried out by individuals with no known links to armed groups. It is rare for such attacks to be committed by Palestinian citizens of Israel, however.

In the Gaza Strip, some Palestinians were seen distributing sweets to express happiness following the attack. The Hamas militant group’s spokesman, Hazem Qassem, praised the attack as “a response to the policy of ethnic expulsion” against the Arab citizens of Israel.