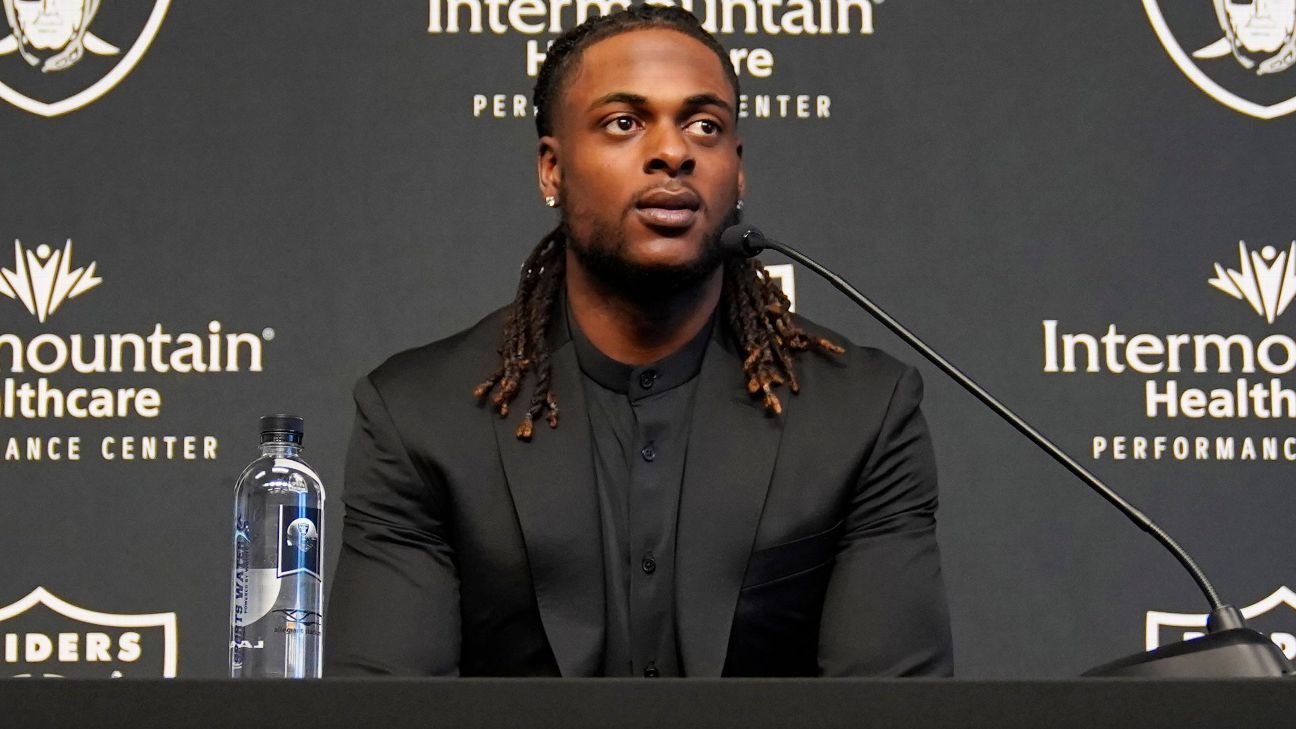 HENDERSON, Nev. — No, Davante Adams said, he and Derek Carr did not “scheme” to get him traded from the Green Bay Packers to the Las Vegas Raiders for a reunion of old Fresno State Bulldogs in Sin City.

But the All-Pro receiver and the quarterback who holds virtually every passing record in Raiders franchise history did talk. Lot

“It’s something we were definitely looking forward to, potentially, doing down the road,” Adams said in his introductory media conference at the team’s facility Tuesday, five days after the blockbuster trade that landed the Raiders Adams.

“But obviously, me playing in Green Bay, a great situation, having, you know, the greatest quarterback to play the game (in Aaron Rodgers), that’s a dream in itself. So, I’ll never take away anything away from, anything Green Bay gave me, or Aaron gave me. It was an amazing opportunity to work over there and do what I did for almost a decade. But, you know, things change sometimes. It’s not the first time that an impactful player to an organization had to leave. I feel like it worked out for both sides, ultimately.”

Adams, 29, had been slapped with the $20.14 million franchise tag for receivers by the Packers, who later received the Raiders’ first- and second-round picks in this year’s draft, Nos. 22 and 53 overall. And the Raiders got their first still-in-his-prime wideout who actually wants to be a Raider since Hall of Famer Tim Brown at the turn of the century. And Adams signed a five-year, $142.5 million extension with $67.5 million guaranteed to stay with Las Vegas and have a good college friend throw balls to him, to boot.

Yes, the Raiders, their quarterback and their fan base were definitely happy.

Adams set Packers single-season franchise records in catches (123) and receiving yards (1,553) last season and became just the sixth player in NFL history with 120-plus catches, 1,500-plus yards and 11-plus touchdown catches in the same season . He is also the only player in league history to author three seasons of 110-plus catches, 1,350-plus receiving yards and 11-plus TD catches, doing it in 2018, 2020 and 2021.

Carr, who turns 31 next week, is coming off a career-best 4,804 passing yards, though he threw a career-high 14 interceptions and was sacked 40 times, the second-highest total of his career.

“Once we got to a point where (a potential trade) was something that was realistic now, it was not just a thought, we started trying to put a little bit of a plan together,” Adams allowed. “I was traded, so it wasn’t strictly on us.

“He had to worry about getting the ball to Hunter (Renfrow) and Darren (Waller) and those guys and being a great teammate over here. And I had to do what I could to try to get to a Super Bowl. Obviously, that didn’t happen for either of us. So, once we got to a point where (a trade) was real, we started entertaining it.”

Adams said that a better “quality of life” went into his plan. That he had a lot of family in California who had never seen him play in person since college. That Las Vegas was a lot closer than Green Bay. That one of his grandmothers was recently in the hospital.

“Just kind of reflecting and thinking about life things and stuff that really in this world,” he said. “That’s the stuff that’s weighing on my mind when there’s a decision to be made.”

Plus, having grown up in East Palo Alto, California, about 26 miles southwest of the Oakland Coliseum, Adams said he was a “lifelong” Raiders fan. So joining them was a bonus.

“It’s a dream to be a Raider, man,” Adams said. “It’s a dream come true. In a third-grade yearbook, I said I wanted to be a, you know, an NFL star or an NBA star. And I was wearing a Charles Woodson jersey at the time. So, it’s been documented forever, so I guess you can say it was meant to be.”

Woodson, who played defensive back for both the Raiders and Packers and went into the Pro Football Hall of Fame last summer, has watched a lot of Adams over his career.

“The thing that makes him a special player is he’s really a guy that knows how to get separation,” Woodson told ESPN. “The most important thing between being a good and great receiver is about that separation. And more times than not, he’s going to be open.

“Down the road, that’s going to help Derek Carr.”

Adams and Carr entered the NFL together in 2014, Carr taken in the second round by the Raiders at No. 36 overall, Adams 17 selections later by the Packers.

But being reunited wasn’t the main topic of the congratulations Adams said he has received.

“Obviously, I’ve already made a lot of money. But to have this type of security, get to a place that is almost like leaving high school and going to college again, you’re a kid in a candy store. To be [in] a place where they’re happy to have you and give you all that money? It’s just a bonus. But money doesn’t buy you happiness; it can buy you a nice house. It’s pretty cool.”