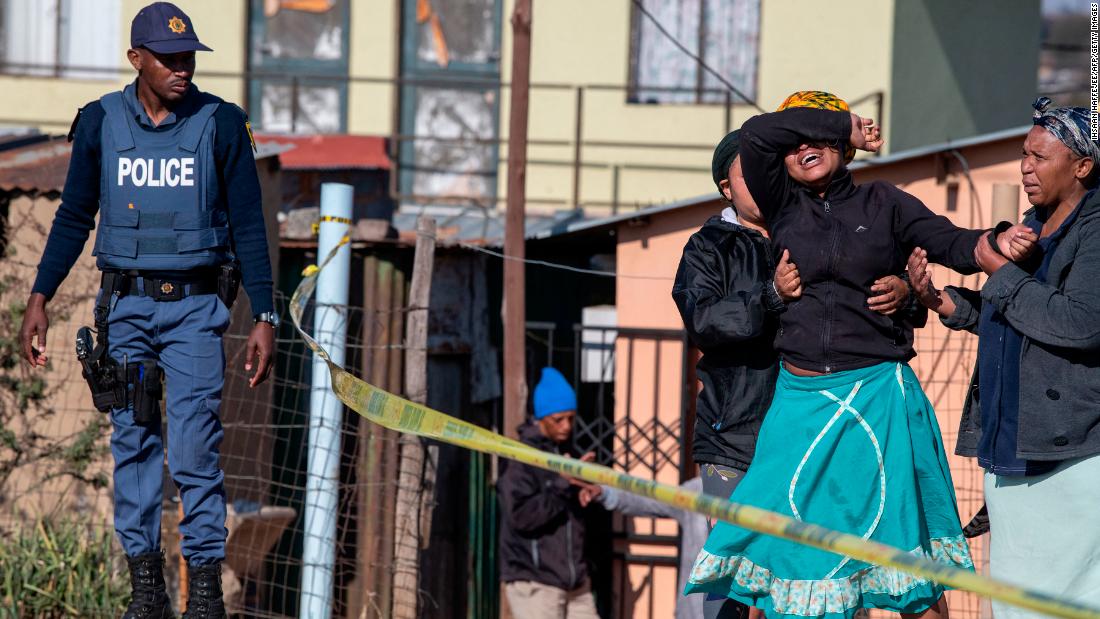 Here’s what else you need to know to Start Your Week Smart.

• At least 14 people were killed and nine more were injured in a shooting at a bar in the South African township of Soweto earlier today, local authorities said.
• Sri Lanka woke up today to an uncertain future, with both its President and Prime Minister set to step down after thousands of protesters stormed their homes in fury over the nation’s crippling economic crisis.
• President Joe Biden on Friday signed an executive order aimed at protecting access to reproductive health services in the wake of the Supreme Court overturning Roe v. Wade.
• Tesla and SpaceX CEO Elon Musk on Friday moved to terminate his $44 billion deal to buy Twitter.

July 11 is World Population Day. According to the United Nations, the world’s population will hit 8 billion this year, up from 7 billion in 2021.

The House select committee investigating the January 6, 2021, attack on the US Capitol will hold its seventh hearing beginning at 10 am ET. The committee has not yet announced any witnesses.

President Joe Biden begins a controversial trip to the Middle East with stops in Israel, the West Bank and Saudi Arabia — a foreign policy trade-off that completes the reversal of his campaign pledge to make the kingdom a “pariah.” An in-person meeting with Crown Prince Mohammed bin Salman would mark the first time Biden directly engages with Saudi Arabia’s de facto ruler since taking office. Biden has been highly critical of the Saudis’ record on human rights, its war in Yemen and the role its government played in the murder of journalist Jamal Khashoggi.

A third hearing is scheduled for two-time US Olympic basketball gold medalist and WNBA star Brittney Griner, who pleaded guilty to drug charges in a Russian court near Moscow last week. Griner, whom the US State Department has classified as wrongfully detained, faces up to 10 years in prison under the charge. Griner’s lawyers said last week they expect the court to take into account the 31-year-old athlete’s guilty plea and hope for leniency.
It’s also Bastille Day in France.

The new National Suicide Prevention Lifeline number — 988 — goes live across the US. Similar to dialing 911 in an emergency, all 988 calls will be routed directly to the national suicide hotline.

This week on the Sunday edition of the 5 Things podcast, CNN White House Reporter Natasha Bertrand previews President Biden’s upcoming trip the Middle East, which includes a stop in Saudi Arabia. We examine why Biden is now willing to meet with members of the Saudi government despite his pledge to make the kingdom a “pariah.” Listen here!

Photos of the week

Check out more moving, fascinating and thought-provoking images from the week that was, curated by CNN Photos.

‘Patagonia: Life on the Edge of the World’

This ground-breaking documentary series — which premieres tonight on CNN at 9 pm ET/PT — explores the wonders of one of the wildest places on Earth. Filmed over one dramatic year, it shows what it takes to survive and thrive at the edge of the world.

The second half of the sixth and final season of the series begins airing on AMC and AMC+ on Monday at 9 pm ET. The series finale of the “Breaking Bad” spinoff is scheduled to air on August 15.

JB Smoove (“Curb Your Enthusiasm”) and Melissa Fumero (“Brooklyn Nine-Nine”) will announce the nominees for the 74th Emmy Awards on Tuesday. Observers are anticipating a lot of love for dark dramas like “Severance” and “Ozark,” chased with a shot of laughter for comedies like “Hacks” and “Abbot Elementary.” The nomination announcement will take place at 11:30 am ET.

‘Where the Crawdads Sing’

The movie adaptation of Delia Owens’ hit 2018 novel about a girl left by her family to fend for herself in the marshes of North Carolina hits the big screen on Friday.

The men’s singles final on Center Court is just getting underway today, with Nick Kyrgios facing top seed Novak Djokovic, who came from behind on Friday to defeat Cameron Norrie 2-6 6-3 6-2 6-4. Last week, 22-time Grand Slam champion Rafael Nadal withdrew from the tournament before the semifinals due to an abdominal injury — automatically sending Kyrgios to the final. On Saturday, Elena Rybakina won the women’s singles final, claiming her first Grand Slam title and the first for Kazakhstan. Rybakina beat world No. 3 Ons Jabeur in three sets, coming from a set down to win 3-6 6-2 6-2.

The 150th Open Championship — known outside the UK as the British Open — begins Thursday on the Old Course at St Andrews in Scotland. The Open is one of the four Grand Slam golf tournaments, and St Andrews is regarded as the “Home of Golf.”

Take CNN’s weekly news quiz to see how much you remember from the week that was! So far, 55% of readers who took the quiz got eight or more questions right. How will you do?